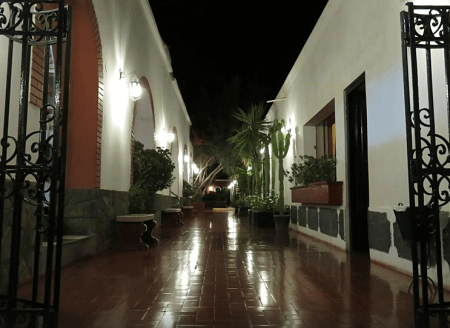 The Hotel Majoro in Nazca, Peru provides ideal accommodations for those seeking to view the famous Nazca Lines. The property has a fascinating history that goes back over 400 years and includes a conversion from a villa to a convent and back into a hotel. With 62 rooms on 60 beautifully manicured acres, this Hacienda Boutique & Resort is a true oasis for weary travelers. 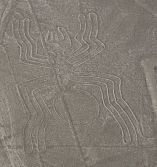 Nazca is located just inland from the southern coast of Peru, where the coastal plateau meets the Andean foothills.  Sometime between 400 and 650 AD, ancient cultures created massive geoglyphs throughout the region — some measuring up to 200 meters (660 feet) across. There are hundreds of designs ranging from geometric shapes to plants and animals like the spider featured to the left. The premises was originally founded as the Santiago de la Nasca Villa in the late 16th century. The property would become the Saint Augustus Convent from 1698 to 1910, before being converted into a Casa Hacienda (private residence). Then, in the 1980’s, the property was re-purposed as the Hotel Majoro. A 2005 remodel focused on modernizing the grounds while also seeking to preserve and restore some of the classic, old-world charm. 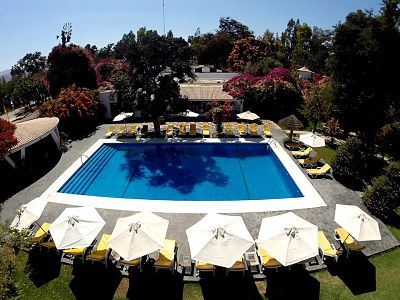 The 60-acre grounds of the Majoro are accentuated by gardens of large, colorful plants and orchards of fruit trees. It’s quite common to see a llama, vicuña or peacock taking a leisurely stroll on a warm afternoon, or even laying by the pool! The comfortable and relaxed atmosphere of the Majoro makes it very easy for all creatures to get along. In addition to the outdoor pool, the resort features a restaurant, art gallery with antiques and a craft shop with a local artisan on site.

There is a myth that the Nazca Lines can only be seen from the air when, in fact, some of them can be seen by hiking around the hills of the region. However, by air is clearly the way to go if you’re going to make the long trip from your neighborhood to southern Peru. If you’re staying at Hotel Majoro you’re in luck because the resort has its own airline for viewing the Lines, called Air Majoro. There are many other sights and activities to experience in this region too. The adobe pyramids of nearby Cahuachi were an important ceremonial place for ancient Nazca culture. There are more than 40 mounds, some of which overlook the Lines. The region also features a series of aqueducts, called the Puquios. Likely built around the same time that the Lines were created, several of the 36 aqueducts still work, although not all of them have been fully explored or excavated. With so many mysterious attractions in this region, there is a lot of material to keep those interested in ancient civilizations busy.

There is a planetarium in Nazca that tells the story of the famous lines via a nightly lecture that lasts 45 minutes, accompanied by a domed projection screen and available in up to four languages. Looking for a little adventure and excitement? You might like to try your hand (or feet!) at sun boarding (also called sand surfing) on the second largest sand dune in the world — Duna Grande, just outside Nazca. Second only to Duna Federico Kirbus in nearby Argentina, the “Great Dune” is a popular stop for adventure seekers such as surfers and skiers looking for a fun and challenging alternative.

Award Winners – Hotel Majoro is the proud recipient of the Trip Advisor Certificate of Excellence for 2013 and 2014. Just like the Nazca region itself, the resort has so much to offer. If you appreciate a good pisco sour, you’ll want to check out the pisco cellar full of delicious drinks that come right from the nearby grape plantation. This hacienda also makes 100% natural honey! Beekeepers Ana and Hugo talk to the bees and tend the hives, ensuring that honey for consumption and natural remedies is produced chemical and preservative-free. Ready to book? Contact our Travel Team to learn more about a custom tour of southern Peru. 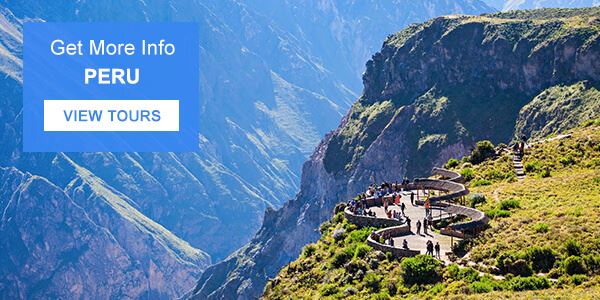