5 Bike Sharing Programs in South America – Get Out & Explore

Explore some of our favorite cities and take advantage of the great Bike Sharing Programs in South America!

Do you have a free day in your new favorite city in South America? Want to revisit some of the spectacular sights you encountered on your private city tour? Instead of exploring the city by bus, car, or subway, consider renting a bike! Many cities have made efforts to revamp street designs to include safe, designated bike lanes and created programs to make public bikes available at low-to-no-cost. Before hitting the streets on two wheels learn about the best bike sharing programs in South America.

What is Bike Sharing?

Bike sharing allows citizens and travelers to rent bicycles from automated kiosks that release bicycles for a specified fee. Many of these programs are low-cost and offer an exciting and alternate way to move about the city.

Buenos Aires may be home to the widest avenue in the world for vehicles (9 de Julio), but the city has also made increased efforts to improve resources for cyclists. The city’s Ecobici program was one of the first pioneered bike sharing programs on the continent and has grown with support. Trips lasting less than an hour are free, allowing cyclists to hop on a bike at nearly 200 automatic stations throughout the city 24 hours a day. The city has over 80 miles of protected bike lanes and paths to reach major destinations. You can rent bikes through the Ecobici smartphone app available for iPhone and Android devices.

Places to bike in Buenos Aires. When you’re in Buenos Aires pedal to the Bosques de Palermo, a relaxing park in the heart of the Palermo neighborhood. Here you will find extensive paths along with many museums including the Galileo Galilei Planetarium, the Japanese Gardens, and the beautiful Rose Garden.

If you’re thinking about visiting Buenos Aires, take a look at our recommended Best of Argentina Tour.

Santiago’s Bikesantiago program has been a success with over 1.2 million trips taken since its inception in 2013. Chile’s capital city has over 205 stations located throughout 14 communities, allowing you to cruise around the city’s top destinations. Cyclists have 133 miles of paths to choose from, and this number increases as the city continues to meet the demand for enjoyable biking conditions. For $4,990CH per day, cyclists can hop on a bike for thirty-minute trips and every 30 minutes after is an additional $500CH. Service is available from 6:30 a.m-11 p.m.  Sign up online and download the app to get started.

Places to bike in Santiago.  It is an exciting year to bike in Santiago, and the city continues to expand the Mapocho 42k bike path. The bike path follows the underused banks of the Mapocho River that flow throughout the city. Eventually, the road will extend over 26 miles and pass through 8 communities along the route. Interested in visiting Santiago while you explore the diverse landscapes of Chile? Contact one of our travel consultants to start discussing tour options today!

Interested in visiting Santiago while you explore the diverse landscapes of Chile? Take a look at some of our TOP CHILE TOURS ONLINE.

Bike up and down Rio de Janeiro’s world famous beaches on the city’s 280 miles of bike paths. Since 1992, the city has continued to expand its bicycling infrastructure and today it ranks among the top 20 cities in the world for bike riding. Rio de Janeiro’s SAMBA program started in 2008 and today boasts 60 rental stations throughout the city. Monthly passes are available for $10R, and the BikeRio mobile app can be downloaded for Apple and Androids phones. Passes allow users to rent a bike for up to an hour, every hour following is $5R. SAMBA bikes are available from 6 a.m. – 12 a.m., seven days a week. Places to bike in Rio de Janeiro. If you happen to be in town on a Sunday or a holiday? Each Sunday, one of the main avenues along the waterfront is closed to vehicles, so bicyclists and pedestrians can use the lanes at leisure. This is an excellent and relaxing way to explore the picturesque views of the city and its many beaches.

Biking and relaxing in Ipanema or Copacabana are only a few clicks away. Explore our TOURS OF RIO DE JANEIRO.

Ranked as the 2013 Innovative City of the Year, Medellín has seen tremendous urban development over the past decade. Along with its world-class gondola system and state-of-the-art libraries, the Encicla Bike program aims to continue this transformation. As the city adds bike lanes to its existing 19 miles of bike routes, visitors can rent bikes from 50 stations throughout the city. The Encicla program is free for the first hour and bikes can be rented Monday through Friday from 5:30 a.m. until 7:00 p.m. Like Santiago, Medellín is reinvesting in the space surrounding its main river. In an ambitious plan, the city is set to bury its existing highway underground and create a park in its place. This proposed 12-mile linear park hugging the Medellín River will allow cyclists and pedestrians to enjoy the heart of the city without the noise and pollution of the city’s many cars.

Take a look at our Colombia Tours for ideas on how to visit Medellín.

Quito’s free BiciQ program complements the city’s newly improved bike lanes and paths. The program started in 2012 and currently has 25 stations located throughout the historic core and northern half of the city which allow travelers to pedal around Quito’s top destinations. You can rent BiciQ bikes from 7 a.m. until 7 p.m. every day of the week. Places to bike in Quito. Like Rio de Janeiro, the city prohibits cars to enter an 18-mile street route for the Ciclopaseo event every Sunday from 8 a.m until 2 p.m. Cyclists can enjoy the road free of cars and pass through the colonial center of the city and Carolina and Ejido Parks. This event gives travelers an excellent opportunity to revisit top destinations found on tours such as the Quito, Cuenca, and Avenue of the Volcanoes Tour.

To start planning your tour through South America, contact our expert Travel Consultants at 1-800-747-4540 or create your custom itinerary online. 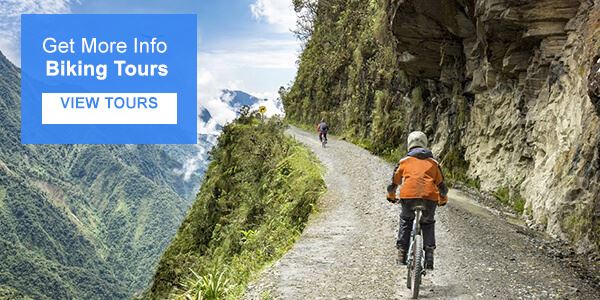