The Best Galapagos Islands to Visit

Charles Darwin described The Galapagos Islands as “a little world within itself,” due to its varied wildlife and bizarre landscapes. There is an assortment of rare species such as giant tortoises, brightly colored marine iguanas, and blue-footed boobies that live in this archipelago. Due to the Galapagos Islands volcanic history, the lavascape contrasts dramatically with the blue waters, making this a favorite spot for photographers!  Depending on which island you are visiting, will determine what kinds of animals you will see and the activities you can enjoy. It is important that you learn what each island has to offer so that you can choose an itinerary that reflects your interests. Read on for our list of the Best Galapagos Islands to Visit and see what best fits your travel style. Feeling ready to plan your dream trip to the Galapagos Islands? Explore one of our multi-country tour options like our Galapagos and Machu Picchu Tour!

What to do on San Cristobal Island: 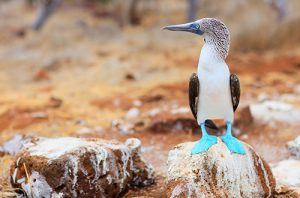 On San Cristobal Island, swim around the white coral beach, and spot numerous bird species at Brujo Hill. The seabirds found here include the blue-footed booby, Chatham mockingbird, and the San Cristobal lava lizard. The latter two are unique to this island. If you want to dive deep into the water, try scuba diving at Kicker Rock Islet! Kicker Rock Islet is a perfect place to see sea lions, stingrays, sharks, octopi, barracudas, and other neon colored fish. Other attractions include Lobos Island and Pitt Point Islet. Lobos Island is home to sea wolves, seals, and small birds. Pitt Point is lush with cacti, trees, and small shrubs. This terrain provides an enjoyable area for short treks where you can see sea turtle nests and the blue-footed booby mating dance.

Second on our list is Espanola Island. Espanola is the oldest island and is one of the best places to experience wildlife in the Galapagos Islands.

What to do on Espanola Island: 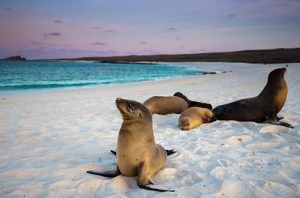 Visit Suarez point, as it is the only place in the world where albatross nest. After checking Suarez point off your list, walk around the island to see the blue-footed booby colonies, sea lions, and marine iguanas. In the fall, you can see the sea wolves’ colony during their mating season at Gardner Bay. For some fantastic views of Espanola, head to Osborn Islet, where snorkeling with fish and sea lions is available.

Next on our list is Floreana. Floreana was inhabited by pirates and whalers in the 1600’s and then used as a penal colony. Due to human disturbances and the introduction of non-native seeds and animals, the flora and fauna have been wiped out. However, this does not take away from the natural beauty of Floreana.

What to do on Floreana Island:

Cormorant Point has a few beaches that you can relax at, amongst the bright pink flamingos. If you’re lucky, you may see dolphins swimming in the water. Beyond the allure of the blue water, there are plenty of cacti and bushes making Floreana Island a favorite amongst plant enthusiasts. For a splash of education, take a trip to Post Office Bay. Learn about the history of the human experience, of whalers and pirates, in the Galapagos Islands. Today, you can send a postcard from here, as long as you take a few to send to fellow travelers.

Walk the trails of the Opuntia Cactus Forest on one of the oldest islands in the Galapagos.

What to see on Santa Fe Island: 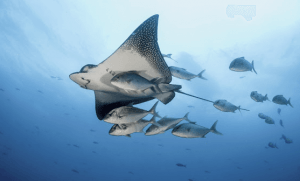 There is always something to see at Santa Fe! Turn your iPhone on “do not disturb,” and keep your eye out for manta rays, sea turtles, sea lions and giant iguanas lounging on the beaches and rocks.

What to see on Santa Cruz Island: 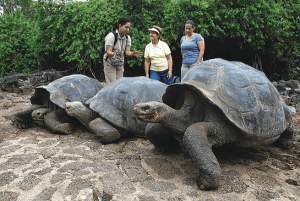 Los Gemelos (the twins) are two craters that formed with the collapse of a magma chamber. Explore this volcanic region by walking through lava tunnels. Puerto Ayora is the main town, which houses the Galapagos National Tourism offices, and where the famous Galapagos tortoise rests. Here, they study and breed these gentle giants, weighing up to 900 lbs and living over 100 years! Princes Ranch and the El Chato Tortoise Reserve are two additional locations that allow you to see giant tortoises in their natural habitat. If you’d rather swim with sea turtles or begin birdwatching, make your way to Las Bachas Beach, where both those activities are encouraged.

We’re halfway through our Best Islands in the Galapagos to Visit! Isabela Island was formed by six volcanoes and sits on the equator. It is known as the largest of all the islands. In the 1600s, Tagus Cove housed pirates, buccaneers, and whalers. Today, people call Isabela Island home and make their living from fishing, agriculture, and tourism.

What to see on Isabela Island: 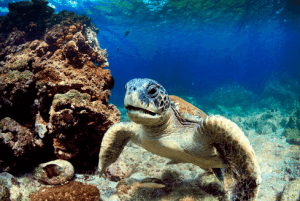 Isabela is a great destination to see flora and fauna. The wildlife is unique to this island because there are newer lava fields. In different parts of the island, you’ll find various types of land and marine life. There are six species of wild tortoises on Isabela Island. You can see the Sierra Negra Volcano, which has the second largest caldera in the world. Go on a hike to the volcano where you can see great views of Fernandina Island. This island is home to sea lions, turtles, marine iguanas, rays and reef sharks. More attractions on Isabela Island include:

Baltra was a US Army Air Force base during World War II. Today, it is where you may find yourself flying in or out.

What to see on Baltra Island: 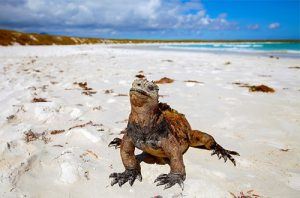 The Galapagos Conservatory is trying to re-introduce the Galapagos Land Iguana, so you will see them in increasing numbers over the next few years. Sea lions and birds are often spotted here as well.

This quaint island located only about 100 meters from Baltra is a bird lover’s paradise.

What to see on North Seymour Island: 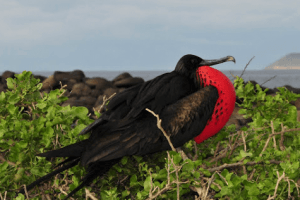 Due to its brushy vegetation, you will find one of the largest populations of blue-footed boobies, swallow-tailed gulls, and frigate birds. May is mating season, so if you’re visiting at this time, entertainment will be provided by the male boobies strutting their stuff for the females!

One of the youngest and most photographed islands is Bartolome. This island attracts tourists due to its colorful volcanic rock formations. If you have the energy, try climbing some of the rocks for a spectacular view of the other islands.

What to see on Bartolome Island: 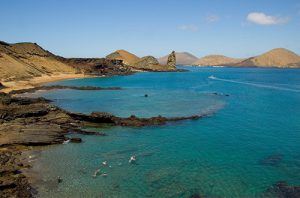 Swimming and snorkeling around Pinnacle Rock are very popular here. You will most likely spot penguins, green turtles, tropical fish, and reef sharks. Pinnacle Rock is one of the most photographed landmarks in the Galapagos. But if the amount of people snorkeling is overwhelming you, you can always enjoy a dip in the bay.

This western island is the result of two overlapping volcanoes, which creates great feeding grounds for many animals.

What to see on Santiago Island: 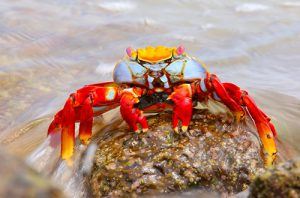 The lava rock creates tide pools full of crabs and other small marine life. Sea lions, turtles, and marine iguanas relax on the beach while Darwin finches and Galapagos hawks fly overhead. If you are interested in geology, you can observe lava flow in Sullivan Bay.

Mostly known for its red sandy beaches, this island is preferable for bird watching and photography.

What to see on Rabida Island: 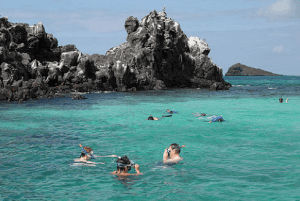 Pink flamingos enjoy the saltwater lagoon while brown pelicans nest in the salt brush. You’ll see marine iguanas and sea lions lounging on the beach. If you are interested in swimming and snorkeling, you can see sea turtles, rays, eels, reef sharks, and penguins.

Last on our list is Fernandina Island. Fernandina was formed by the Galapagos hotspot and is the smallest of the archipelago. With only one tourist site, this island is considered one of the most pristine.

What to see on Fernandina Island: 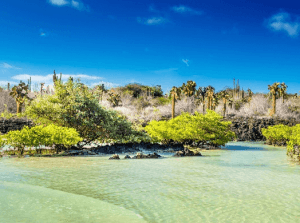 Due to the cold waters, the flightless cormorants and Galapagos penguins tend to make an appearance. The only site available to tourists is Punta Espinosa, which consists of a small trek around the peninsula. Here you can see lava cactus, marine iguanas, snakes, and birds. It is also a great place to dive to see penguins, sea horses, sea turtles, various sharks, and rays.   Pro tip: When booking, keep in mind that, the Ecuadorian government protects the 13 main islands and six smaller islands, therefore you can only visit the islands with a tour company and approved tour boat. For more information about the Galapagos Islands, read the Best Times to Visit the Galapagos Islands.

Contact one of our Travel Consultants today to make your Galapagos Islands vacation a reality! 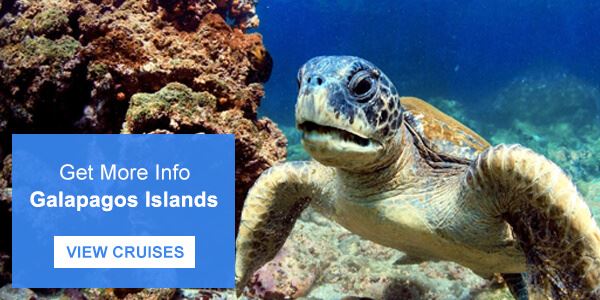 Rebecca Deering arrived in Argentina in 2008 looking for an adventure and found it in the city of Buenos Aires. She lived there until 2014 and during this time had the opportunity to travel extensively through South America. She married her Argentine husband, Felix, in 2016 so she considers Argentina to be her adopted home country. She continues to explore new places and cultures within South America and the world. She has spent time in Colombia, Ecuador, Peru, Bolivia, Chile, Antarctica, Argentina, Uruguay and Brazil. Her favorite areas of South America (so far) are the Amazon Rainforest in Ecuador, Colca Canyon in Peru, Uyuni Salt Flats in Bolivia, the Atacama desert in Chile, Los Glacieres National Park in Argentina, Jose Ignacio in Uruguay, Ouro Preto in Brazil and Parque Tayrona in Colombia. She also has done two 9-day fly-cruises in Antarctica. Still on her bucket list is Paraguay, the Pantanal Wetlands and Easter Island. Rebecca currently resides in Austin, Texas and travels between all of SouthAmerica.travel's offices.

When she’s not traveling to South America, she enjoys perusing vintage shops, reading true crime books and spending time at the lake with her dog, son and husband.