The cities of South America are open-air galleries, and the streets and facades of the built environment are the perfect canvas for some of the best contemporary art in the world. Read about the Best Street Art City Tours in South America by travel expert, Martin Kaleta. Messages and figures on walls are ingrained in the cultures and histories of the continent for millennia. What has been frowned upon as vandalism elsewhere in the world, has taken an increasingly artistic and community focused turn as governments have weakened laws targeted at artists. Whether political, abstract, or humorous in nature, art belongs on the streets of the ever growing and evolving cities of South America. You are bound to come face to face with many fascinating pieces from local and international artists while you are traveling. If you are curious to learn about the artists, the themes behind the pieces, and the techniques used, you are in luck! Below are some of the best cities that offer day tours to teach you about the history and context of Street Art in South America.

The capital of Colombia has become a top destination 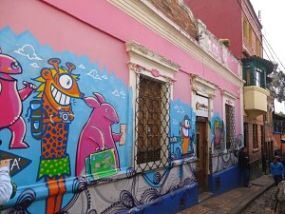 for artists and enthusiasts alike as city officials and police forces have relaxed their views on graffiti. Artists are now able to spend more time on highly stylized pieces which can be found throughout the city and in the historic district of La Candelaria where your excursion will start. Colombia’s natural diversity, cultural identity, and political history heavily influence the colorful paintings you will find as you walk along the streets of Bogota.

Valparaiso has long been a haven for artists, its hilly landscapes and colorful 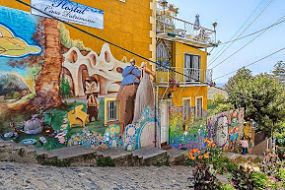 facades attract visitors from around the world. The coastal city is Chile’s cultural capital and a UNESCO World Heritage Site known for its 19th and 20th-century architecture and transportation system of funiculars up and down its hillsides. The hills of Carcel, Alegre, and Polanco are home to many exciting places and uniquely painted stairs throughout the city will make your ascent more pleasant. Templeman Street on Alegre Hill and the Open Air Museum of Valparaiso on Bellavista Hill are essential stops for any graffiti connoisseur.

Although the multicolored houses of La Boca a 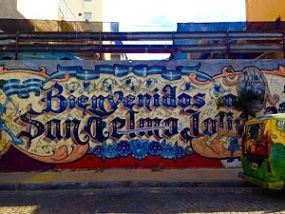 nd the Casa Rosada may be the traditional, colorful icons of the Porteño City, Buenos Aires’ energetic and eclectic street art is their modern counterpart. On every block in Buenos Aires, you are bound to find a mural, stencil, paste-up, or sticker that will grab your attention. Guided tours are divided into northern and southern neighborhoods where you can visit artist studios and purchase pieces to bring home a part of the lively streets. For an overview of the different street art tours offered in Buenos Aires, read more at Spot the Best Murals on a Buenos Aires Street Tours.

Medellin has caught the world’s attention with its radical improvements in infrastructure and focus on social urbanism. Along the hillside escalators that whisk you through Comuna 13, you will find some of the best street art in the city. Local tours are guided by the artists themselves and gives you a unique look into the community’s evolution and investment in its citizens. Additionally, the city celebrates Pictopia Medellin, an annual street art festival where local and international artists gather together to paint and empower a neighborhood of the city. In 2015, 27 artists from around the world took to the streets of the industrial neighborhood of Barrio Colombia to brighten the surroundings and strengthen the sense of pride in Medellin.

South America’s largest city has a long and vivid history in street art and artists paint the vibrant culture of Brazil onto every surface imaginable. While you’re in Sao Paulo head to Batman Alley in Vila Madalena. The alley received its nickname from a Batman piece painted decades ago and continues to evolve with works by both established and up-and-coming artists. Another less visited destination is the residential neighborhood of Cambuci, where the world famous Os Gemeos honed their craft for creating colossal and brightly painted human figures. Want to explore the different hubs of street art across South America? Start planning your street art tour and fully customizable land package today. Visit us at SOUTHAMERICA.TRAVEL. 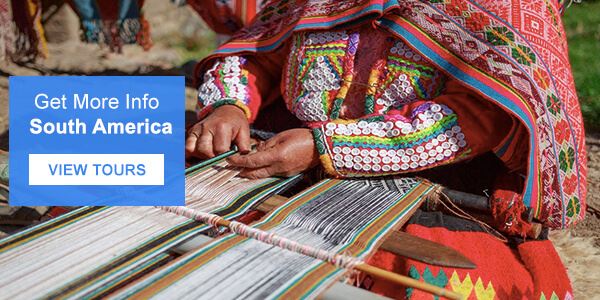