Check out our latest Brazil Travel Video from Travel Consultant Jon Hillstead! Click play and transport to Brazil! Feel the rhythm of Brazil’s African soul in Salvador da Bahia and discover the beauty that is Chapada Diamantina National Park.

After living in Brazil for 6 months, Jon went on the Diamonds & Hiking in Chapada Diamantina Tour, which features two of Brazil’s most popular destinations, Salvador da Bahia and Chapada Diamantina National Park. Tag along on his journey to Salvador, as he takes us through the colorful and lively streets. Then, dive underwater and snorkel underneath the cave-encompassed lagoons; the crystal clear water provides an excellent look at the marine life below. Finally, follow his footsteps as he hikes the steep mountains of Chapada Diamantina National Park. https://youtu.be/8ZofvDzjr_0

Chapada Diamantina & Lençóis – Jon’s favorite part of the trip was seeing how diverse Chapada Diamantina National Park was. His favorite activities in the park include hiking, swimming, and snorkeling inside the caves. At night, he experienced the lively streets of Lençóis, where there was nothing but good vibes and delicious restaurants. Read more about Jon’s experience in Chapada Diamantina >> Salvador da Bahia – Jon was captivated by the African influence in Salvador both with the livelihood of the city and the incredible food.  A highlight for Jon was relaxing on the shores of Morro de Sao Paulo; this was the perfect ending to his trip. From the beautiful blue waters and white sandy beaches, and the laid-back atmosphere, this part of the trip suddenly became the cherry on top.

Are you ready to venture to Brazil? Visit us online at www.SouthAmerica.travel and check out some of our favorite Brazil Tours. 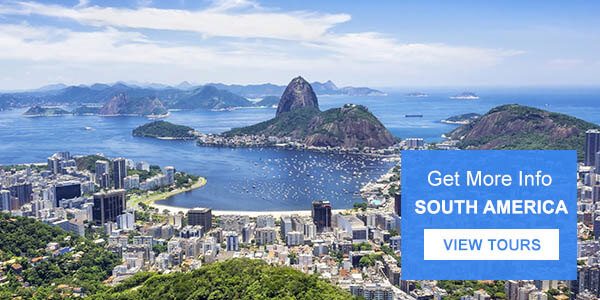 Jon was born in Los Angeles, California, raised in the Pacific Northwest and currently calls Seattle home. His interest in travel and South America began while he was studying abroad in Ecuador. Living and working in the Ecuadorian Amazon, he became intrigued with the indigenous Kichwa culture and local way of life. This sparked his interest to continue to explore other parts of South America. From Ecuador, he traveled south to Peru from the northern beaches of Mancora to the southern tip of the country on the shores of Lake Titicaca. Since living in Ecuador he has traveled to Chile, Argentina, Peru, and spent a year living in Rio de Janeiro, Brazil where he adopted the local Carioca lifestyle.

Some of Jon's highlights traveling in South America include swimming with manta rays in the Galapagos, hiking the W trek in Torres del Paine, cruising the Amazon aboard the Tucano, and watching the sunrise over Machu Picchu. His ideal trip would include a combination of adventurous activities, wildlife and time relaxing on the beach. With his love for adventure, the outdoors and his passion for travel, Jon hopes to inspire others with his experiences to make South America their next travel destination.