With so much to see and do attracting superlatives from every corner, how on earth do you go about choosing the best South American country to visit? With 12 countries covering nearly 18 thousand square kilometres, you might need a helping hand to find out which is the best destination for you, so here is a run down of the major highlights to help with your planning: 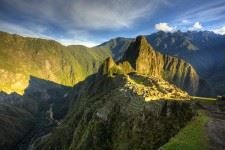 Going to Peru without visiting Machu Picchu would be like going to Paris without seeing the Eiffel Tower: after all, it is one of the new Seven Wonders of the World! Improbably perched at 2,430 metres (7,970 feet) above sea level, the remote location of the city is at once stunning as well as providing a perfect explanation for why it was never discovered by the Spanish.

Another remnant of civilisations past can be found in the Nazca lines. There are plenty of theories about why these huge figures were etched into the desert sand – astrological, religious and agricultural – but ultimately, scientists haven’t reached a definite conclusion. The theories are best mulled over from the seat of a light aircraft as you view the monkey, spaceman and other friends from above. Moving on from the man-made, Peru also has a few tricks up its sleeve when it comes to natural attractions. How about a spectacular valley, hidden in the Andes Mountains that’s over twice as deep as the Grand Canyon? At Colca Canyon, you can admire the view, and keep an eye out for the emblematic llama, their close relatives the alpacas, shy vicuñas, and even the giant Andean Condor, riding high on the thermal air currents above the canyon. Get all the highlights on one trip: check out our Essence of Peru Tour 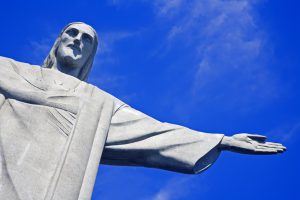 Another South American country, another one of the new Seven Wonders of the World: this time, it’s the iconic Cristo Redentor, better known as the statue of Christ the Redeemer. Standing atop the Corcovado Mountain overlooking Rio de Janeiro, the fifth largest statue of Jesus in the world has His arms open in a symbol of peace. Christ the Redeemer can be visited by riding the cogwheel railway to the top, or for yet more views of Rio and it’s spectacular ocean setting, take the cable car up to the peak of Sugarloaf Mountain, another Rio landmark. It could be argued that Brazil is the best South American country to visit if you’re looking for dynamic, culturally rich cities. Apart from Rio de Janeiro, the other big draws for urban sightseeing are São Paulo, the largest city in the Southern Hemisphere, full of historical landmarks; and Salvador, centre of Afro-Brazilian culture, rich in colonial architecture and known – rather charmingly – as Brazil’s capital of happiness on account of the famously easy-going locals.

But wait, Brazil isn’t all bustling metropolises: 60% of the largest expanse of tropical rainforest in the world is located here. Visiting the Amazon rainforest is a dream for many, whether you’ve always wanted to see Pink Dolphins playing in the Amazon river, go Piranha fishing, or to simply sit back and watch the sunrise over the jungle canopy, accompanied by a chorus of tropical birds. Whether you choose a cruise through the amazon, or a stay in a jungle lodge, the experience won’t be easily forgotten. See all these sites in Brazil and more with the South America Deluxe Tour. 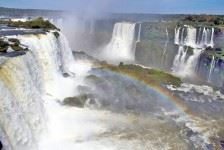 Argentina’s claim to being the best South American country to visit is based on a unique mix of European heritage in combination with some equally unique natural sights. Iguassu Falls are another one for the ‘Seven Wonders’ list, this time for the New 7 Wonders of Nature. At a third higher than Niagara Falls, Iguassu Falls (which are actually shared between Argentina and Brazil) are made up of 275 individual cascades where the Iguassu River plunges dramatically off the Paraná plateau. A network of walkways allow you to get up close to the falls, at one point being surrounded on three sides by vertical walls of water. As for the unique culture, half the nations of Europe seem to be represented somehow in the capital of Buenos Aires. The architecture projects Parisian grandeur, the cuisine has a distinct Italian flavour, and the preoccupation with ‘tea-time’ will make you wonder if you’ve landed in Britain in a bygone era! Of course, not all the heritage is borrowed: the tango is a cultural phenomenon that belongs solely to the Argentine capital, and no visit would be complete without a tango show, or trying a few steps yourself at one of the many milongas (tango dance halls) found in every district. Can’t decide which is the best South American country to visit? The South America Deluxe Tour takes in the best of Argentina and Brazil, and can be extended to include Peru’s Machu Picchu.

See our brochure for full details of these itineraries: 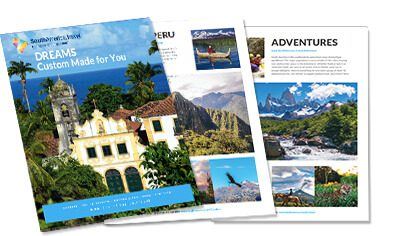