Kingdoms of the Sun and Moon 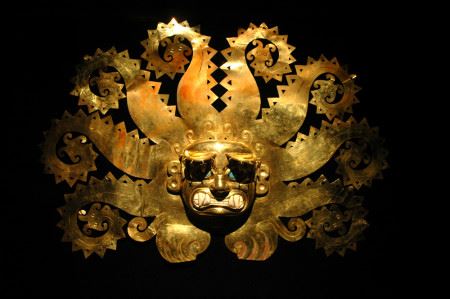 An interview with Dr. Barbara Brotherton, Native Art Curator of the Seattle Art Museum on the Peru: Kingdoms of the Sun and Moon exhibit showing at the Seattle Art Museum October 17-January 5. This autumn and winter, the Seattle region can count on getting more a little more sun than usual. From October 17 to January 5, the Seattle Art Museum is hosting artwork from the sun-worshiping Incas in an exhibit that promises to dazzle the eyes. Golden masks, including one of a cat’s head covered in octopus tentacles and studded with chrysocolla turquoise, are just some of the highlights of one the most comprehensive Peruvian exhibits ever to be shown in the United States. Peru: Kingdoms of the Sun and Moon will feature pre-Columbian artifacts from Peru’s first great civilizations, such as the Moche, the Chimu, and the Lambayeque, who flourished well before the time of the Incas, one of the Americas’ most powerful empires. The exhibit integrates collections from Peru, Canada, Europe, and the US. Some of the pieces on display have never been shown outside of Peru. “We just feel incredibly honored to have this show here in Seattle. It has been a work in progress for five years,” said Dr. Barbara Brotherton, the Native Art curator of the Seattle Art Museum. “This show is like the King Tut of the 20th century,” continued Dr. Brotherton. “Peru is really on the level with the great first civilizations of Egypt, India, and Mesopotamia. Peru is now coming of age with all these new discoveries in the past 20 years. We’re learning more and more about these ancient civilizations, and there are still so many discoveries on the horizon.” 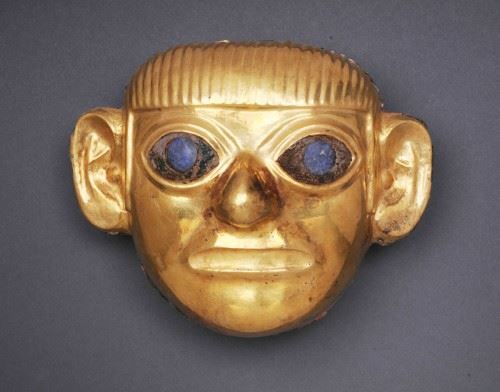 Many of these pre-Columbian pieces slept for centuries in the dry and dusty deserts of northern Peru.  The royal tombs of Sipan, for example, were unknown until a group of archaeologists led by Dr. Walter Alva excavated them in the 1980s. Dr. Walter Alva will be lecturing at the Seattle Art Museum.

Among the many treasures found was a spectacular golden Mohica head ornament, the centerpiece of the show. Its story of looting and eventual return to Peru is almost as spectacular as the ornament itself. There were rumors of a private collection from Peru being shown in Central America, Spain and other parts of Europe, explained Dr. Brotherton. The Spanish government received an offer to purchase the collection, and eventually word got out that these were stolen Peruvian pieces. Ownership was hotly contested between 2006 and 2008, until the Scotland Yard was sent in and eventually recovered the collection to the Peruvian government. Besides golden masks and ornaments, some other pre-Columbian artifacts are sure to cause a stir. There will be several pieces on display from the Larco Museum in Lima, which is known for its extensive pre-Columbian erotic art exhibit, including, among other pieces, a candle holder of a woman performing frottage on a reclining male. Mohica ceramic vessels of imaginative shapes and sizes have amused since the 1st century A.D. But there are also pieces depicting anthropomorphized deity figures, such as the potato, a crop that originates from Peru. Today, Peruvian farmers grow over 3000 varieties of potato.

On to the Incas & Machu Picchu 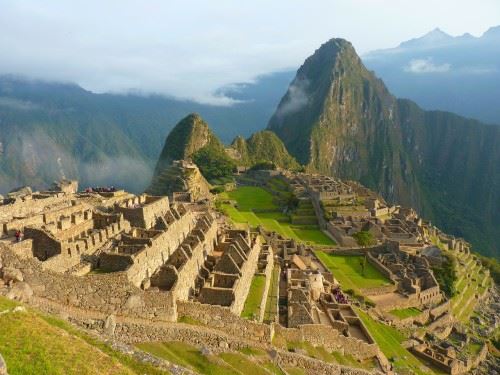 The Incas are an integral part of Peruvian history and present-day identity. In Peru even today, admiration among Peruvians for their Inca roots and culture is apparent. From the spectacular and varied museums in Lima and Cusco dedicated to Inca art and history, the legacy of the Incas is not merely a kitschy tourist trap. Quechua, a language similar to that of the Incas, is even an official language of Peru. Somehow, the Incas were able to unify 8 million people who spoke several different languages over a swath of land that covers present-day Peru, northern Chile, eastern Bolivia, Ecuador, and even parts of Colombia. And yet, they had no written alphabet. Instead, they used quipus, knotted cords that were used for recordkeeping. An Inca quipu will be on display. But Peru has much more to boast about than just the Inca Empire. “The Incas were a culmination of the 3500 previous years of great civilizations that mastered the artistic of ceramics, gold, silver, and carved wood,” explained Dr. Brotherton. The Incas were impressive in that they unified 8 million people over a span of just two centuries, and they were remarkable architects who built stone structures more durable than Spanish colonial structures. But they used Chimu ceramic artists to make pottery, and they borrowed from other peoples for their gold and silver workings. Still, it would be hard to hold an exhibit on Peruvian art and not mention the awe-inspiring site of Machu Picchu. In fact, some original photographs from the 1911 Hiram Bingham expedition will be on display. These stark black-and-whites on silver gelatin plates reveal a Machu Picchu unkempt and unused for several centuries. The Spanish never found this site during their quest to conquer the Incas, and the Inca royal family abandoned the site in favor of an even more remote area in the Peruvian Amazon Rainforest. In the ensuing centuries, Machu Picchu was all but forgotten, except for a few local farmers. In 1911, the adventurous Hiram Bingham, a Yale professor with a hankering for fame and fortune, had a farmer lead him to the rumored Inca site of Machu Picchu. He and his companions excavated artifacts, pulled back thick cloud forest vegetation, and encountered a vast city of stone, more extensive than their wildest expectations. Other photography on display will include the fabulous work of Martin Chambi. During the 20th century Indigenism movement in Peru, Chambi was one of the only native Peruvians to participate. He took some stunning photos in 1924 of Machu Picchu. Chambi was also a professional portrait photographer, taking shots of high-society elites as well as indigenous people in the Cusco area. “As an indigenous person, I think his perspectives are different,” mused Dr. Brotherton. She met Chambi’s grandson, Teo Allain Chambi, in Cusco when she last visited. Teo has preserved his grandfather’s archive, down to the glass plates and negatives. Teo will be in Seattle giving a lecture.

Forging a Peruvian Form of Expression 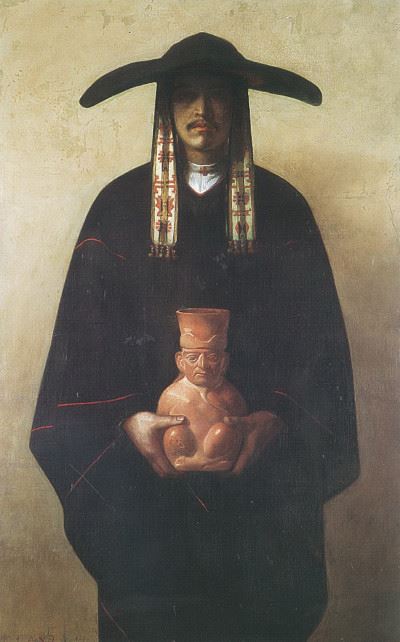 Incense burners in the shape of a turkey or armadillo; a Eurcharistic urn in the shape of a pelican; a votive in the shape of an alpaca; a tray with poppies and chinchillas; a picture of the Last Supper, with guinea pig as the entrée and Francisco Pizarro as Judas – these and hundreds of other objects make up the section of the exhibit known as the Cusco School of Art. “Less well known are the colonial and Indigenism movements,” continued Dr. Brotherton. “And they are just as impressive as the pre-Columbian and Incan artifacts. The Cusco School of Art flourished during the colonial era, alongside the Quito and Lima schools of art. European Catholic artists came to the New World to teach locals how to paint in the European style. And so a unique and fascinating blend of cultures mixed into the oil paintings of the 16th through 19th centuries. “They used European models with indigenous aesthetics,” said Dr. Brotherton. There are hundreds of paintings and other items for use in Catholic rites that employ indigenous folklore symbols and styles along with Catholic models. The Virgin Mary might be venerated highly enough with a traditional European-styled halo, but having her weave with a drop-spindle typical of elite young Andean ladies in Young Woman Spinning sure didn’t hurt, either. “There’s a convergence hereof Peruvian and European practices that are transformed into a new kind of expression.” 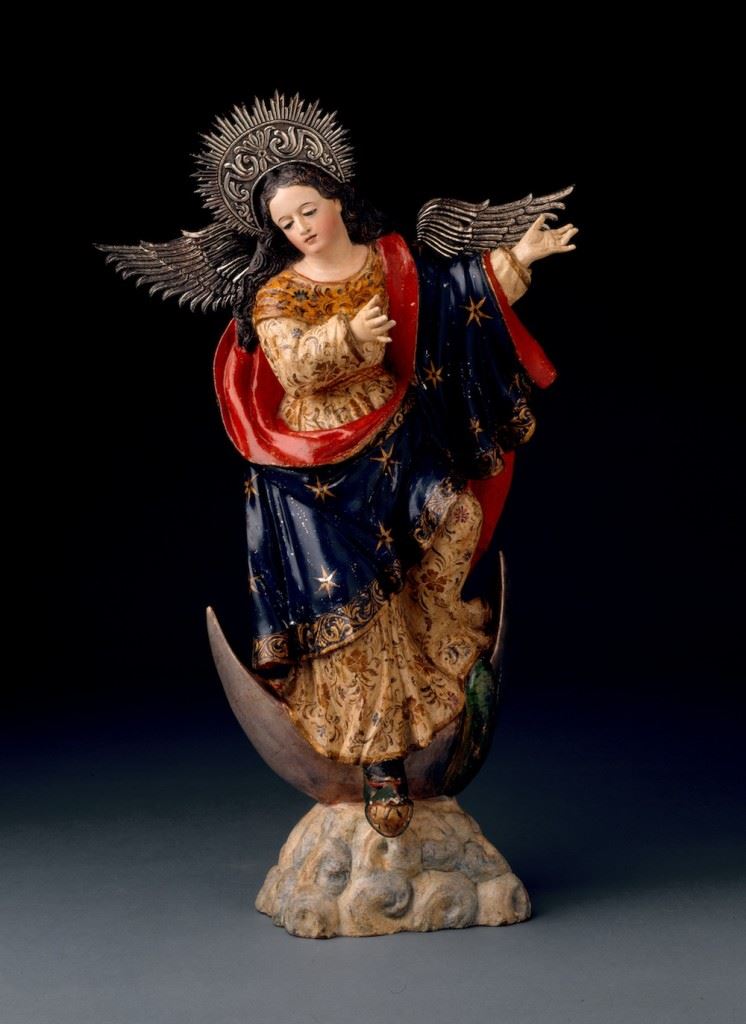 Moving into the post-colonial era, that syncretism bloomed into full freedom of expression with the Indigenism movement. After gaining independence in 1821, Peruvians sought to develop a modern Peruvian identity that was best expressed independent of European forms. “They made steps for a museum of fine arts and a school of art, after decades of European-dominated art. Jose Sabogal, along with a troupe of young artists, literary people, and political theorists asserted the Peruvian identity that was as oppressed during the colonial era,” said Dr. Brotherton. “They took influence from Matisse and Europeans but also pre-Columbian pieces. Peruvians championed folk art just as much as the fine art.” The colorful Inti Raymi festival, which was incorporated into modern Peruvian festivities in the early 1920s, is a good example of indigenous-driven rites supplanting colonial rites. Inti Raymi was an Inca celebration of the solstice, when the Incas would sacrifice to the sun god Inti in hopes of good crops for the coming season. The rite fell out of fashion during the colonial era. But in the 1940s, it was revived as a pageant and now is the most elaborate festival in Cusco, with hundreds of dancers and thousands of spectators watching every June on the solstice as a fake alpaca is slaughtered on the fields of Sacsayhuaman.

A Little of Everything

Dr. Brotherton concluded that the Peru exhibit will appeal to just about everyone. “Hiram Bingham was the prototype for Indiana Jones so there’s that adventurer aspect, for those interested in the Age of Exploration. For historians, this exhibit will be interesting for its clash of cultures. And the show also includes art from the 20th century to the present, including photography from Eduardo Calderon, a Peruvian photographer who resides in Seattle.” There will be a full roster of programs, including audio tours in Spanish to appeal to the 6000 Peruvians in the local area, as well as the Latinos in the region. Read more about the exhibit and plan your visit to the SAM here. SouthAmerica.travel is a tour operator based in the Pioneer Square neighborhood of Seattle, WA. They specialize in Peru tours, including tours to many of the sites mentioned in this article. Photos # 2, 4, 5 courtesy the Seattle Art Museum. Photo #4: Inhabitant of the Peruvian Highlands. Francisco Laso, Peruvian, 1823 – 1869. Pinacoteca Municipal “Ignacio Merino” de la Municipalidad Metropolitana de Lima. Photo #5: Virgin of the Fifth Seal ca.1740 Attributed to Bernardo Legarda, Peruvian, died 1773 Polychromed wood, silver 26 1/2in. (67.3cm) New Orleans Museum of Art.