The Incans are well recognized for their archaeological sites in Peru, especially the extraordinary Machu Picchu. However, while Machu Picchu has stolen the hearts of many, there is a multitude of other sites and cultures of Peru.  The Kuelap fortress, built by the Chachapoyas and Gocta Falls are two spectacular highlights to incorporate on a tour to Peru.  If you’re in the mood to be utterly fascinated by history, check out Kuelap, on our new Peru’s Land of Mystery & Nature Tour, considered today to be one of the largest ancient stone monuments in the New World.

History of Kuelap & the Chachapoyas

The beautiful Kuelap fortress was built by the Chachapoyas natives (Andean natives that lived in the cloud forests of the Amazonas Region of present-day Peru) in the 6th century A.D. However, in the 16th century, the Incas became hungry for land and invaded, conquering the Chachapoyas. Desperate for freedom, the Chachapoyas teamed up with the Spanish colonists to take the region from the Incas. However, the Spanish had some ideas of their own. After the Chachapoyas helped the Spanish invade the Incas, the “Cloud Warriors” found themselves relocated into Spanish-style settlements and towns, forced to change their way of life entirely. As a consequence, the culture of the Chachapoyas has vanished. That is why it is so imperative to visit Kuelap, and its monumental fortress, to understand the heart and life of the Chachapoyas. Read more >> Kuelap Ruins in Northern Peru – The New Machu Picchu

Once a difficult destination to reach, Kuelap is now a comfortable visit for travelers headed to Peru due to the newly implemented cable car. There really is no reason not to add this inspired Kuelap Tour to your bucket list! Read on for the highlights of our new Peru’s Land of Mystery & Nature Tour.

Journey to Chachapoyas (also known as Chachas), and allow for at least two nights in the area. Founded early, during the Spanish conquest, this laid-back painted white town is surrounded by the lush cloud forests. What was once an important area for trade, is now a busy marketplace. Explore the charming local shops and ancient ruins that were left behind. 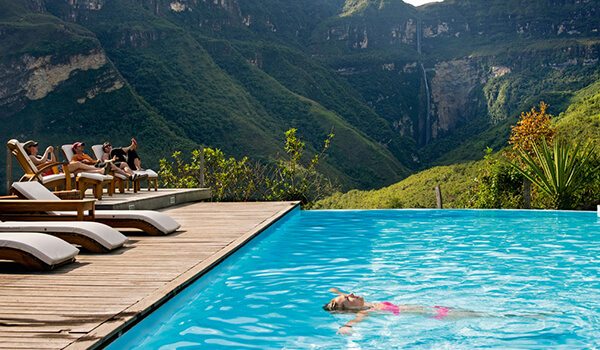 Throughout this tour, spend your nights at the Gocta Andes Lodge. The Gocta Andes Lodge is the perfect place to relax and unwind. Each room has either a balcony or terrace that offers fantastic views of the Gocta Waterfall and lush landscapes. In addition to the views, the lodge is in an ideal starting point for hiking to the falls.

Trek to the incredible Gocta Waterfall. While the Gocta Waterfall can be viewed easily from your window at the Gocta Andes Lodge, that doesn’t mean it isn’t worth the hike. Trek past valleys of orchids, into a green forest teeming with wildlife, and colorful birds flying overhead – a paradise for bird lovers. Admire the cloud forest along the hike before finally arriving at the base of the two-drop waterfall. 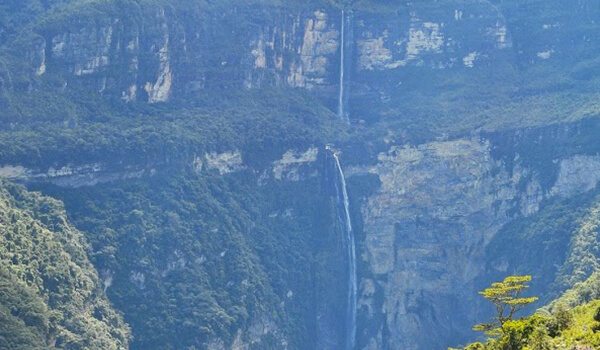 The Gocta Waterfall was discovered in 2000, but it wasn’t until 2006 that the locals decided to measure its height. After measurement, the waterfall earned its title of the third largest free-leaping waterfall in the world (right behind Angel Falls in Venezuela), falling at the height of 771 meters. Due to the extraordinary height, it may be difficult to get a photo of the falls in their entirety. However, there are special vantage points along the main hiking trail, which offer guests excellent photo opportunities. Keep in mind that the journey to the Gocta Waterfall by foot takes about 4-hours round trip. And if that seems a little too long, you can rent a horse to take you ⅔ of the way. Giddy up!

Embark on a quick, 45-minute walk to Karajia. In Karajia, learn about the striking sarcophagi, sculpted to look like humans.  These sculptures have become an icon of the area and mark the resting place of elite Chachapoya warriors. Take in the history of this fascinating site before returning to the city of Chachapoyas. Later, explore Huancas, famous for its pottery made by the local women. Be sure to stop by the lookout across the deep Sonche Canyon. 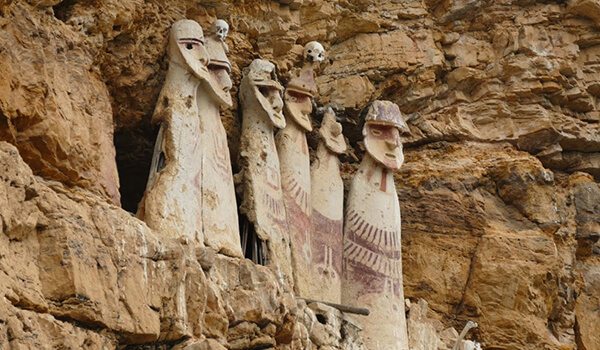 It only takes a short hike to see a close-up view of the colorful cliff tomb in Revash. Dating back to 1200 AD, this photographic site rests atop a yellow cliffside with small tombs encrypted with red pictographs. This is a fantastic place to learn about the culture of the indigenous people that used to inhabit this region. Later, visit the new museum in Leymebamba that houses 219 mummies. Not only are the artifacts confined in the museum worthy of your visit, but also the surrounding gardens nearby. Enjoy the varied native flora that surrounds the museum, including an orchid garden that has over 100 orchid species. 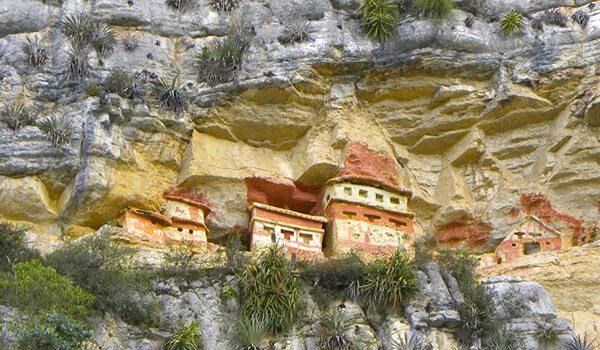 Embark on a scenic cable car ride to the entrance of Kuelap climbing 3,000 meters high. Don’t worry about crowded lines for this tour, because unlike Machu Picchu, the cable car to Kuelap is mostly surrounded by local Peruvians that are checking out the new mode of transportation or the gorgeous flowers blossoming nearby. The trip from Chachapoyas to Kuelap is about 2 hours by car, but every moment traveling is worth the ancient structures that await you. Once you reach the entrance to Kuelap, begin a guided tour and admire the 20 meter high walls and 3 levels of stone structures. This will be a 3-hour excursion if you plan on visiting all sets of ruins and this allows for plenty of time to marvel at the typical round houses built by the Chachapoyas. Shockingly enough, these houses have kept their original structure overcoming any earthquake that tested their stability. 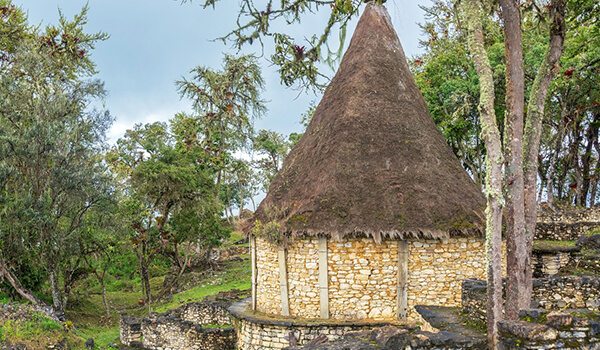 It won’t surprise you to know that Kuelap has applied for UNESCO World Heritage status. While Kuelap remains on the “Tentative Lists” for UNESCO World Heritage status, its universal value, authenticity, and its place under several heritage categories makes Kuelap a strong contender for the World Heritage List. Although some of the circular structures of the site were affected by a fire in 1570 A.D., the alterations made to preserve and consolidate the structures did not add new elements or disrupt the integrity of the site. Therefore, many predict that the historical site will represent UNESCO status in the future. It’s only a matter of time. Read more >> Ruins in Northern Peru – “The New Machu Picchu”

Add Peru’s Land of Mystery & Nature to any Peru Itinerary

Make sure you have enough time to visit one of the most impressive pre-Colombian ruins in all of South America, by planning for at least 4 nights in Kuelap. To make it easy, Peru’s Land of Mystery & Nature is an excellent tour extension. If you’re ready to visit Kuelap, contact us today! Any of our Expert Travel Consultants would be happy to customize a trip to Peru for you and anyone who’s itching to explore Peru’s Land of Mystery & Nature.