The 5 Most Dangerous Roads in South America

The Most Dangerous and Adventurous Roads in South America

South America is an immense continent with many isolated cities and villages spread across snow-capped mountains, tropical rainforests, deserts, and everything in between. Miles of highways are necessary to move people and resources from place to place. The continent’s diverse landscapes have made it difficult to link populations together, and its roads are a sight to behold. From the single lane switchbacks of the Andes Mountains to 9 de Julio in Buenos Aires (the widest avenue in the world), roads in South America come in all shapes and sizes. Below are what some would call the most dangerous roads in South America, but I like to them of them as the most adventurous. 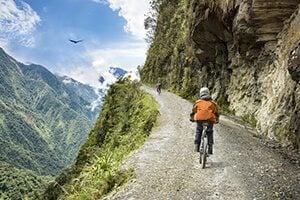 As one of the most famous roads on the planet, the Yungas highway in Bolivia undoubtedly tops the list of most dangerous roads in South America. The highway crosses the Yungas forests and spans 43 miles from La Paz to Coroico. The single-lane road reaches an altitude of nearly 15,000 feet with cliffside drops of almost 3,000 feet. Heavy traffic, poor road conditions, and steep drops earned the moniker of Death Road and the title of “World’s Most Dangerous Road in the World” in 1995. After years of modernization, much of the local traffic has been diverted to a nearby alternative route, making the road considerably safer and open to tourism. Visiting the Death Road is the perfect day excursion from La Paz for the thrill seeker in you. Sign up for a guided biking tour down the Death Road.  Read more >> Explore Bolivia with Travel Consultant Jennifer 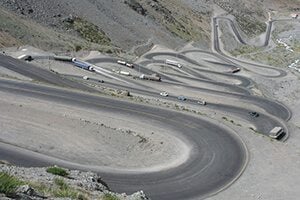 Although Chile and Argentina share more than 5,000 miles of the border, due to the mighty Andes, there are only a few places in which to cross. One of the most nerve-racking, albeit beautiful passes is the Paso de Los Libertadores. This popular pass forms the main connection between Santiago, Chile and Mendoza, Argentina. The Argentine side is much less intimidating with a gradual incline before reaching a tunnel into Chile. The Chilean side has some switchbacks, and sharp hairpin turns. Take this side of the pass extra slowly. If you’re not up for the adventure, there are also quick one hour flights between Mendoza and Santiago. Read more >> Argentina and Chile Tours

#3 Ruta 5 in Chile – Most Dangerous Roads in South America 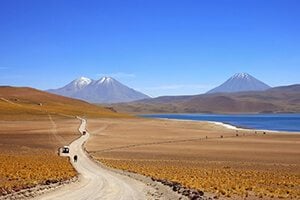 Coming in at #3 for most dangerous roads in South America is Chile’s Route 5; spanning more than half of the country from Arica in the north to Puerto Montt in the south. The dreadful stretch of road traverses the Atacama Desert from Arica to Iquique. Although the Atacama Desert is known as the driest desert in the world, its proximity to the Pacific Ocean causes strong winds and unexpected fog. These weather conditions can create difficult driving conditions. Additionally, Atacama’s barren landscapes seem to stretch forever and can quickly desensitize a driver. The combination of fatigue-inducing backdrops and low visibility makes this one of the most nerving drives on the continent.  However, if given the opportunity, I highly recommend driving along the road, not just for bragging rights, but to enjoy some of the most otherworldly landscapes.  Read more >> The Atacama Desert Tours

The Devil’s Trampoline, or “Adios a mi Vida” as it is known locally, is Colombia’s answer to Bolivia’s Death Road. The road was originally built in the 1930’s to transport troops, never converting to accommodate everyday traffic. It remains a heavily used, single-lane highway to this day. The Devil’s Trampoline begins in the Sibundoy Valley and connects the villages of San Francisco and Mocoa in southwestern Colombia. If you can brave the poor road conditions, blankets of heavy fog, and sharp drop-offs, you will see some of the most beautiful views of the Colombian countryside from 9,000 ft above sea level.   Read more >> Colombia Tours

#5 Route 319 in Brazil – Most Dangerous Roads in South America

Finally, # 5 for most dangerous roads in South America is Brazil’s Route 319. Unlike many of the roads featured in this list, Brazil’s Route 319 is a relatively flat highway cutting through the Amazon Rainforest. The highway stretched some 500 miles and was built to link Porto Velho and Manaus. Manaus is the capital of the state of Amazonas and the main jumping off point for stays in the rainforest. What makes this highway particularly troublesome is the state of the road itself. Poor construction methods and flooding during the rainy season have washed the road away and destroyed wooden bridges, but for our thrill seekers, this is the way to go. Luckily, ferries are an excellent alternative to traveling along the worst road in Brazil. Read more >> Manaus Tours

Have you thought more about winding down one of the most dangerous roads in South America?

Capture your inner adventurer and travel down one of these exciting paths to unforgettable destinations.

Contact us today, and we would be happy to help you get started planning your next South America vacation!