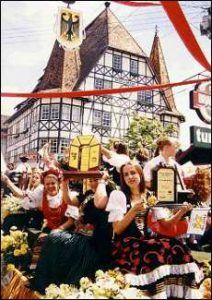 Thought all that Brazilians drank were caipirinha cocktails? Think again. The 28th annual Oktoberfest in Blumenau, Brazil, expects over 600,000 liters of beer to flow this October. Known as the largest beer garden celebration outside of Germany, the Blumenau Oktoberfest is a 2-week-long festival including parades, folk dances, zany games and shows, a Bierwagen, plenty of lederhosen, a “Chopp em Metro” (Beer Drinking Contest), and the crowning event, the designation of the Oktoberfest Queen and Princess. It’s an excellent time to take an Oktoberfest Brazil Tour to see the highlights of Brazil and top it off with a beerstein and bratwurst. Blumenau, just inland and north of Florianopolis in Brazil, was a German settlement begun in 1850 by Hermann Blumenau. Today, a vibrant Germany community continues to thrive in Blumenau, with plenty of tow-headed children speaking Portuguese with German accents. In 1983, the town decided to give homage to the fatherland with a beer-guzzling festival that would rival that of Munich’s. Now an average of 700,000 people come each year to the cerveza-ganza to imbibe and partake in what many would call the most authentic German festival in the Americas. The sounds of samba music are nowhere to be found: only traditional German folklore, with dancers, decked out in lederhosen and dirdl. Many bands fly straight from Munich into Blumenau to perform after the Munich Oktoberfest is over. Other Oktoberfest’s are found throughout South America, including a grand one in the city of Villa General Belgrano, south of Cordoba in Argentina, where Paul Friedrich and George Kappuhn Heintze settled down in the early 1900s to grow hops and wheat for their world-famous fermented drinks. This Fiesta de la Cerveza began in the 1960s, became a national event in 1980, and is now a full-blown fiesta with 11 days of parades, music, dancing, beer tasting, delicious German cuisine and mouth-watering pastries such as Black Forest cakes, and the crowning of the Reina Nacional de la Cerveza, the Oktoberfest Queen. Check out our Oktoberfest, Samba, and Waterfalls Brazil Tour.