Salvador da Bahia in the northeast of Brazil is often left out by tourists, as they usually start in Rio and head either south towards Foz do Iguassu and the world-famous waterfalls, or northwest to the mighty Amazon Rainforest. Salvador is not to be overlooked, however. As the third most populous city in the country with 3.5 million people, Salvador is undoubtedly Brazil’s cultural capital.

The city was originally founded as São Salvador da Bahia de Todos os Santos (Holy Savior of the Bay of All Saints). Not far from this place, the Portuguese sailor Pedro Álvares Cabral discovered a piece of land unknown to the Western world in 1500. To cultivate the fertile soil, Indians who lived there were subjected to work as slaves for Portuguese landlords. As they were not working efficiently enough or suffered from diseases introduced by the Europeans, the rulers searched for alternatives. Eventually, they would find replacements in African colonies such as Angola, Mozambique, and other West African strongholds. The inhabitants of the named regions seemed more resistant and generally had a more vigorous constitution, so the colonialists shipped them to the new territory to replace the Indian agricultural workers. However, before they were brought to the fields, the slaves were traded in the upper city of Salvador, at the square that was therefore called Pelourinho, which means pillory. This well-preserved historical district (pictured above) was named a UNESCO World Heritage Site in 1985. Although they were oppressed, and ethnic groups and families were separated from each other, the Africans succeeded in maintaining parts of their culture. You can relate to this fact quite easily as you explore all around the town. 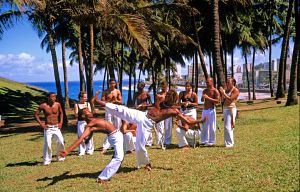 Capoeira is a mixture of African dance and martial arts. It developed as slaves tried to defend themselves against their landlords, but as they couldn’t practice fighting out in the open space of the fields, they figured out how to pretend to be dancing. Thus, when “fighting” against each other nobody contact was allowed and it appeared to simply be a dance. However, when fighting against their oppressors they strapped razor blades under their feet, swinging them around the landlord’s body. You’ll see Capoeira fighters around the main squares, especially on Sundays. If you’re feeling adventurous, get active and try it out yourself! The performers are very friendly and eager to teach visitors about their craft. Capoeira Awarded UNESCO Cultural Heritage Designation in 2014.

Candomblé is a religious orientation that is based on catholic saints. However, when observing it more precisely, its roots lie in Africa. As slaves were oppressed, they were not allowed to practice their religion. But in order to continue practicing their beliefs, they pretended to adapt to catholicism by praying to the Christian saints in front of the colonialists. Instead, they actually worshipped their former African saints, the Orixás. Under the pretext of catholicism, Candomblé survived and is still existent today, especially in Salvador, which has a black population of 80% — the largest in the entire country. Festivities like Lavagem do Bonfim, which arose from the traditional feet washing before the Sunday mass in January, are becoming more popular as tourist attractions too. 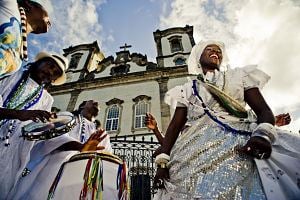 Once in Salvador, you will see Afro-Brazilian women in opulent, colorful dresses with turbans and fitting make-up, the baianas. If you take a picture with them, they might charge you money, be aware of that or just ask them politely if you are allowed to. A better option to capture the perfect Salvador ‘selfie’ is to buy food at the stands around the main squares. Usually, they will offer Acarajé, which is a kind of bread stuffed with veggie sauces and dips plus shrimp, you shouldn’t miss that! I can definitely recommend Acarajé da Mary at Praça da Sé. As a dessert, go and get a passion fruit coconut cream or sweet tapioca. As the slaves spoke various different languages and dialects at the time they arrived, they were forced to speak Portuguese. Nevertheless, some words were taken over to Portuguese and are even listed in dictionaries.

Carnival – the other one

Unfortunately, I myself have not been to the Brazilian carnival yet, but Salvador’s version is both similar and unique in comparison to the huge show in Rio — more traditional and not as touristy. The festivities themselves were introduced by the Portuguese settlers during colonization and evolved from an upper-class event to one celebrated by rich and poor. It was the poor who took the party to the streets, which still is an important part of the festival today. A huge parade takes place and if you want to be part of a bloco, buy an obligatory shirt that tells to which of them you belong to, an abadá, well in advance. African percussion groups as well as dancers are an essential part of the parades. Book It! — A Tour of the Amazon and Salvador 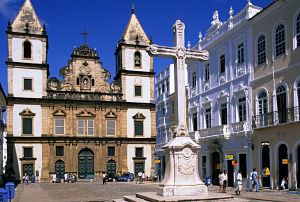 Cobblestoned streets and old houses around Pelourinho still remind people of the Portuguese colonization. The Terreiro de Jesus, the historic square officially titled Praça 15 de Novembro, offers various churches. One of the rare baroque-style buildings in Brazil, the Igreja da Ordém Terceira de São Francisco plus the golden Church and Convent de São Francisco, are both worth visiting. Every Tuesday masses are held throughout the town. Go to Pelourinho’s Igreja Nossa Senhora Rosário dos Pretos with the colorful ribbons tied on the fence railing (make sure you get a bunch of those and you have various souvenirs! Make three knots and a wish and wait until it falls off your wrist and your wish may come true).

Considering a trip to Brazil? Be sure to look at our Salvador da Bahia tours. 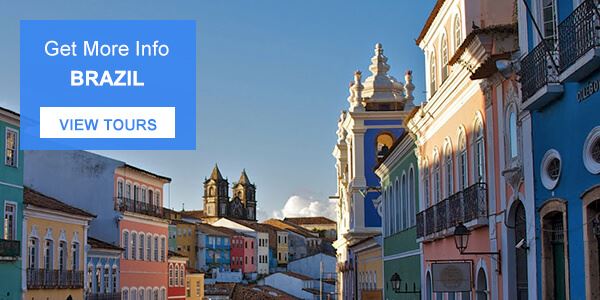