With a Buenos Aires Vacation Package, witness one of the fascinating cities of South America 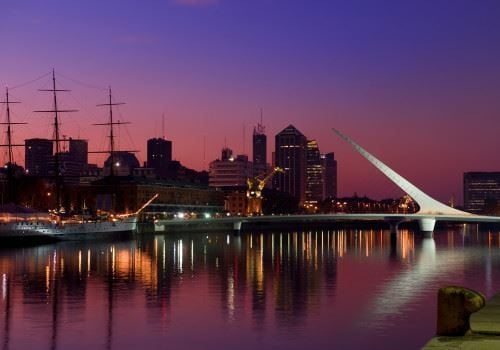 Buenos Aires is one of the most fascinating cities in South America. Known as the Paris of South America, the capital of Argentina has a mix of Latin American and European art, architecture, and culture. Known for its welcoming people, great food and wine, and lively nightlife, this sprawling metropolis is worth a visit on any Argentina tour. But read on to learn about the distinct neighborhoods of Buenos Aires and which neighborhoods you should be sure to visit on your next Buenos Aires vacation package. As a Buenos Aires native myself, I recommend the following barrios that you can’t miss on your next visit to Buenos Aires:

San Telmo neighborhood is a bohemian quarter, the birthplace of Tango in Argentina, and a source of inspiration for many artists. Today is one of the most visited places in the city, especially by Tango lovers for its many “milongas” (Tango dancing salons), and Tango shows. On Sundays, the famous “Feria de Antiguedades” – Antiques Fair – in Plaza Dorrego, is a must see on any Buenos Aires vacation package.

Recoleta is the most traditional and upscale neighborhood in Buenos Aires. It is the part of the city where the French architecture of its buildings and mansions is more notable. Many of Buenos Aires’s main tourist attractions can be found here, like the Recoleta Cemetery (burial site of Evita Peron), the National Museum of Art, the artisan’s fair in Plaza Francia and the colonial church of Iglesia del Pilar, amongst others.

This neighborhood is the largest one in the city, and is one of the most popular ones for young people since here you can find the liveliest bars, restaurants, nightclubs and the “trendiest” shops and coffee bars to go out to at any time. Also, in Palermo, you can find the Zoo, the Botanical gardens, the biggest park within the city, the “Lagos de Palermo” Park and the Polo Field.

This small neighborhood located in the south of the city is one of the most visited places. Caminito passage, with its colorful houses and the Boca Juniors Stadium, are both icons of the La Boca neighborhood and the city of Buenos Aires. As well as being a great place for taking photographs and buying souvenirs, it holds some of Buenos Aires´s best museums and art galleries, such as the Quinquela Martin Museum and the Proa Art Gallery. This barrios is also a must-see during your Buenos Aires vacation package.

Considered to be the “centro” or central part of the city, Plaza de Mayo also holds the country´s main political, cultural and religious buildings: the “Casa Rosada,” the national government´s palace and famous by the play/film “Evita” (here is where from Evita sung the famous song “Don’t Cry for Me, Argentina”); the National Cathedral and the “Cabildo” – a former political building one of the oldest buildings in the city.

The best way to cover all of the above places, and get some local insight into the history and significance of the Buenos Aires’s many secrets, is to include one of our private city tours in Buenos Aires. All our Buenos Aires vacation packages are small group tours with English-speaking guides (many other languages available). Our Buenos Aires tours are available year-round.

Clara was born and raised in Buenos Aires, Argentina, the city she loves and wishes everybody could visit! She graduated with a degree in Tourism Administration in Argentina before moving to England to work on her English and continue her education with a Postgraduate course at the University of Birmingham. After traveling around Europe and getting used to fish and chips for lunch instead of the traditional Argentinean asado, she came back to her home country in 2008 and started working in the Tourism industry, as a travel consultant for SouthAmerica.travel. Being a travel enthusiast, she can't stop touring her home continent, from the breathtaking Galapagos Islands, to the powerful Iguazu Falls, and her favorite, the Argentinean and Chilean Patagonia.