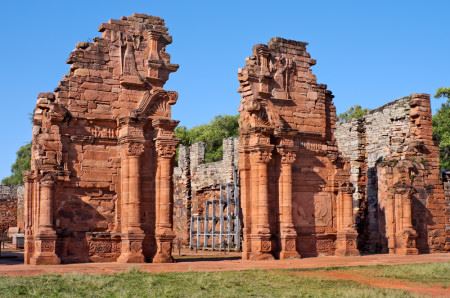 Several Jesuit Missions in Brazil, Argentina, and Paraguay have been decaying at the hands of a tropical jungle since the 18th century. Though the work of entropy and centuries of neglect have left these stone churches and towns in ruins, the former grandeur of the Jesuit Missions remains visible in the baroque architectural details mixed with indigenous bas-relief of animals, fruit, flowers, and saints. If you are planning Iguassu Falls Tours in Brazil or Argentina, make sure to carve out a day to visit at least some of these impressive Jesuit Missions. 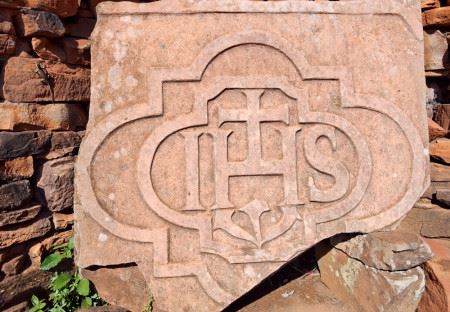 The History of the Jesuit Missions in South America  The history of the Jesuit Missions in South America is as colorful as the reddish-brown sandstone of the missions themselves. In the 17th century, missionaries from the Society of Jesus, also known as the Jesuit Order of the Catholic Church, set out to evangelize the Guaraní people who lived in the Rio de la Plata Basin, near the conjunction of Paraguay, Argentina, and Brazil — where the mighty Iguassu Falls flows along the Iguazu River. As an alternative to the slavery institutionalized in the colonial encomienda system, thousands of Guaraní came to the Jesuit missions to live safely under their jurisdiction. Throughout the 17th and 18th centuries, the missions system in the region flourished, and dozens of missions were built. Many Guaraní learned the trade of stone masonry, sculpture, subsistence farming, textile-making as well as Christian doctrine. Life at the missions, or reducciones, was communal, with all Guaraní living close to the main square, church, and homes of the Jesuits. Inquire Today About Iguassu Falls Tours Brazil Plus the Jesuit Missions! Our travel consultants would love to help you arrange a tour of the Iguassu Falls plus the Jesuit Missions. We can customize a half-day, full-day, or multi-day trip to these locations. Our tour packages include professional guides, tours, transfers, hotels, even flights! Contact us for more info about available Iguassu Falls tours & Jesuit Missions tours.