Top 5 Places to Visit in Bolivia 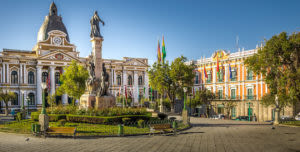 Why Visit La Paz?
Located in the dramatic Altiplano region of the Andes, La Paz is known as the highest capital in the world. At an elevation of approximately 12,000 feet, there are endless opportunities for hiking and exploring the natural and diverse beauty of the Andes. Popular trails include the lush Palca Canyon and red rock views of the Valle de la Luna regions. Additionally, founded in 1548 as a Spanish colony, La Paz has many impressive colonial buildings and monuments, including the Church of San Francisco and the Basilica of Our Lady of Peace.

La Paz is also a great starting point for exploring other sites such as Tiwanaku. Tiwanaku is an important pre-Columbian archaeological site located just 70 km from La Paz. This civilization is considered the most important precursors of the Inca empire.

Also near La Paz is the city of El Alto, the Cholitas Wrestling event is a thrilling scene. Cholitas are the indigenous women of the area, recognizable by their traditional bowler hat, large shawls, and full skirts. Though heavily clothed, the women wrestle clad in their traditional garb, removing their cloaks. The result is an artful display of choreographed, professional wrestling with beautifully crafted skirts.

For the adventurers out there, embark on the Death Road biking tour from La Paz. This is an incredible 40-mile bike ride (almost all downhill) with dramatic cliff-sides and viewpoints along the way. As you can see, there are plenty of things to do in La Paz.

Best Time to Visit La Paz
In La Paz, the summer is short, mild, and overcast (December to March); the winter is very cold and dry (July to September). Throughout the year, the temperature generally ranges from -2 ° C to 15 ° C. Overall, La Paz can be visited year-round, however the best times of the year to visit La Paz are from late April to late May and from mid-August to late November.

How to Get to La Paz
La Paz is one of the gateways to Bolivia, and it is greatly visited in combination with other countries, particularly Peru and Chile. The main routes into La Paz are via Lima, Cuzco, Puno, and Santiago (or via Santa Cruz), usually with Latam Airlines, and this is likely to be many travelers’ best option. Other routes include Copa from Panama City through Santa Cruz (with connections to many North American cities) and Santa Cruz to Sao Paulo flights with Latam, Gol, and Boliviana. 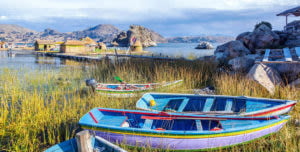 Why Visit Lake Titicaca
Lake Titicaca, located on the border between Peru and Bolivia, is the world’s highest navigable lake. Beyond its impressive natural beauty, the area is distinguished for its intriguing history, considered the birthplace of the Inca empire. Today, the lake is dotted with the empire’s indigenous descendants from Peru and Bolivia.

Perhaps most unique, however, are the indigenous reed islands. Created years ago as a means of protection, the indigenous tribes created entire villages on floating reed islands, allowing ease of access to traverse the lake. The Catamaran cruise offers a fantastic opportunity to travel between La Paz and Puno, Peru – offering a chance to go throughout the lake and view these islands up close.

For those who prefer the land, Copacabana, on the shores of Lake Titicaca, is one of the most beautiful towns in Bolivia. Featuring expansive viewpoints, historic ruins, and the region’s quintessential reed homes, travelers can still enjoy all the pleasures of the world’s highest lake. While in Copacabana, a visit to Horca del Inca is a must. Perched on the hills above Copacabana, the site offers not only views over the lake but also an impressive collection of historic ruins and artifacts from pre-Inca civilizations. Other popular destinations include the scenic islands of Isla de la Luna, Isla del Sol, and Isla del Sapo. These destinations can easily be visited from Copacabana.

How to Get to Lake Titicaca
Lake Titicaca is best explored from Puno, the lake’s largest city. Visitors can fly into Inca Manco Cápac International Airport of Juliaca, located 30 miles from Puno. 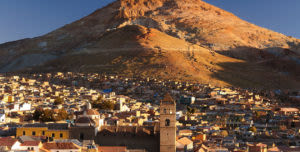 Why Visit Potosi
Located in Southern Bolivia, Potosi is a quaint town and is an ideal destination to experience Bolivian culture and history. Since its origins as a major supplier of silver to the Spanish Empire, Potosi has continued to operate its historic mines. In fact, machinery and new mining technology have not yet reached Bolivian miners, offering visitors a preserved glimpse into the past. A tour of one of these mines is a must, where visitors can meet with miners and give their respects to El Tio (the devil of the mine). For the full experience of a true Bolivian miner, sample the local 192 proof alcohol – the miner’s drink of choice, and don’t be surprised if they offer you sticks of dynamite! This is truly a unique and once in a lifetime experience.

For city sightseeing, the historic center of Potosí is a striking example of Spanish colonial architecture. With impressive Baroque monuments like the Iglesia de San Lorenzo de Carangas and Torre de la Compañía de Jesús, lovers of architecture will enjoy the ornate details of the Empire’s past. Furthermore, deeply rooted in tradition, the local population has held tight to its 19th century past, seemingly pausing time. Locals have even upheld the indigenous garb of the 1800s, dressing in colorful pleated skirts, bowler hats, and intricate shawls – all hand-made. While strolling through the city, be sure to observe the local people, appreciating their unique style, lively indigenous markets, and quaint streets.

Best Time to Visit Potosi
The best time to visit Potosi is from May to August, as this is the dry season. At this time, the conditions are optimal for traveling around the country and hiking, when roads and trails are not flooded. The highest chance of rain is from December to March, during the wet season. July is the coldest month. The average temperatures are 15 ° C a -4 ° C and can be especially cold at night.

How to Get to Potosi
Potosi can be reached by plane or by bus. From La Paz, located 538 km away, Santa Cruz de La Sierra located 640 km, and Uyuni located 205 km. 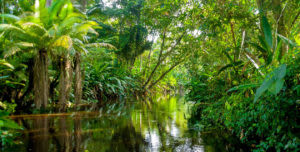 Why Visit Noel Kempff Park
Situated outside of Santa Cruz, Noel Kempff Park is one of the best destinations to witness South America’s diverse wildlife. Registered as a UNESCO World Heritage site, the park is well maintained, allowing its wildlife inhabitants to thrive uninterrupted. Home to over 2700 plant species, 600 birds, and 130 mammals, there are endless opportunities for wildlife viewing. Some of the more famous inhabitants include giant river otters, pink river dolphins, pumas, and jaguars.

The stunning setting is renowned for its dramatic waterfalls, steep plateaus, and vibrant lagoons, with plenty of fantastic hiking trails and swimming spots. The park is not the most accessible destination to get to. It requires a good dose of healthy adventure and time; however, the natural beauty of the region is more than worth a visit during any Bolivia tour.

How to Get to Noel Kempff Park
Visitors can access Noel Kempff National Park by land or air. Most people choose to fly (small planes) not only for convenience but for the fantastic views over the jungle and waterfalls. The average travel time from Santa Cruz is around 2.5 hours. By Land Please note that roads are only accessible during the dry season using a 4WD. 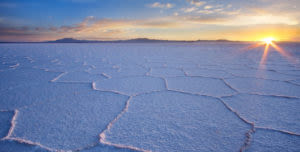 Why Visit Uyuni Salt Flats
Last but most certainly not least – and among our Travel Consultant’s favorite places to visit in Bolivia – is the Uyuni Salt flats. Starting in Uyuni, a tour of the famed salt flats takes you through some of the most beautiful, remote landscapes in the Altiplano region.

Visit the train graveyard and old salt factories, before finally glimpsing the expansive salt flats. Located in the Altiplano region, Salar de Uyuni is the world’s largest salt flat, encompassing 4,050 square miles. Travelers can look out miles over the flat, and in the evening, watch the star-studded sky transform the land into shades of blue. During the dry season, tourists can enjoy Uyuni with sunny, warm, dry days. In the wet season, travelers can also enjoy Uyuni for the mirrored reflection of the sky that happens when the salt flats become glossed over with raindrops. The sunsets at this time are simply unbeatable.

Take a walk on the banks of the red lagoon and spend a night in a hotel made entirely from salt! Concluding the tour, you’ll return to Uyuni with some of the most spectacular photos to share with your friends and family. Read more about customizable Uyuni Tours in Bolivia. After your Bolivia tour, I recommend continuing your trip to San Pedro de Atacama, Chile, the driest desert in the world.

Best Time to Visit the Uyuni Salt Flats
Uyuni can be visited year-round. From May to October is the dry season when the surface hardens and hexagonal shapes are formed. In the summer (wet season, from November to February), it becomes a gigantic mirror.

How to Get to the Uyuni Salt Flats
There are flights to Uyuni from La Paz, Sucre, and Santa Cruz. If you are coming from Sucre or Potosí, there are also buses during the day, and you can enjoy the beautiful landscape on the way.

More from our Blog
Bolivia Tours