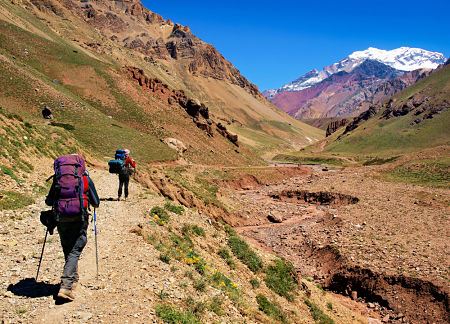 Ready? Let’s Explore what mountains are in South America!

Editor’s Note: Travel Consultant Adam joins us to take a look at the top five climbs in South America. Adam is an experienced mountaineer who has climbed extensively in South America and throughout much of the rest of the world. This past June, he summited Mount Rainier in Washington State, a height of 14,409 feet.

First up on the list of What mountains are in South America is Cotopaxi. Once worshiped by ancient civilizations as the bringer of rain and prosperous crops to the ancient Ecuadorian civilizations, Cotopaxi sits at 19,347 feet above sea level and is among the highest active volcanoes in the world. First summited in the early 1800s, climbers flock by the hundreds each weekend to climb this fabled peak. A member of the Pacific Ring of Fire, this volcano is still classified as active – though no eruptions have occurred since the 1940s.

HOW TO CLIMB COTOPAXI: Visible from the Quito skyline, Cotopaxi national park can be reached by jeep in around an hour. From there, a short drive to the parking lot allows climbers to begin their ascent to the Jose Ribas Refuge, an hour’s hike away, before overnighting at 16,000 feet. Beginning around midnight, the climb to the summit takes about 56 hours and requires the use of crampons, ice ax, and knowledge of how to use crevasse rescue gear. From the refuge, climbers take the Rompe Corazones route (Heart Breaker) right of the refuge for two-three hours up steep terrain before navigating a large crevasse at 18,000 feet. After navigating around the crevasse, the Rompe Corazones rejoins the old route and continues to the summit of the expansive crater at 19,347 feet. As of 2012, all trips to summit Cotopaxi must be guided, so climbers of any level can receive the guidance and skills they need to climb Cotopaxi! For beginners: suggest 3day/2night for ample practice with equipment and additional days to acclimate in Quito/surrounding areas.

WHEN TO CLIMB COTOPAXI: Climbs can be made year-round, although December/January offer ideal dry conditions with the least severe winds. 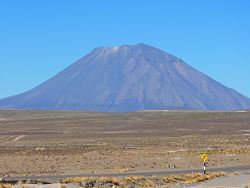 Ask a person of any age or background to draw a mountain and El Misti is what they will draw. Towering over the town of Arequipa, at 19,101 feet, the symmetrical volcano El Misti is one of the highest active volcanoes in Peru, and with its recent history of small eruptions, one of the most dangerous! The last eruption hasn’t occurred since 1985, however, and given its location and climate the mountain doesn’t have much snow, making it a terrific summit for beginners and experts alike!

HOW TO CLIMB EL MISTI:  From Arequipa, a private transfer by 4×4 takes about an hour to get to the start of the climb. Taking the Grau route, hikers spend the next 4-6 hours hiking up to 15,120 feet on steep scree to Campo Pirámides Alto. After camping overnight, the summit is a short 5 hours away and offers phenomenal panoramic views at the summit of 19,101 feet. Though there is snow at the top of El Misti, crampons, ice axes, and glacier travel gear are generally not needed unless there has been a recent snowstorm, and the majority of the climb is done on volcanic rock and scree. For climbers in excellent shape, the climb can be done in 2 days/1 night, however ample acclimatization is needed, and 3 days/2 nights is recommended for a more comfortable ascent.

WHEN TO CLIMB EL MISTI: June to October offers the best window for weather, however, this area of Peru is notoriously dry and climbs can be attempted year-round.

HOW TO CLIMB HUAYNA POTOSI: From La Paz, a short 2-hour drive takes you to the parking lot and base camp at Zongo Pass (15,400 feet). Depending on acclimatization and fitness levels, from here the climb is a two-night ascent, with the first night spent at Refugio Huayna Potosi. The next day, a straightforward 1-3 hour hike leads to high camp at Campo Argentina (17,060 feet) for an overnight stay. The following day at around 2-3 a.m., climbers make an attempt for the summit, which takes anywhere from 4-8 hours depending on fitness levels. At the summit, enjoy magnificent views and panoramic shots of the Altiplano, Lake Titicaca, and La Paz. Though the standard route requires crampons, ice axes, and the knowledge of how to use crevasse rescue equipment it is generally considered a basic climb suitable for climbers in excellent physical condition and some background knowledge of glacier travel. Other portions of the mountain range in difficulty, from beginner to expert, so opportunities abound on this classic climb!

WHEN TO CLIMB HUAYNA POTOSI: May-September is the climbing season, however, June-August offers the best weather. This is winter in Bolivia, so it is certainly cold, however, this time of year offers consistently dry weather, ideal for this climb.

Ojos de Salado is one of the most disputed climbs in South America, as well as one of the tallest mountains in South America. The highest active volcano in the world, the true elevation of the summit of Ojos has never been fully agreed upon – and its status among South American peaks has bounced from second to first to third and back to second in the past years. Most agree that Aconcagua takes the cake as the continent’s highest peak, but Ojos de Salado comes in a very close second with a summit estimated at 22,615 feet. To add to the controversy, the summit is divided into a saddle with two peaks – one peak on each side of the border between Chile and Argentina. Which is the highest? Depends on who you ask, but most agree that the Chilean summit is about 3 feet higher than the Argentine summit, but be careful who you say that to!

HOW TO CLIMB OJOS DE SALADO: Divided by the border, Ojos de Salado offers many different routes for the would-be climber depending on preference. On the Chilean side, begin in Copiapó and travel to Laguna Verde, the base of the mountain. Work up the mountain navigating between refugios along the way, with overnights in Refugio Atacama and Refugio Tejos before approaching the summit. Though the Chilean summit is rumored to be higher, the ascent is certainly made easier with lodges along the way and a more established base. From the Argentine side, begin in Fiambalá and work your way to Cazadero Grande River Canyon in Quemadito for an overnight in a refugio. After this, begin the long trek toward the base of the climb at Agua Calientes (not to be mistaken for the city near Cuzco!) or Agua Vicunas. From Agua Vicunas, the trek begins its steep ascent toward to Portezuelo Negro stopping in the camp near El Arenal. From there, the summit is within sight and offers a straightforward path. Crampons, ice ax, and clothing to protect from high winds and cold temperatures are all required, and an optional rope for the last bit of summit creates a safer option. Alternatively, rent a 4×4 and make your way as high as you can! The current record for highest altitude in a land vehicle has been set here (reaching all but 900 feet short of the summit!) as well as the highest motorcycle elevation (reaching heights over 20,000 feet above sea level).

WHEN TO CLIMB OJOS DE SALADO: Being in the arid region of Northern Chile and Argentina, the desert climate offers dry but windy weather year-round, however December to March is the most popular climb season as it offers the warmest temperatures. The climb is very, very windy, so protection is a must!

Aconcagua is the highest peak in South America and the highest peak in the world outside of Asia. Aconcagua, a member of the Seven Summits boasts an impressive 22,841 feet above sea level (6,962m) northwest of Mendoza, Argentina. Thousands of people flock to this mountain annually to attempt the climb, and on average only 60% summit successfully.  Despite being designated as a non-technical climb, Aconcagua is far from easy – though the recent summit by a 9-year old boy and the summit of an 87-year old man may be a bit misleading – and often takes upwards of 3 weeks to successfully climb.  Outside of the Himalayas, though, there isn’t a peak more worthy of climbing.

HOW TO CLIMB ACONCAGUA: Climbing Aconcagua, the highest peak in South America, requires rigorous training and acclimatization, but those willing to brave the daunting task are certain to bag the peak of a lifetime. Via the normal route, Aconcagua can be climbed as a hiking summit – the use of crampons and ice-ax can be helpful, but are not mandatory to the summit. Starting near Confluencia, climbers make their two-day approach to base camp (often with mules transporting gear), where acclimatization trips begin and the long-haul preparation begins. Following the northern ridge, the climb gains altitude steadily and depending on physical endurance levels, can take anywhere from 5 hours (the fastest summit!) to 3 weeks. Those up for a bit more of a challenge can take the Polish route, which follows a glacier up to the mountain and requires more technical equipment and knowledge. Similarly, the southern faces offer routes of varying difficulties, though most of these are exceptionally harder.

WHEN TO CLIMB ACONCAGUA: December to February is the prime climbing season, through January and February offer warmer weather (and therefore, more people). As with all peaks of such altitude, weather can change on a dime and therefore no window of time can be predicted ahead of time, so best to plan on extra days! Remember, Aconcagua is the highest peak in South America!

Are you ready to book a South American adventure? Complete the below form to contact Adam directly and begin planning your customized itinerary today!