Part 4: The City of Medellin, Post-Pablo

Medellin (pronounced may-day-jean by the locals) was long known as the murder capital of the world. Located in the Andes and built in a valley with steep hillside slums the name Medellin comes with preset expectations. Made famous by the infamous drug lord Pablo Escobar (my son even had a pet scorpion named after him) depicted in Narcos, and even Entourage, Vince Chase’s fictional blockbuster bomb titled Medellin. All portrayed a city of crime and brutality. Though I have to say, there is definitely a new spirit of hope in this city. 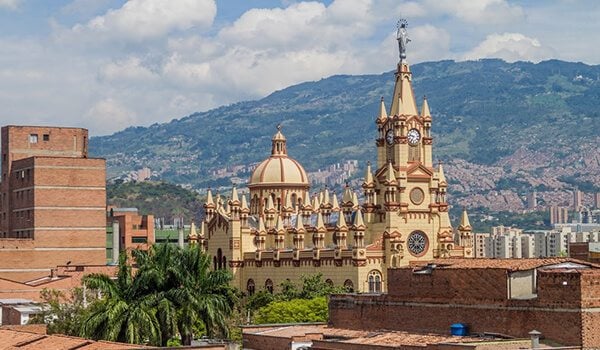 We were picked up by our tour guide, Santiago, who drove us to the Art Hotel Boutique which I envisioned with Van Gogh gallery sunflower walls and impressionistic splashes of color. However, their idea of art was a bit more modern, specifically industrial chic – a contemporary gray look with mostly brick, mortar, cement, concrete floors and bars (not the drinking kind), think prison. Not exactly our style. But we did enjoy the rooftop restaurant which gave us a panoramic view of the city and the cosmopolitan neighborhood. That night we ventured out and made it about one block when the skies unleashed torrents, buckets, wheelbarrows of rain, punctuated by thunder and lightning. Paralyzed at first, our umbrellas were crushed under the weight of the water; we splashed our way into a funky Cuban restaurant close by for dinner. Read more: The 5 Best Things to See in Medellin

The next morning Santiago and our driver picked us up and our first stop was Distrito Trece (District 13) which sits on a steep hillside. It was once the city’s bloodiest epicenter.  An innovative mayor, Sergio Fajardo connected District 13’s rival gang neighborhoods with escalators. There are over 28 stories of them. He poured money into education, arts and libraries. We saw colorful murals of hope lining the walls and youngsters taking martial art classes while we were there. One woman told us about how men, whose mothers thought they had been killed in the war, returned home rejoicing with a communal Christmas dinner. 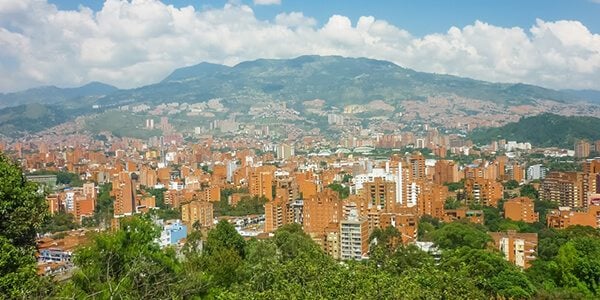 I like Raphael’s description, “Seeing District 13 where Pablo Escobar was killed where there had been so many deaths was particularly moving. The State and the community have been working to increase communications between the old factions in the neighborhoods by building walking bridges in between them and including an extensive escalator system, allowing easier access to the city for the poorest of the poor. They have also increased community activities like special free classes including; karate, other sports, supervised trips for kids and families into the city, easier access to schools and public services. One thing I liked was that they invited local and other famous artists to work on murals throughout the community that recognize the previous history of pain and alienation and yet express the new hope and reconciliation with the State and community at large, really very good work.”

Another hillside neighborhood where no one dared to enter not even the police was Santa Domingo. Santo Domingo is now connected with cable cars which we traveled on. Santiago informally interviewed our fellow cable car riders. One a young woman, almost giddy with joy, commented on the transformation. She literally was bubbling with happiness. The other older woman more serious echoed the younger woman’s positive attitude. An older couple got on and talked about how they had never left their Santa Domingo neighborhood until the cable cars were constructed. Connecting the barrios (neighborhoods) has resulted in very much needed human connection. 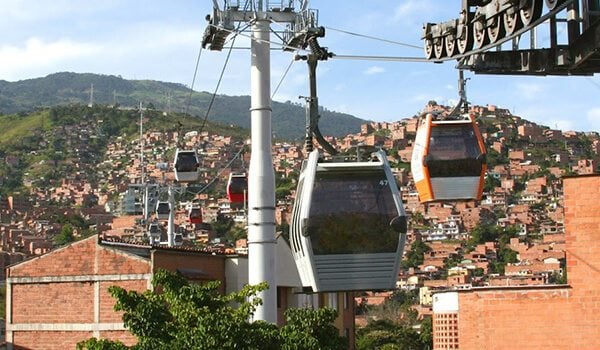 We spent some time exploring the other forms of transportation – trolleys, trains and trams. Throughout the city tour, Santiago often stopped to buy us a new fruit to try. One was a called guama. It looks like a giant elongated stiff green bean. When opened there are seeds the size of walnuts covered with soft white fluff. That is the part you are supposed to eat, a less intense cotton candy flavor. I misunderstood and ate the whole seed. It tasted like coconut to me. When I saw Raphael discarding his seeds, I asked Santiago about it. When he found out I had eaten the entire seed, he blanched and asked several vendors if I would be safe. They shrugged and said, “The animals eat them.” Good enough for animals, good enough for me. View more: Colombia Tours 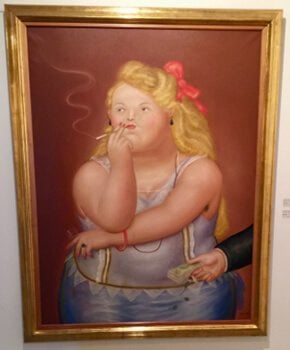 Santiago left us at the Botero’s Plaza of Sculptures in the center of downtown. Fernando Botero is a famous Colombian artist who I thought was European because I saw so many of his paintings in Italy. His signature style is exaggerated, voluminous, “fat” people which seem like it would get tiresome, but because his pictures are based on interesting aspects of society, it doesn’t. At the same plaza is Museo de Antioquia or as many call it Botero’s Museum since his works dominate this museum. Often provocative, a lot of his paintings revolve around the seedy underbelly of life. Still living, Botero resides most of the year in Europe but travels to Colombia for one month a year. Born in Medellin, he depicted the drug-fueled violence of his city during Escobar’s reign. One of his most famous paintings is “The Death of Pablo.” It’s somehow fitting that this Medellin artist captures the oversized, larger than life Pablo is seen here dominating this rooftop, his power at last extinguished. We were eating lunch at the museum’s cafe when Raphael noticed a disturbance outside in the plaza. A female vendor with a stick or a bat was chasing a man, perhaps a thief. Crowds were gathering, and within five minutes several policemen had arrived. Within two minutes the police had peacefully resolved the conflict without escalating the danger. Raphael went outside to praise their handling of what could have been a small riot. He said the policeman replied that “We are trained to first place ourselves in the shoes of the people.” An interesting concept. Read more: Top 5 Best Street Art City Tours in South America

Santiago picked us up the next morning for a drive to the countryside. Along the way, we stopped at a mirador or lookout to see the spectacular geography of this magnificent valley with red-necked vultures swooping by. One of our first stops was to La Piedra de Guatape or Rock of Guatape. Almost ludicrous, a gigantic rock sticks out like the proverbial sore thumb. Zigzagging up, the 700 plus steps lead to the top where there was a small restaurant and folk art store. We saw one man whose job was to lug plastic water bottles and other supplies up to the restaurant which he said he did 20 times a day. 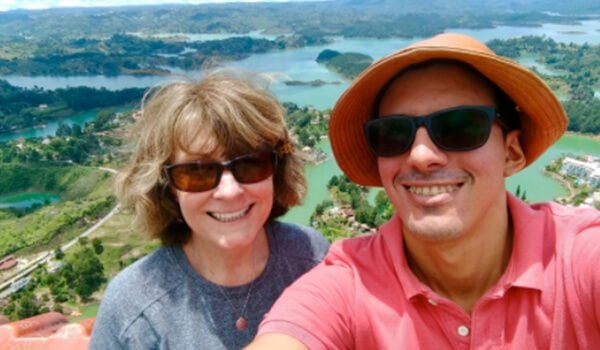 Raphael opted to watch me and Santiago climb to the top of the massive rock. Gasping at the altitude and the views of green turquoise rivers and waterways below, I loved this Doctor Zeus monstrosity of a rock. I was able to fully appreciate the aqua green waters when we went for a boat ride through the curlicued waterways with summer estates lining the shores including a burned out shell of a mansion that once belonged to Pablo Escobar complete with a tunnel that popped out a few acres away for getaways. Wow! Such a peaceful setting with such a disturbing history. We lunched at a local Hindu restaurant that also served typical Colombian dishes. We ordered Bandeja Paisa which had red beans, pork, rice, ground meat, chicharron, fried egg, chorizo, arepa, avocado and plantain. Did I mention that the traditional Colombian dishes contain everything but the kitchen sink? A quick exploration of Guatape, this is an alarmingly colorful town with crafty, artistic side panels called zocalos lining the buildings.  Back to the Art Hotel and our last evening in Medellin. On our way out, we stopped at the lookout and saw the glorious view one more time – photo taken by Santiago. Leaving Medellin, I reflected on the sheer exuberance of the new found optimism of the people of this city. It’s as if the mayor had run on a platform of “Make Medellin great again” and really created dynamic changes for all. Imagine!

Follow along on this multi-part series. Next stop is Cartagena and Santa Marta.

Be sure to visit Penelope’s Odyssey’s where Penelope share’s even more stories from her adventures!