A Trip to Ilha Grande, Brazil

“If beach-going in Brazil is a religion, then visiting Ilha Grande is like praying in the Vatican.” 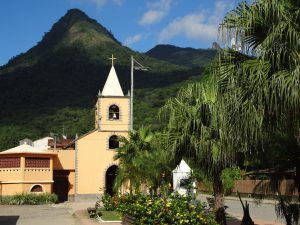 My journey began with: a 4-hour flight from Seattle to Dallas; a 2-hour layover in Dallas; a 10+hour flight from Dallas to Rio de Janeiro. Then: 1-hour wait at the airport, a 3-hour drive to Angra dos Reis; 3-hour wait at the ferry terminal;  a 45-minute catamaran trip; and finally a 15-minute walk before I found myself at the “Pousada Ciacara” in Ilha Grande Brazil. Jet lag became a whole new animal, but jet lag in this idyllic spot makes it all worthwhile. In retrospect, I would do it exactly the same way on my next trip to Rio.  Visiting Ihla Grande as an entry point into my Brazilian adventure was like eating dessert first.

Ilha Grande is a state park, a pristine part of the Atlantic rainforest, and an island that has one of the most diverse ecosystems on the planet.  A little larger than Aruba with no motorized vehicles, the island has 22 coves and beaches interconnected by hiking trails, some only accessible by boat. 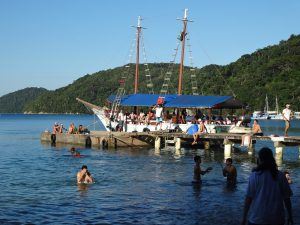 Abraão is the only “town” you can see on an Ilha Grande tour. The streets are made of sand, and every night I made a pilgrimage to the “Rua de Praia “ (beach street) for a dinner under the stars, serenaded by local musicians playing everything from “Jobim” to acoustic Nirvana (which oddly worked). Once the Caparinias (Brazil’s national cocktail) took effect my laid-back party lasted until late into the night—and the next day we did it all again.  Hike, beach, eat, party, repeat. Life like this could have gone on forever!

Where to Stay on Ilha Grande

The only lodging available for your Ilha Grande tour are Pousadas, or Brazilian-style Bed & Breakfast hotels—very small and rustic but many with loads of charm. Although I have not stayed at any on the hill, my stay at Pousada Ciacara was wonderful. One of the better Pousadas on Ilha Grande, it was at the end of the beach— a quieter area. I had the best room, No. 4, with a balcony overlooking the harbor. With the windows open at night and the gentle lapping of the water against the shore, I enjoyed the best sleep of my trip. What a great way to ease into Brazil. 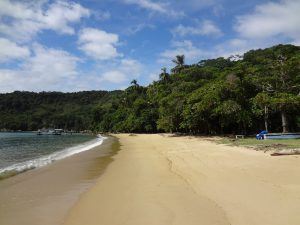 Lopes Mendes, the most popular beach on Ilha Grande, can be reached by either boat/hike or hike alone from Abraão. Be advised, in either case is not an “easy” hike, however, well worth it. Lopes Mendes was listed as one of the top beaches in the world by Vogue in 2010 and Travel + Leisure named it “Miss February” in their 2002 article “A Beach for Every Month.”

Your Own Ilha Grande Tour

Ready for your own rainforest beach adventure on an Ilha Grande tour? Our expert travel consultants at SouthAmerica.travel are ready to design your very own custom tour to South America, including a luxurious stay on Ilha Grande.

Give us a call today! 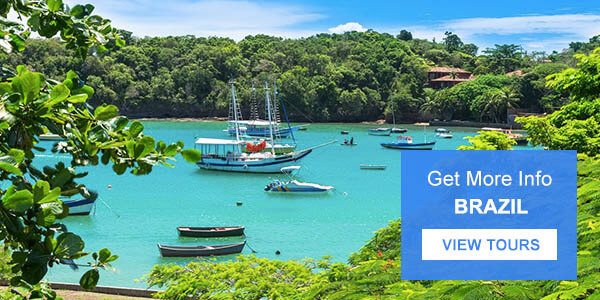