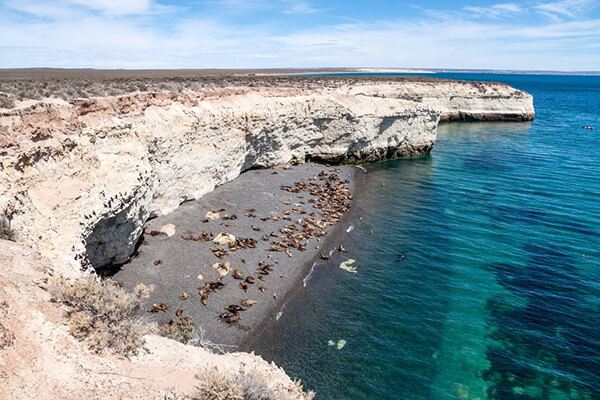 Travel Consultant, Sean McBride, recently went on a trip to Peninsula Valdes Argentina in search of the southern right whale. Follow Sean’s journey along the coast of Argentina and find out if he saw these majestic whales.

Tourist season in Peninsula Valdes (Puerto Madryn) ultimately coincides with the migratory patterns of the southern right whale.  Years ago, the mammal’s curious nature made them the “right” whale to hunt.  By offering themselves to the marauding fleets, the unfortunate whales offered high rewards with minimal risk for those hoping to strike riches in the unforgiving southern oceans. Characteristics that once led to the near extinction of these gentle giants now contribute to their livelihood as the focus has shifted from exploitation to admiration. With the southern right whale population increasing by about 7% every year, now is the best time to see the 2000+ whales migrating to the waters of Golfo Nuevo.

My journey to Puerto Madryn began in July. I decided to join a group of scuba divers that planned to dive into the whale-filled waters of Golfo Nuevo in August. Being somewhat of a whale enthusiast, the allure of sharing the ocean with a modern-day aquatic dinosaur proved too perfect. After completing my open water diving course in Buenos Aires, I was ready for my journey to the frigid winter waters of Patagonia.

Getting to Peninsula Valdes

The starting point for any visit to Peninsula Valdes Argentina starts in the city of Puerto Madryn.  The Trelew airport services Puerto Madryn and is a short 2-hour flight from Buenos Aires. Upon takeoff, I watched as the lush greens of the Pampas gave way to the arid brown scrub of Patagonia.  And as we neared Peninsula Valdes, I was shocked to see the size of the peninsula as it juts out into the Southern Atlantic. Surrounded by pristine waters and the promise of mega-fauna, my squinting eyes scanned the waters with unrealistic optimism for the dark shadows that might indicate the presence of a southern right whale.

I waltzed through the small regional airport of Trelew with minimal fuss and traveled by ”Combi” Mini-bus to Puerto Madryn about 50 minutes north. Now a UNESCO World Heritage Site, the town of Puerto Madryn sits on the westernmost reaches of Golfo Nuevo with a beach that stretches north toward Peninsula Valdes. Very much aware of its assets, Puerto Madryn is heavily geared toward tourism with quality hotels in all categories and a variety of bars and restaurants that line the waterfront.

A mecca for wildlife with elephant seals, sea lions, penguins, dolphins, and seabirds all migrating to the region at different times of the year one can explore many highlights no matter when they visit.  For those visiting the area between late February and the end of April, you can observe orcas at the North Eastern end of Peninsula Valdes.

Whale Watching by Land vs. by Sea

Before arriving in Puerto Madryn, I had harbored concerns that catching sight of whales swimming within the enormity of the Golfo Nuevo might prove difficult. As soon as I arrived at the beach of Puerto Madryn, such fears were entirely quashed. I saw as many as ten whales at one point, all visible from the shoreline. I sat and enjoyed their acrobatic show of fluke slapping, breaching, and fin sailing. 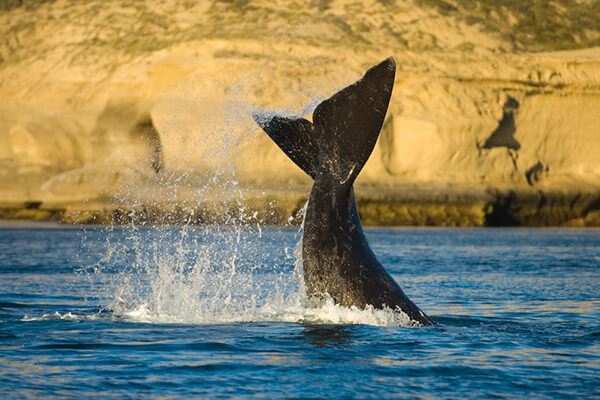 There are some whales watching tours to choose from, all of which leave from both Puerto Madryn and the Peninsula Valdes and range from 1 to 8 hours.  Multiple sightings are nearly guaranteed, and whales often swim alongside ships for a few minutes. Undoubtedly the crowning jewel of the region’s whale watching fleet is the Yellow Submarine. An engineering masterstroke, the Yellow Submarine, inverts the concept of a fishbowl by having a specially designed hull that extends downward into the water and allows passengers to observe whales through windows that run along the ship’s subaquatic sides. The upper deck will enable passengers to see whales by more traditional means; however, down below is where one can enjoy a truly unique and much more complete whale watching experience.

A sophisticated and cultured predator, the orcas of the region, perform a hunting technique that is unique to only this small corner of the world. From the beach, visitors can observe the orcas darting from the surf onto the beach in dramatic bursts to snatch seals from the shoreline. This incredible display of cultured predation is not for the squeamish as attacks can be quite bloody and is a far cry from the traditional perception of the orca as being some sort of cuddly sea panda. None the less, this is an excellent opportunity for nature lovers lucky enough to witness something truly unique in the natural world.

After observing the whales from the vessel and shore, I started my diving excursion. I completed 4-dives over two days and was fortunate enough to swim through the hull of a wreck where I saw several sea lions.  Although I did not see a whale while I was diving, I still enjoyed the wildlife and pristine ocean. 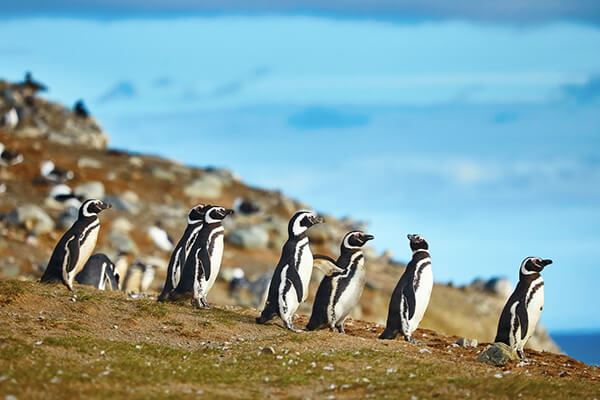 The Punta Tombo penguin colony is located south of Puerto Madryn. There are daily excursions to the colony, allowing visitors to observe the Magellanic Penguins up close in their natural habitat. While the physical attributes of the Magellanic penguin enable it to dart through the water with streamlined ease, their high center of gravity and tiny legs make walking on land adorably awkward. Watch the penguins waddle as they scurry across the stony shore amongst a raucous crowd of black and white. Tours are full-day with several more highlights along the way, including a visit to a Paleontological Museum.

A 20-minute ride south crisscrossing past Chubut Province takes you to the Punta Lomo Seal Colony. There is a vantage point above the cliff that overlooks the seal-filled beach where visitors can see the region’s permanent seal colonies.

Ready to book your trip to Puerto Madryn? Our Experts are here to help!

Seamlessly combine any SouthAmerica.travel tour with a whale-watching trip in Puerto Madryn.

Sean hails from the hills of Donegal in North Western Ireland. A born traveler Sean studied Geology and worked in various positions on Ireland's weather-beaten Atlantic coast before finally setting off into the World at the age of 22. He spent a year living in Australia and several months traveling through South East Asia but with its irrepressible Latin charm and majestic scenery, it was South America that made the most incredible of marks upon the young traveler. Now in his eight-year on the American sub-continent Sean operates out of our Buenos Aires office happily providing his expertise and experience to our clients.