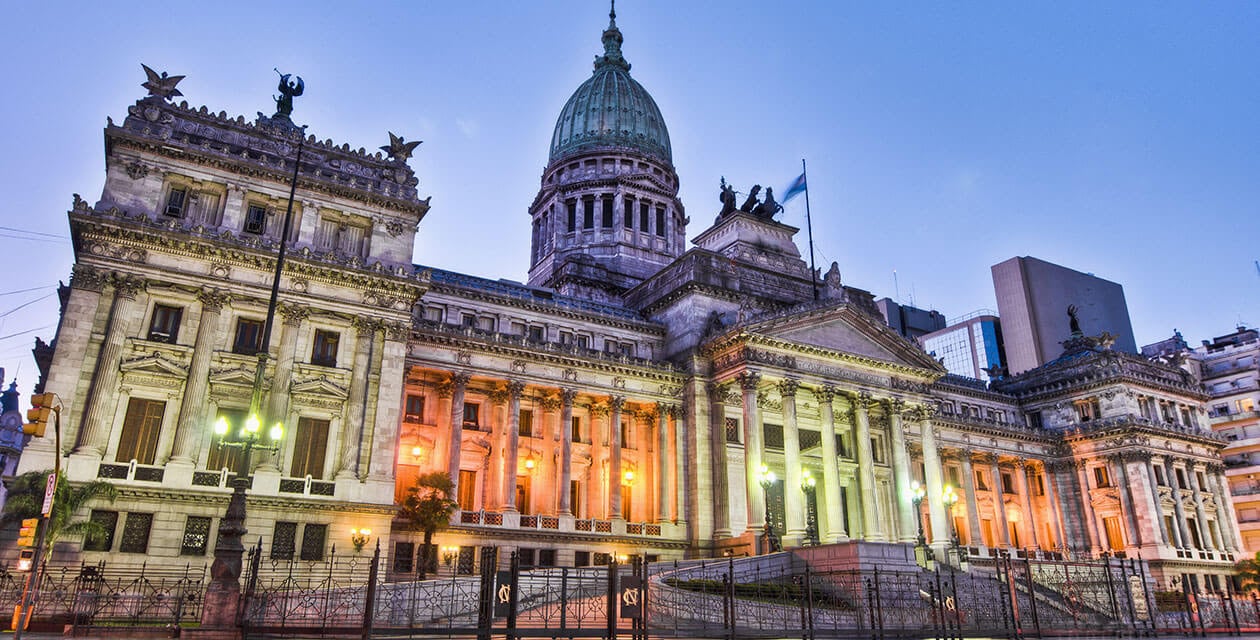 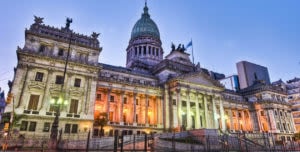 Our Buenos Aires tours offer travelers a chance to discover one of South America’s most sophisticated and romantic cities. See its European-style architecture in the Recoleta district as well as some colonial-style houses in the neighborhood of San Telmo and of course Puerto Madero. Our tours in Buenos Aires also provide the opportunity to enjoy a Tango Show at a trendy tango club. Have a 3-course meal and sip a glass of Argentine wine while enjoying professional dancers performing to live music on an Argentina honeymoon tour.


Any Argentina tour must include the “Paris of South America,” Buenos Aires, and don’t stop there. In addition to Buenos Aires sightseeing, there are plenty of places near Buenos Aires that you should tack on to your trip. Consider a trip to the wine country of Mendoza or a visit to Argentina’s famous gauchos. Iguazu Falls tours from Buenos Aires are popular, as Brazil and Argentina are two South American countries easy to combine into one itinerary.

This deluxe tour is perfect for a honeymoon or those who want to see the highlights of South America in style. On this del...

We’ve put together our ultimate South America itinerary – it’s an extensive list, so be prepared for qui...

Experience the Andes mountains, the Lake District and Buenos Aires on this Chile & Argentina Tour. Travel from Santiag...

This tour takes you to the two southernmost counties in the continent: Chile and Argentina. Visit Santiago and Buenos Aire...

Experience more than Patagonia, more than what is commonly visited. Begin in Buenos Aires, a European-inspired city common...

Experience the best of Argentina and Chile on this food and wine tour! Let your taste buds do the talking during a Buenos ...

It’s Carnival fever! Gear up for a celebration of samba music, elaborate costumes, and vibrant nightlife known as Ri...

Explore South America’s most beautiful cities and highlights on the Pacific coast as well as the Atlantic on this 37...

To learn to tango in Buenos Aires is not only for a honeymoon. Revel in the romantic natural wonders of the Andes Lake Dis...

The Rhythm of Buenos Aires & Uruguay

This 8 day Argentina and Uruguay tour includes an in-depth tour of Buenos Aires in Argentina, and Colonia and Montevideo T...

Things to do in Buenos Aires

On a Buenos Aires tour, visit Buenos Aires historical attractions such as the Casa Rosada, and the Plaza de Mayo, the scene of the 18th-century revolution and the remnants of many political events. Also, taste testing Argentine wine, dining on delicious asado steak, dancing the tango, and exploring the various neighborhoods are all must do's on a trip to Argentina. There is an abundance of things to do in Buenos Aires and the city is easily combinable with other fantastic destinations. For example, combine one of our tours in Buenos Aires with an escape from the city excursion. Embark on a countryside adventure to an authentic Gaucho Estancia, where you can watch gaucho cowboys sheering sheep, herding cattle, and training horses. Go horseback riding, or just relax at the ranch for an afternoon. Another option for travelers is taking a short train ride to Tigre, a perfect day trip from Buenos Aires. Here, you can enjoy a riverboat ride and relax while exploring the lagoons, canals, and summer homes of this posh neighborhood. Or, maybe a trip down south to Argentine Patagonia is of interest. All in one Argentina travel package, combine Buenos Aires, El Calafate, and Puerto Valdes for one unforgettable trip. For more tips and tricks for Buenos Aires, contact one of our experts!

Neighborhoods to visit on a Buenos Aires city tour

There are a number of beautiful neighborhoods to visit in Buenos Aires. Starting with San Telmo. The streets of San Telmo are somewhere between antiquated and modern, beautiful and crumbling. Graffiti is everywhere, as is some of the filteado scrollwork that I was so looking forward to seeing. San Telmo was once where the rich porteños lived at the turn of the century until they fled the yellow fever in favor of the now-posh barrio of Palermo. So the 19th-century buildings retain an elegant decay, with marble adornments, intricate facades, and tall balconies, but many are in disrepair. There has been some gentrification in the past decades, as the revival of tango milongas draw a crowd. On a Sunday, walk through the crowds on Calle Defensa towards the San Telmo Market. The outdoor crafts fair is where calabasas, records, t-shirts, and other trinkets are sold. There are some antiques sold in Plaza Dorrego, and inside the indoor market as well, but all the action seems centered on the street.

Palermo is known for its cafes, bars, nightclubs, boutique shops, museums, and parks. Visit the Evita Museum - well laid-out, built appropriately in the house where Evita set up a charitable home for the homeless. The first floor has a room with mirrors where nuevo tango music plays and a movie reel of Evita's funeral runs. Other displays on the first floor tell of her childhood and adolescence, the youngest of several children who showed an interest in acting at a young age. There are pictures of her modeling at 15. Another stop well worth included on a tour is the MALBA art museum which includes pieces by Xu Solar and Diego Rivera.

Puerto Madero is a regenerated dock area and as such is a very modern part of the city and walking is easy here. All the streets in Puerto Madero, which is like an island connected by bridges, are named after women. And the Woman's Bridge is beautiful - it is cantilevered and opens horizontally.

Take a Buenos Aires Street Art Tour for an unusual insight into the city. There are a couple of options:

The south of Buenos Aires is an area with small houses and traditional cafés. Visit the neighborhoods of La Boca, Barracas, and San Telmo to see artworks by artists from Argentina and other countries, such as the heart-touching portrait of a kid named David painted by Cuban artist Jorge Rodríguez-Gerada. The highlight of the tour is a massive mural painted solely by one artist: Alfredo Segatori, aka El Pelado ("the bald guy" in Spanish). His piece of art is called ‘El Regreso de Quinquela’ and pays homage to Quinquela Martín, a late 19th-century post-impressionist painter born and raised in La Boca neighborhood. As he knew he was getting close to breaking the record of the world’s biggest mural painted by a single artist, El Pelado integrated the neighborhood of Barracas in his mural.

Palermo, Colegiales, and Belgrano are colorful and trendy neighborhoods where artists from a variety of backgrounds leave their marks through stunning street art. Pass by a facade completely covered by Gualicho’s fantasy world of friendly cartoon characters or see the mysterious paintings of Pum Pum, a famous street artist who hides her identity.

Include a Buenos Aires Tour with other Activities & Destinations

Download our FREE Argnentina Travel Guide and get inspired to travel to Argentina. Browse through 30 pages of travel planning tips and ideas – a great resource for planning your Argentina dream vacation.

Thinking about a Buenos Aires trip? Here’s a list of frequently asked questions we often hear from our guests.

Is Buenos Aires safe to travel?

Yes, Buenos Aires is a safe city to visit. In common with many cities around the world, sensible precautions include not wearing expensive jewelry and watching out for pick-pockets. It is best to book taxis in advance rather than hail them on the street. Aside from these normal precautions the city is very safe and welcoming to foreign visitors and is a must-see destination in Argentina.

How much money do I need per day in Buenos Aires?

Buenos Aires really is a city where you can spend as much or as little as you wish! On one of our tours of Argentina, accommodation, transfers, and excursions will be included so the main thing you need to budget for is meals. In this respect, Buenos Aires is good value, offering excellent food and drink at reasonable prices considerably below those of the USA and most European countries.

When should I go to Buenos Aires?

Sitting quite far south on the South American continent, Buenos Aires has distinct seasons. The winter months of June to August can be quite cool with average highs of around 15°C. In summer, from December to February, typical highs are around 28°C. Rainfall is fairly constant and not particularly high year-round. The spring months of September to November are particularly nice months to visit Buenos Aires, trees are coming into flower and the city has a very pleasant climate.

The Best Steakhouses in Buenos Aires

Where Should I Go For A History Tour Of Argentina?