The Most Popular Food in Brazil
Brazil News

The Most Popular Food in Brazil

One of the best things to do in Brazil is to try the food. That’s right, the food in Brazil is incredibly scrumptious! From the Pao de Queijo to empanadas to Feijoada, your taste buds will be on a ride. Follow along and you’ll know all the best food in Brazil to try on your Brazil tour. 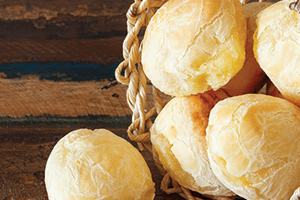 Pão de Queijo consists mainly of tapioca, water, milk, and egg. This meal originated in Minas Gerais, a south-east Brazilian state. The indigenous Guarani people pounded native cassava to make bread prior to the arrival of the Portuguese.

When missionaries arrived, they tried using the land to grow wheat, though it turned out unsuccessful. They then used tapioca for this recipe and in the 19th century, added milk and eggs. Tourists can find Pão de Queijo available around the clock in Brazil and often sold in bars, making it one of the most easily accessible Brazil foods on this list. However, locals most commonly eat Pão de Queijo at breakfast, fresh from the oven, and accompanied by a cup of exquisite Brazilian coffee. Come try the delicious Pão de Queijo, accompanied by the impeccable coffee, for yourself on Brazil’s Coffee Region and Colonial Highlights Tour. 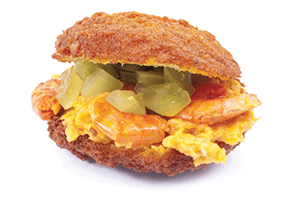 Peeled beans are the main ingredient for acarajé.  These beans then mold into a ball and deep-fry in palm oil. Acarajés are most commonly found in Salvador, Bahia. The selling of acarajé is recognized as a female dominant profession, dating back many centuries.

The commercialization of acaraje began in a period of slavery with “slaves of profit” [women that worked in the streets selling delicacies in their stands]. Even with the end of slavery, the selling of the acaraje remains highly relevant to many women in Bahia. Their daily routine currently begins with getting up early to go to the market for quality ingredients. Then selling their freshly made acarajés. Tourists can find deliciously authentic acaraje on the streets as they tour through the historic city of Salvador.

Feijoada is a stew made from beans, beef, and pork; and considered the national dish of Brazil. Feijoada developed from feijão which translates from Portuguese into “beans.” A group of friends or family usually eat feijoada on the weekends, or over an extended lunch period. Locals recommend tourists eat and savor feijoada slowly as comfort food, due to its size and heaviness.

A few theories of origin surround this dish however, this stew remains an integral part of Brazilian culture which can be experienced further through our many different Brazilian tours. The most recommended restaurants to eat and experience feijoada for the first time are Casa da Feijoada in Ipanema and Bar Mineiro in Santa Teresa.

The main ingredient for farofa consists solely of a toasted cornflour mix. Though, optional ingredients may include varying amounts of salt, smoked meats, and spices mixed into the cornflour. Daily farofa, however, is more basic and excludes optional flavors. Commercial production for farofa occurs, though most locals prepare at home based on family recipes.

Farofa is likely eaten at dinner with churrasco, a Brazilian-style mixed grill cooked over charcoal. Commonly at first bite, tourists dislike the dish due to its sandy, gritty nature. Out of all the Brazil foods on this list, it’s one of the most divisive. Though almost all tourists say that through spending time in Brazil, “the habit of eating farofa eventually sneaks upon them.”

Vatapa is a creamy paste of bread, shrimp, coconut milk, finely ground peanuts, and palm oil; inspired by Afro-Brazilian culture. Locals commonly eat this dish in various ways, depending on the region you visit. In the state of Salvador Bahia, Baianas [ladies who have mastered the cooking method of this stew] often serve vatapa as a filling for acarajés.

Whereas in the north and northeast regions of Brazil, vatapa is commonly served over white rice. During Candombié, an Afro-Brazilian tradition meaning to dance in honor of the gods uses vatapa as a ritual offering. Vatapa is one of the popular Brazil foods commonly sold as street food. 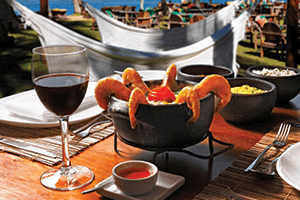 Moqueca is a seafood stew influenced by native Brazilian and Portuguese cuisine. Ingredients include tomatoes, onions, garlic, and coriander, which then cook slowly in a traditional clay pot. There are actually two versions of this dish. The first version is from Bahia named Moqueca Baiana. The second version, Moqueca Capixaba, comes from Espirito Santo state.

Moqueca Capixaba is made with no coconut milk and uses olive oil whereas Moqueca Baiana, made with coconut milk, uses palm oil instead of olive oil. This dish originated at least 300 years ago when Brazilian slaves combined local fish from the port with coconut milk and palm oil brought from Africa into the region. African culture truly comes through this Brazilian dish. History and culture is rich in Brazil, learn more about the ways in which you can experience this first hand! When visiting Bahia or Espirito Santo state, you must try moqueca! However, since it’s quite popular amongst Brazil foods, most restaurants within Brazil serve this amazing dish.

Coxinha is a dough shaped chicken leg, that is filled with chopped or shredded chicken meat. The history behind this meal goes back to Princess Imperial of Brazil and Prince Gaston. Their son’s favorite meal consisted strictly of chicken, though he only ate the thighs. One day, the cook did not have enough chicken thigh to give him and decided to turn the whole chicken into thighs. The cook shredded the chicken meat available and then disguised it with a dough outer, to make it resemble a chicken thigh. This meal then became a huge success.

You can learn more about the Imperial family as you tour the Imperial Museum on the Rio de Janeiro & the Route of Gold Tour. Many different versions of Coxinha can include peas, chopped mushrooms, cheddar, carrots, corn, and other ingredients, however, these versions are not commonly sold. One can easily find traditional coxinha in any snack bar or cafe, as it is one of the most popular food in Brazil.

Empadão cooks traditionally in the oven containing ground beef and mashed potatoes, though can have many variations including chicken, tuna, cod, or rice. This dish originated in Portugal though has become extremely popular in Brazil. Locals consider Empadão Goiano, a version of empadão, as the identity of Goiás, a state in central Brazil. As one of the most popular regional food in Brazil, it contains a symbolic value for festive dates and family gatherings.

This traditional Brazilian dessert contains condensed milk, cocoa powder, butter and chocolate sprinkles covering the outside layer. Brigadeiro normally comes served to children at birthday parties and eaten after the birthday cake. Different reunions also commonly serve brigadeiro, especially when friends get together. Brigadeiro originated after WWII when candidate Eduardo Gomes ran for president of Brazil. Eduardo’s qualifications included a military rank of brigadier and immense popularity due to his good looks and charm. His dedicated voters promoted his campaign by planning gatherings to raise funds and draw attention to Eduardo. Instead of selling the usual campaign items, they thought to create a dessert. Fresh milk and sugar came hard to come by, due to the war, so they improvised with condensed milk, butter, and chocolate.

The Candy of the Brigadeiro became a huge success though Eduardo lost the campaign. Locals see brigadeiro as a huge part of Brazilian culture and even consider it a national icon. Sometimes called Brigadeiro de Colher [spoon brigadeiro], Brazilians make this dessert at home and eat it with a spoon straight from the pot. Gourmet brigadero includes over 50 flavors and found in stores called Brigadeiro Boutiques, however, coffee shops and restaurants around Brazil that serve dessert, commonly sell traditional brigadeiro.

Quindim consists of sugar, egg yolks, and ground coconut; a very popular baked Brazilian dessert. This custard is served cold and most commonly in small portions. Another form of quindim, called quindao, comes in a large ring mold and served in slices. The name Quindim comes from the Sub-Saharan Bantu language which was likely to be the birthplace of many Brazilian slaves during the seventeenth century. And this term signifies “gestures, posture, or the humorous characteristics of teenagers.”

This dessert originated in Portugal with the traditional flavor consisting of almond. However, in the 17th century, Brazilian slaves modified the recipe to include coconut and sugarcane as a result of its abundance. Sold in many bakeries, dessert shops, and on the menus of many restaurants within Brazil, you can find quindim many places.

Consider taking the Ultimate Brazilian Food & Wine Tour to have a chance to try all of these delicious options, and so much more!

Jaclyn was raised in Des Moines, Washington. She is currently pursuing a degree in Marketing and International Business at the University of Washington. She is also currently working on her Spanish language skills with being close to gaining fluency. She loves learning about South America and gaining personal perspectives from others’ time spent there. She is planning to travel the world after graduation with the first destination being Guatemala City. Until then she loves to travel across the Pacific Northwest, finding new cities and national parks to explore. She is a fan of spontaneous travel and is always on the lookout for cute and unique cafes to study at around Seattle.

More from our Blog

10 Foods You Must Try in Lima Peru

10 Top Destinations in Brazil You Need to Visit

15 Things to Do in São Paulo