Explore Santiago On Foot on a Santiago Walking Tour

More and more, Chile is becoming a tourist hot-spot, with Santiago one of its main attractions. Its vibrancy and metropolitan culture draw in hundreds of visitors every year. Plus you can explore Santiago on foot on a Santiago walking tour! Here are some of the best places in Chile, that this beautiful city has to offer. 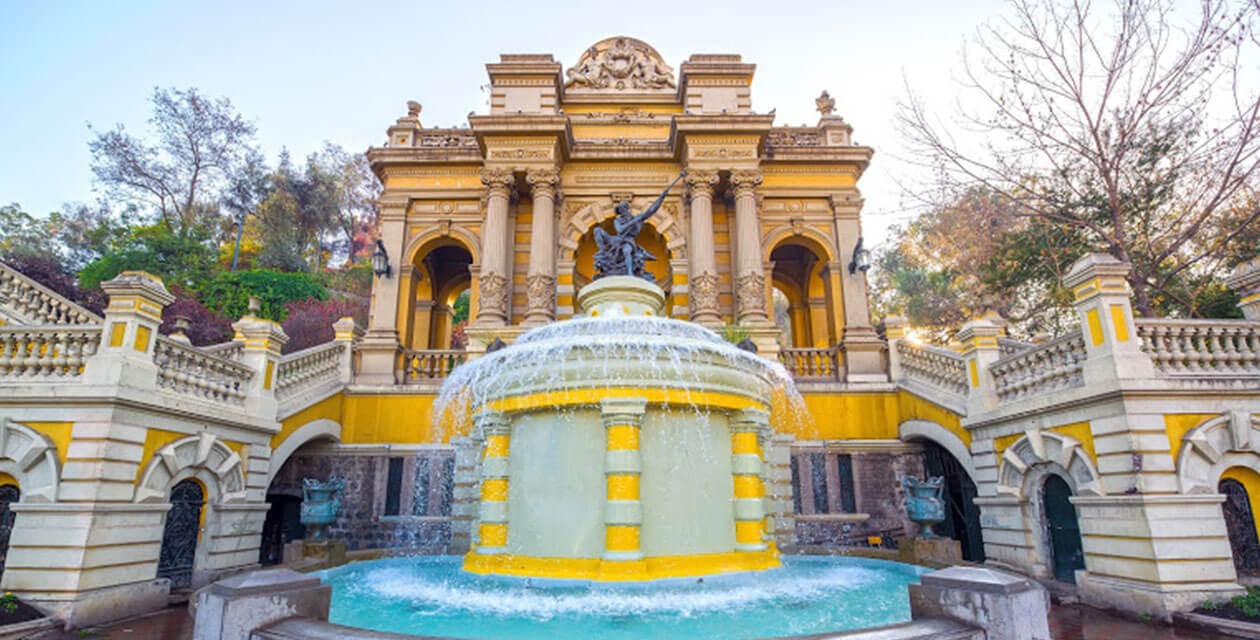 On a Santiago walking tour, you must visit Santa Lucia Hill. What was once an eyesore is now a must-see. Santiago’s Santa Lucia Hill is a major attraction for first-time visitors, and admission is free! Originally referred to as ‘Huelen’ by Mapuches living in the region, Spanish conquistador Pedro de Valdina renamed it ‘Santa Lucia’ when he founded the city on February 10th, 1541.

Then, the hill was a look-out for city planning purposes.  From atop the hill is a perfect view of the city of Santiago, and the surrounding Andes. In 1872, Santiago’s mayor Benjamin Vicuna Mackenna made Santa Lucia a new attraction by adding beautiful fountains, gardens, and a labyrinth of stairways.

It was made a national monument in 1983 and is now a lovely place to admire the stunning cityscape of Santiago. Santa Lucia is open to visitors every day from 9 am to 7 pm.  Visitors should keep in mind that Santa Lucia should be avoided after dark. This historic site can be accessed via the Alameda metro station.

Museum of Memory and Human Rights

Next on your Santiago walking tour, enter a world of Chile’s dark history. Visit Santiago’s Museum of Memory and Human Rights. This museum’s creation was in response to the tragedies that occurred during former Chilean dictator Gen. Augusto Pinochet’s military regime.

During this time, over 3,000 Chileans were killed.  A large space was created and devoted to recognizing these tragic events as part of Chile’s not-so-distant past.

It was appropriately dedicated to the victims of this tragic era. The museum is a three-story space that showcases memorabilia of the victims, including snapshots of those arrested, letters, and even bones of the deceased.

It is an effortlessly powerful exhibition.  The art space is sleek, with glass and copper walls.  It was finished in 2009 and opened in 2010. The Museum of Memory is open to visitors Monday-Friday year-round and is located in Matucana Center.

One of the most colorful places on a Santiago walking tour is the Mercado Central. What was once the capital’s principal wholesale marketplace is now a ‘foodie’ paradise.  Every fish and shellfish along the Chilean coast is in in the Mercado Central.

Watch fish mongrels as they gut and fillet right before your eyes. In the center of the marketplace are restaurants that offer authentic Chilean dishes. However, these can be a bit pricey.

For a wallet-friendly option, head to one of the stalls located on the marketplace’s periphery.  You will find an equally delicious and authentic dish, such as a bowl of ceviche. Yum! Mercado Central is open from 9 am-5 pm Monday-Friday and 7 am-3: 30 pm Saturday and Sunday. It is two blocks north of Santo Domingo. Try to visit during lunch for a lively ambiance. 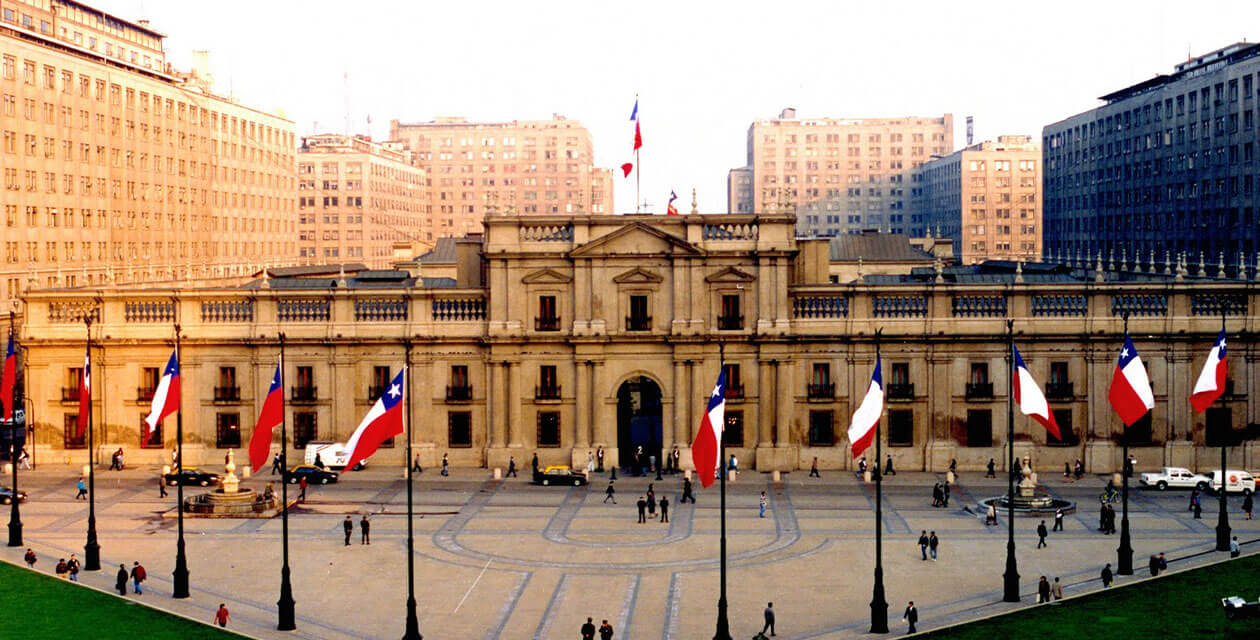 Take a stroll to La Moneda Palace for a taste of Chilean history. The palace harbors Chile’s current presidential offices.

Take your camera for architectural snapshots of the building’s neoclassical style.  It was designed by Italian architect Joaquin Toesca during the 18th century. The building is now a Chilean government structure since 1922. The damage on the north façade was a result of missile attacks during the comp d’etat of 1973.

A monument of Allende now rests on the palace grounds.  Head to La Moneda Palace before 10 am to witness the changing of the guards. La Moneda is located on Moneda & Morande and can be accessed via the Moneda metro station. 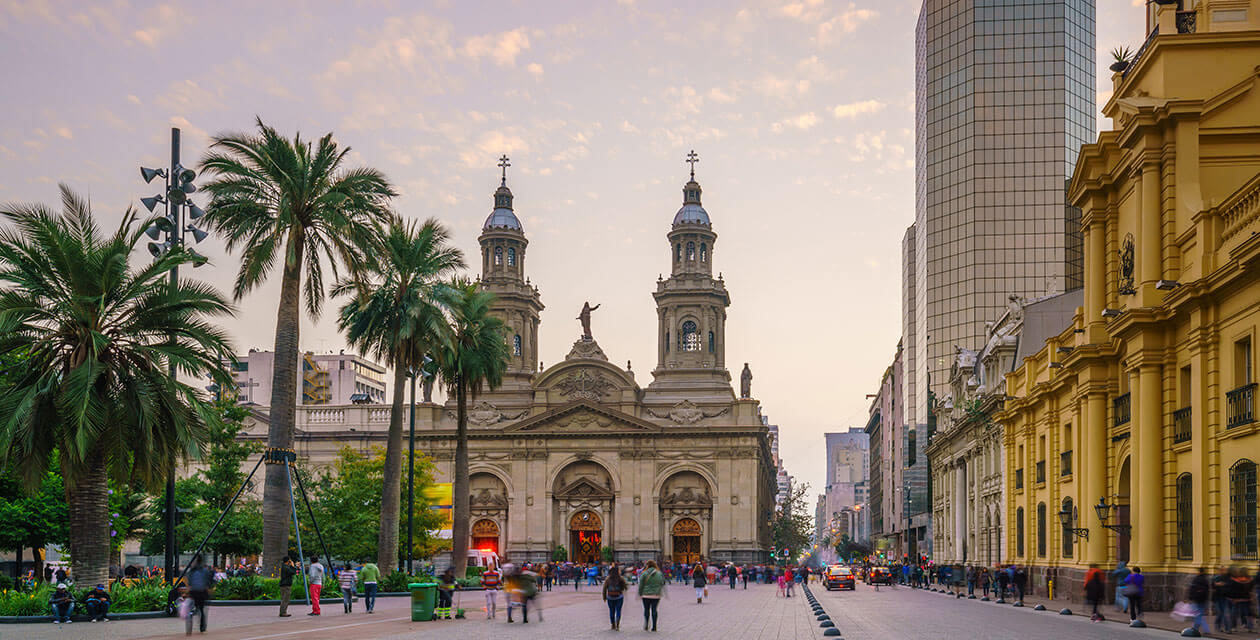 Construction began in 1748 by the same architect behind La Moneda Palace (Joaquin Toesca). Visitors can note the neoclassical style brought on by Toesca in both the cathedral and the Chilean presidential offices.

The cathedral is located on 444 Plaza de Armas and is open every day. Bright, sunny mornings are the best time to admire the brilliance of the stained glass windows.

Ready for a Santiago Walking Tour?

Make way for Santiago for the vacation of a lifetime.  You’ll never forget this extraordinary trip.

This is a guest post from John Gower, analyst for NerdWallet, and a traveler who’s walked the streets of Santiago.  If you are interested in guest posting on our blog, please review the guidelines here and get in touch!