In part 2 of this multi-part blog series, SouthAmerica.travel Clients Penelope and Raphael recount their experience exploring the various regions of Colombia on their SouthAmerica.travel Tour put together by Travel Expert, Jason Mayo. Read on for their adventures from Bogota to Villa de Leyva in the second part of this detailed 5-part series.

The next morning we were picked up by Magda (our local tour guide) for our tour of Bogota’s countryside. The first stop was Zipaquira, a salt mine with an underground Catholic cathedral. It’s even open for weddings although a gigantic cavern would not be my first choice for a romantic setting. Complete with multiple tunnels, Stations of the Cross, a dome, three naves and an eerie magnificent cross that looks like marble, but in a clever optical illusion, it’s actually hollow, reflecting the salt granite surface behind it. All created by miners and artists out of love. 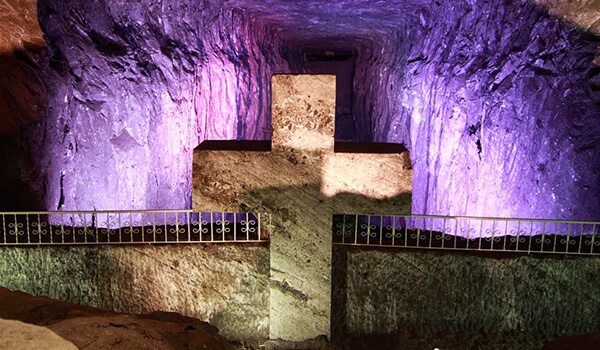 Leaving the dark, spooky, and oddly spiritual tunnels, we continued to Villa de Leyva, a 400-year-old colonial town with cobblestone streets, all white houses (required) with colorful balconies and purple skies. We had a wonderful fresh trout dinner in the town square watching the sunset melt into indigo skies— quite breathtaking. Our quirky boutique hotel, Posada de San Antonio was super chic and arty with original artwork on the walls and many crafty treasures on every possible surface. 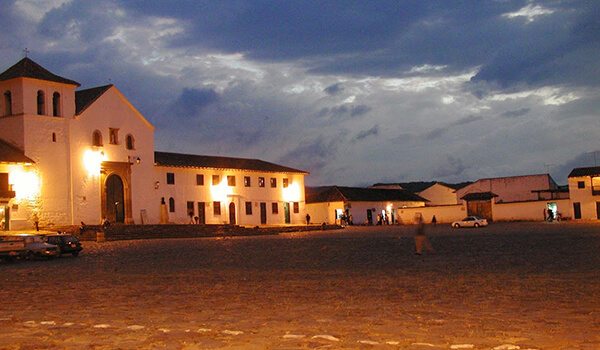 See more >> Recommended Hotels in Villa de Leyva Off the next morning to a dinosaur museum with sea serpent fossils. This area had once been covered with oceans, so their fossils are all gigantic underwater creatures resembling monster crocodiles. Next stop the St. Anselmo Monastery, now a museum. Funny story, our guide, Magda, had been exclaiming and swooning over the succulents in this drier area, rare in Bogota. Succulents being a dime a dozen where we come from, we were not so impressed. I told her how a little tug on a smaller plant would pull it out by the roots and she could replant it in a small pot. She considered coming back another time because the gardener was right there. We were seated in the car when Magda threw open the car door and flung the newly excavated plant onto the floor, gunned the motor and sped off as if we were bank robbers making a getaway.  We teased her about robbing the plant right in front of the monastery. She named the plant Anselmo. Her light laughter dispelled any guilt we might have had.

Follow along in this multi-part series. Next stop is Bogotá’s delicious, caffeine-infused Coffee Region. Find out what activities Penelope and Raphael embarked on, what type of espresso became their favorite and more!