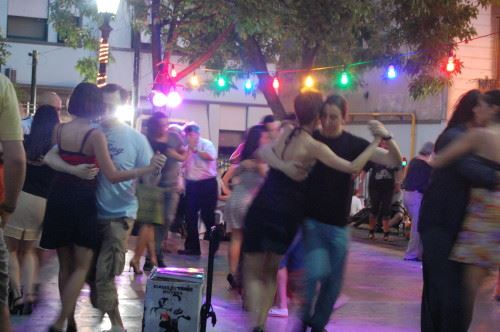 I recently spent a few weeks in South America, and began my vacation in Buenos Aires, the European-style capital of Argentina. I spent about a week exploring this beautiful city and its surroundings. Here are some of my favorite parts and my top recommendations for a Buenos Aires City Tour in 1 week. Of course, it’s possible to spend only a couple of days in Buenos Aires, but I wanted to see all the highlights. 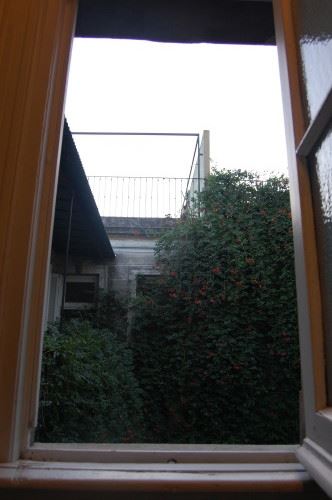 I checked into a “casa chorizo” style guesthouse in Barracas, a barrio near San Telmo. The term “casa chorizo” comes from the architectural style of long and skinny apartments that are built close together, so that they resemble a string of chorizo sausages. Behind the tall wooden doors, there were marble stairs, topped by a wooden nool-post. The stairs and foyer were strewn with one-speed bicycles. The living room was generous, with rich hardwood flooring, a large mirror, and tall ceilings. This type of house typically has an open courtyard as well. The balcony overlooked a quiet residential street, near the Parque Lezama where Ernesto Sabato began his classic Argentine novel, On Heroes and Tombs. This was a great jumping-off point for my explorations of Buenos Aires. I spent several mornings and evenings walking the streets of San Telmo, one of the barrios in Buenos Aires just south of the Microcentro area. The streets of San Telmo are somewhere between antiquated and modern, beautiful and crumbling. Graffiti is everywhere, as is some of the filteado scrollwork that I was so looking forward to seeing. San Telmo was once where the rich porteños lived at the turn of the century, until they fled the yellow fever in favor of the now-posh barrio of Palermo. So the 19th century buildings retain an elegant decay, with marble adornments, intricate facades, and tall balconies, but many are in disrepair. There has been some gentrification in the past decades, as the revival of tango milongas draw a crowd. 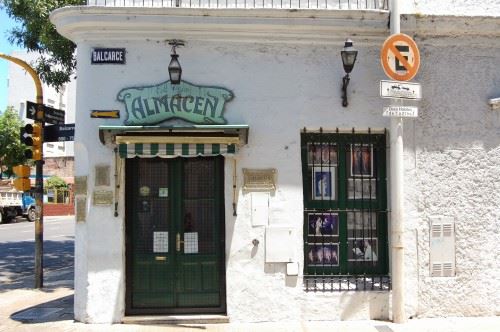 I walked along Tacuari, Piedras, Balcarce, and Defensa streets, which are all parallel to each other. I once read a bit of advice from a famous travel writer (I forget who), who said that when you’re in a new city, you should always try to walk along different streets. And so I set out towards Microcentro each time along a slight variation of my previous footpath. From Barracas, through the neighborhood of San Telmo, to Microcentro, it’s about a 20-30 minute walk. 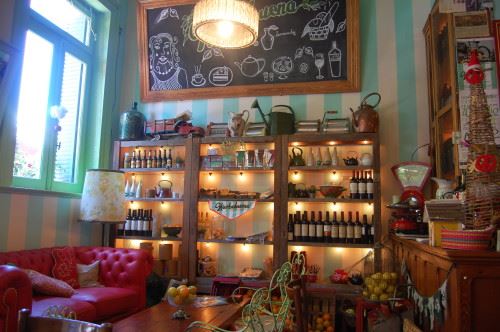 While you’re on a Buenos Aires city tour, make sure to stop for lunch at one of the great lunch spots in San Telmo. I stopped a couple blocks away from my guesthouse at a restaurant called Hierba Buena, located on Av Caseros 454. What an oasis! Hierba Buena is a healthy alternative to the steak houses around Buenos Aires, with salads made of heaps of kale, fresh fruit smoothies, fish and vegetarian plates, and more. I ordered the vegetarian plate, which came with warm apricots, a poached egg, a biscuit, and salad. I also had strawberry lemonade, an appetizer, and simple vanilla ice cream for dessert – all for about $15 USD. The food was delicious, but it was the refreshing natural juices that really thirst-quenching. Besides the welcome air conditioning, the French-style restaurant was outfitted with adorable vintage decor and had such a fun, quirky vibe. 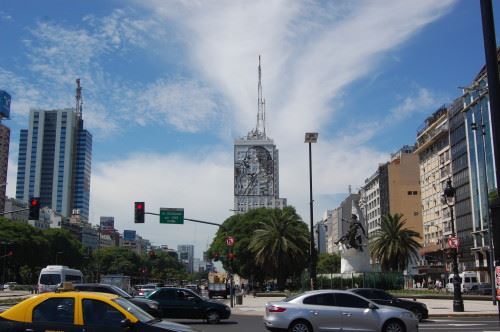 I headed down Avenida de Mayo, in the heart of Microcentro, to the Congresso Building. I learned that this important legislative building never opens its front doors except for the 1 or 2 days each year when the President enters, and in those cases, a red carpet adorns the front steps. Otherwise, lawmakers enter from the sides. From Congresso, I walked back down Avenida de Mayo to Avenida 9 de Julio, which is often called the widest street in the world. In reality, I learned, the widest street is actually in Brasilia. Continuing down Avenida de Mayo, we stopped briefly at Cafe Tortoni, which is a famous cafe notable, where some of the porteño literary elite, like Jorge Luis Borges, once frequented. 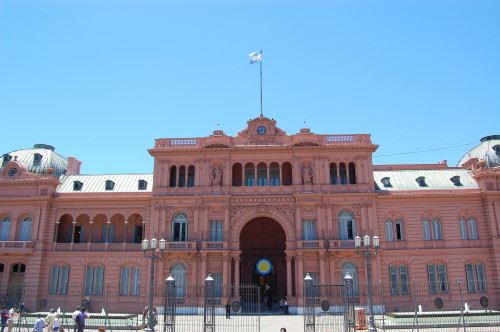 Next I walked to the Casa Rosada, the Presidential Palace. The Casa Rosada is famous because Evita Peron and her husband, the President during the 1950s, spoke from its balconies. Madonna, in the musical Evita, sang the now-famous song “Don’t Cry For Me Argentina” from the same balcony. There are often protests and demonstrations in the Plaza de Mayo, including the Madres and Abuelas who march in a circle around the plaza every Thursday. 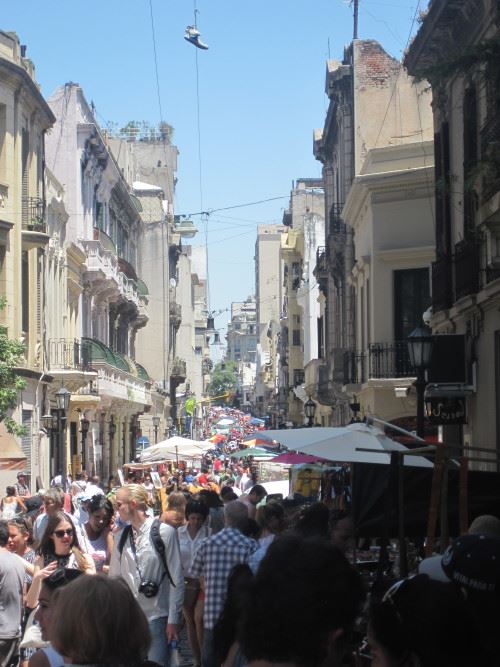 On Sunday, I walked through the crowds on Calle Defensa towards the San Telmo Market. The outdoor crafts fair is where calabasas, records, t-shirts, and other trinkets are sold. There are some antiques sold in Plaza Dorrego, and inside the indoor market as well, but all the action seems centered on the street. There were a couple of tango pairs – one old pair outside the Starbucks, the other younger pair tucked inside a parking lot where choripan was frying. Later, after some of the summer heat had dispersed, I returned to Plaza Dorrego with my housemate, a lady from Switzerland who was in Buenos Aires to learn the tango. We watched the milonga as locals danced under colored lights and the Ombues trees. She locked eyes with one of the portenos, and whatever I was telling her at that moment went unheard. After that first dance, she danced the whole night, with me watching and eating a milenesa, perfectly content. Although I might like to try to learn the tango, this was not the place to learn, but rather the place to show off – and she turned out to be a very good dancer. After the tango, a new set of dancers sprang up for the traditional Argentine folk dances, where couples face each other and cross, waving handkerchiefs. 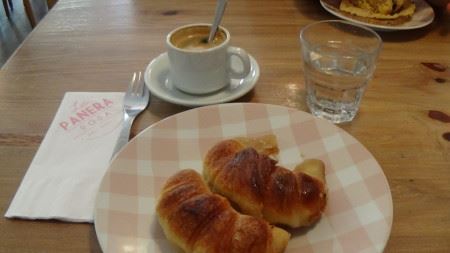 I also explored the barrio of Palermo, which is known for its cafes, bars, nightclubs, boutique shops, museums, and parks. I took the Subte from San Telmo to Plaza Italia, and then walked up Calle Borges to Plaza Cortazar. I ordered an espresso and medialunas at the La Panera Rosa cafe, which offered delicious house-made breakfast foods. Then I walked around the Bosques de Palermo, and continued on to the Evita Museum. I never realized just how powerful Evita’s influence was. The museum is very well laid-out, built appropriately in the house where Evita set up a charitable home for the homeless. The first floor has a room with mirrors where nuevo tango music plays and a movie reel of Evita’s funeral runs. It shows just how devastated the city was when Evita died. Other displays on the first floor tell of her childhood and adolescence, the youngest of several children who showed an interest in acting at a young age. There were pictures of her modeling at 15. When we reached the year when she met Juan Peron, the exhibit guides you up the winding staircase to a new set of displays, where Eva and Juan Peron start their life together. There are artifacts of her clothing, his clothing, and movie reels from speeches, as well as letters and other memorabilia. There are also rooms dedicated to telling about the residents of the halfway house, with pictures of the home as it was at the time. One of the most surprising was the pictures of Evita and Peron in children’s text books and story books, showing how young Argentines were taught to admire the Perons. 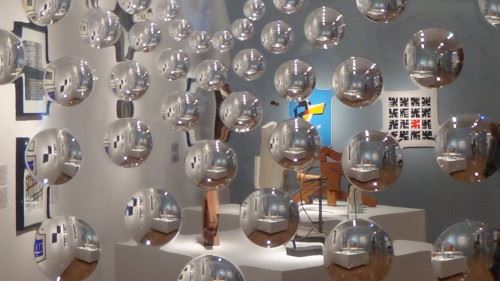 Next, I walked to the MALBA art museum. The most interesting pieces to me were those of the early- and mid- 20th century, although much of the top floor was dedicated later post-modern art. I especially liked the pieces by Xu Solar and Diego Rivera. 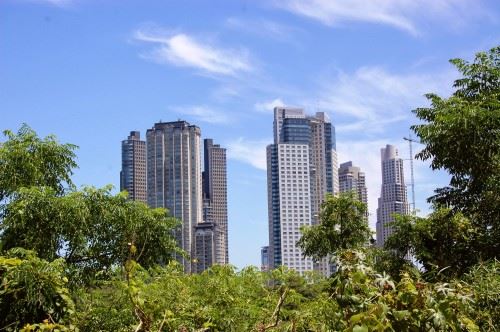 Another morning was spent exploring Puerto Madero and the Reserve just beyond it. First I took a taxi to the entrance of the reserve, and walked through it over a couple hours. The reserve was built up over the past several decades accidentally, as it was the area where dirt and junk were tossed. Near the entrance, I saw the white concrete wall with curved columns where the Rio de la Plata used to flow; now it had receded a few hundred meters. There are central marshlands, rimmed by dirt trails. Along the trails, there are some signs to help identify birds and plants. There are also some wooden walkways and benches. I stopped at the beach and had a picnic lunch. I could see the Buquebus ferries come and go at warp speed. The beach area has several picnic spots and benches. Here I saw several red-headed woodpeckers, green parrots, oven birds, cardinals, and hummingbirds. Then I walked through Puerto Madero to the Woman’s Bridge. All the streets in Puerto Madero, which is like an island connected by bridges, are named after women. And the Woman’s Bridge is beautiful, even without the help of shadows – I went at noon. Even more impressive is that it is cantilevered and opens horizontally.

And A Whole Lot More…

There is so much more that I did while in Buenos Aires, but it’s too much to put into 1 blog post. So stay tuned for more updates on my adventures in Buenos Aires, and other parts of Argentina, Chile, and Uruguay! Click here to subscribe to this blog’s RSS feed. Interested in traveling to Buenos Aires? View our Argentina Tours – we can customize ANY tour to include a Buenos Aires city tour! 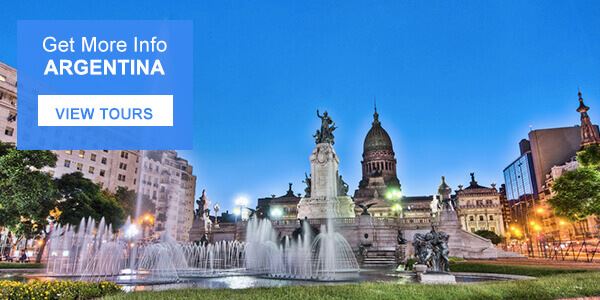