The lists are long: this time, the spotlight is on the Natural World Heritage Sites in Argentina.

If you want to see some of nature’s highlights, you need look no further than the UNESCO list of World Heritage sites in Argentina. UNESCO – the United Nations Educational, Scientific and Cultural Organization ­– endorses both cultural and natural sites located across the globe, with the intention that these important pieces of our heritage be preserved for future generations. Natural World Heritage Sites in Argentina are a must see!

The star attraction at the Iguazu National Park is, of course, the 82 m (269 ft) high, 2.7 km (1.7 mi) wide Iguazu falls. The falls are found on the border between Brazil and Argentina!

Declared a World Heritage site in 2000, these are actually two national parks that together occupy a huge swathe of the desert region in north-western Argentina. The arid landscape is characterised by towering cliffs and hardy shrubs and cacti spread sparsely across the desert sands. Although the views are incredible, the real reason for Ischigualasto and Talampaya National Parks to be designated a World Heritage site is on account of what’s below the surface: fossils. There is simply nowhere else on Earth with a fossil record that compares. In more recent history than the Triassic period, the area also formed the far edge of the Inca Empire, and was home to several indigenous tribes, all of whom having left their mark at sites being discovered in ever increasing numbers, including ancient rock paintings and burial grounds. 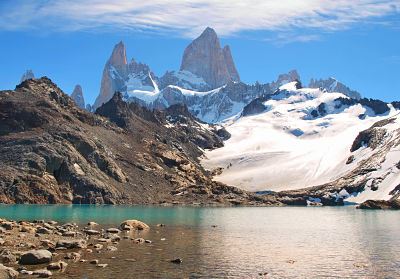 As the largest ice mantle outside Antarctica, it is little wonder that Los Glacieres National Park is one of the most intriguing of all the World Heritage sites in Argentina. In total, there are over 200 glaciers in the park, the most famous and accessible of which is the Perito Moreno Glacier. If you’re feeling adventurous, you can explore the surface of the glacier with a guided hike across the ice. You can also take a boat trip across the lake for the chance to see – and hear – giant chunks of ice splitting from the face and crashing into the water below. The process is called ‘calving’, and the frequency with which it happens at the Perito Moreno Glacier is another reason why it’s a tourist favourite. Elsewhere in the Los Glacieres National Park, you will find rugged, towering peaks and vast, picturesque lakes, including the 160km (99 mi) long Lago Argentino. The village of El Calafate is the usual base for exploring the park.

The final one in the list of natural World Heritage sites in Argentina is Península Valdés, located in the Patagonia region. The peninsula juts 100km (62 mi) from the Argentina coast into the Atlantic Ocean, and features on many tourists’ Argentina wish lists on account of the abundant wildlife. Animal spotting opportunities abound, whether you want to take a boat tour in the hope of catching up with a colony of Right Whales or Orcas, or you want to give your sea legs a rest and stick to the species who make an appearance on land. Penguin fans are catered for with around 40,000 nests; the world’s only colony of Southern Elephant Seals with numbers on the increase; and a large number of Southern Sea Lions who breed here. Apart from the animal life, Península Valdés is also a photographer’s dream, with 400km of coastline specialising in dramatic rocky cliffs, windswept pebble beaches and lonely sand dunes. Do you want to visit the natural World Heritage sites in Argentina? SouthAmerica.travel will be able to put together a custom itinerary for you, taking in all these sites and more!