I arrived at the Hotel Las Torres in Torres del Paine National Park on a day like many other days in Patagonia’s summer: on a windy, but pleasantly sunny day. The drive through the entrance of the park, past Lake Sarmiento, was breathtaking. Condors floated on drafts of wind, and herds of guanacos roamed freely by the roads. The lake’s intense turquoise coloring was mixed by choppy whitecaps as the wind riddled its surface. And the most stunningly jagged peaks I’d ever seen loomed in the background. 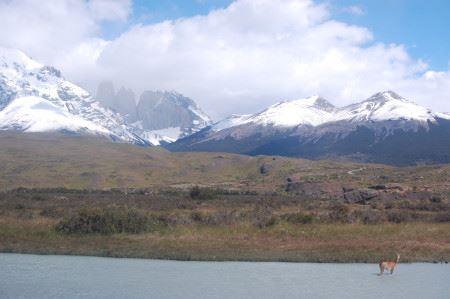 From the moment I arrived at the hotel, I knew I would be in good hands. The hotel is situated on private land within the park, about 6 km from the Laguna Amarga entrance. At the base of the snowy Almiranto Nieto mountain, Hotel Las Torres’s bright red exterior contrasts beautifully with its surroundings. From the gravel road, I could see the horse stables and wide open fields spotted with wildflowers. From a distance, the hotel appeared like a rustic country house, but it operated as a luxury hotel. Inside, the lobby featured cathedral ceilings marked with wooden beams and a set of friendly staff who welcomed my husband and me immediately. 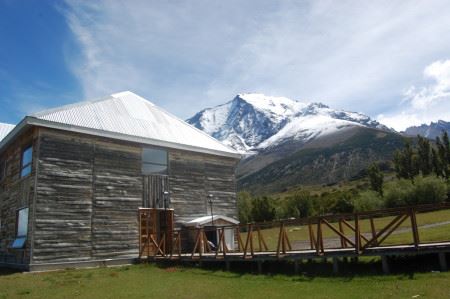 The original buildings were once a house, belonging to a family of farmers originally from Croatia. In the 1990s, the family saw the potential for tourism and began making the switch from farming. Now, the hotel is poised in prime position at the trailhead of two of the park’s most prominent treks: to the Las Torres and to the Cuernos. 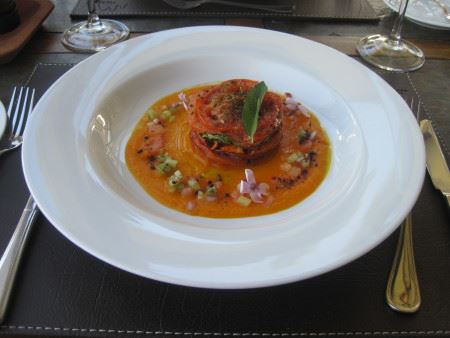 The mid-afternoon sun was glancing through the windows of the Coiron Restaurant, where we had lunch. Then we took off at a quick clip for the Las Torres trail. We wanted to take advantage of the fine weather to hike this 16 km trail, which included a rigorous scramble at the top. We hiked briskly, only slowed to take pictures and admire the sun dappling the valley before us. Around one bend, we met with a gale-force gust of wind, which nearly knocked the breath out of me. We stood in place, not knowing whether to go forward. Would this Patagonian wind haunt us the whole way, I wondered? Thankfully, after a few moments, it died down and we continued. We passed the Refugio, a very basic shelter with backpackers humming in and around it. There was also a spot for camping and a stable for horses. We ambled through some lenga forests and crossed the river several times, then began moving upwards out of the valley. Within a few hours, we reached the top, where the Torres emerged as the silver pipes of some great organ. In the basin was a pistachio-green lake. It was bitterly cold up there, and the sun was just about to hide behind the spires, so we didn’t spend much time there. 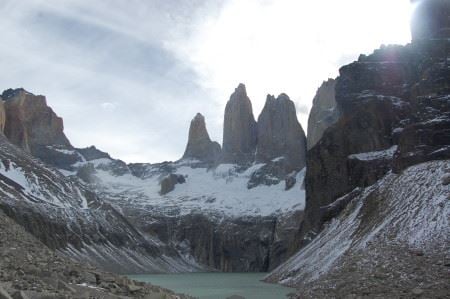 As we prepared to head back down the trail, we caught sight of a quickly moving fox. He darted around the boulders and disappeared within moments. The evening was falling quickly as we headed quickly back down the mountain, stopping only a few times to refill our water bottles in the glacial streams. By the time we returned to the hotel, we were exhausted. We had hiked 16 km on a typically 8-hour hike, in just 6 hours. My legs were tired, but I ambled into the dining room and helped myself to a wonderful dinner buffet. Hotel Las Torres offers a delicious, full buffet, replete with lamb roasted in the oven out back, and tables full of soups, salads, other meats and pasta, and desserts. As the sun set, the southern lapwings, called tero teros, shouted their noisy squawks. 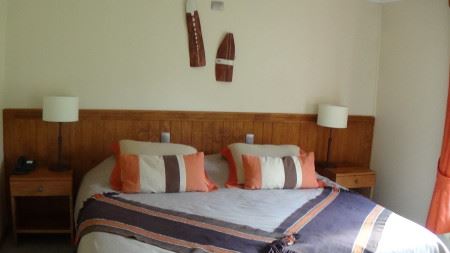 Our room was comfortable and sported a wonderful mountain view of Almirante Nieto. The bed was soft, the shower and bathroom very clean and spacious. It was great to relax and end a long day of traveling and hiking here. 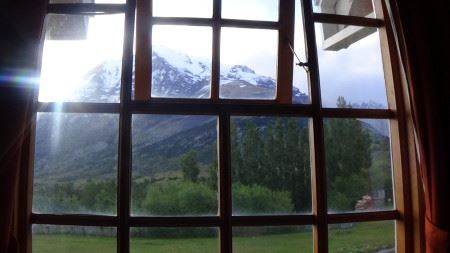 The next day, we rested from intense hiking, opting for the Full Paine Tour and Glacier Gray Cruise, organized by Hotel Las Torres. After an absolutely scrumptious buffet breakfast, equally as impressive as the dinner, we met our tour guide, Diana, in the central hall. She was a very attentive, knowledgeable guide. Our group of about 20-30 people piled into the bus outside of the hotel and were escorted to several different viewing points throughout the park. We were glad to rest on the bus since we were sore from the hike the day before, and also it was raining and cold that day. Diana said, in Spanish and English, “Sometimes it is warm and sunny, and then the next day it is cold and raining. Welcome to Patagonia!” 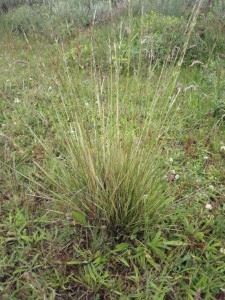 We stopped first along the side of the road, and she led us through a nondescript field, where she pointed out coiron grass and other types of vegetation that the guanacos eat here. She also showed us the piles of scat that the guanacos, especially the males, leave to mark their territory. They return to the same territory year after year. She explained that guanacos live in packs, with one male in charge of all the females and babies. When another male challenges the alpha male, one will be ousted and will have to live alone until he can find another group. That’s why there are sometimes solitary guanacos – they are either too old or weak to fight for dominance. We walked along a lagoon where there was cynobacteria & strombolite growing along the shore. It looked like seafoam. 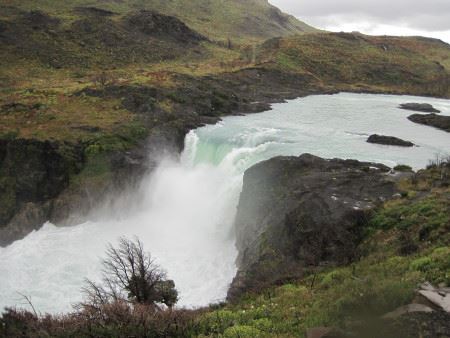 We also visited the Salto Grande waterfall and saw the devastating impacts of the forest fire of 2011. There’s already a lot of new growth but the short, stunted lenga trees are all charred. The Salto Grande waterfall is not particularly big, but it is gorgeous because of the mint green river water, caused by “glacial milk” — meltwater directly from the glaciers. We ate a delicious picnic lunch at the visitor’s center, which is regaled in a field of lupin that bloom every January through April. Our guide had handed out sack lunches that morning, but that turned out to be just the snacks. At the picnic tables, Diana set up wine, beer, sodas, water, fruit, crackers, cheese, veggies, sandwiches, coffee, and tea. It was a bountiful feast, and the warm tea helped me fight off the chill. A mother Upland Goose and her goslings played near our picnic tables. 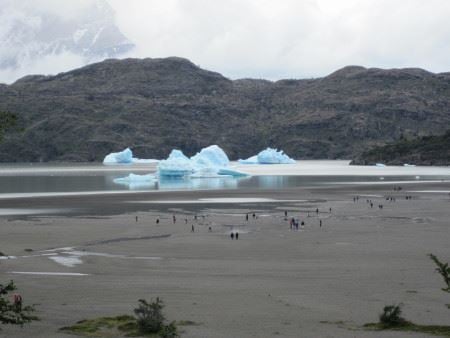 Then we continued on to Lago Grey, crossing a suspension bridge and a wide beach where giant icebergs were beached like silent blue whales. We boarded a motorboat for the 3-hour cruise around the lake to the Glacier Gray, one of the largest and longest glaciers in the park. The fog was persistently hanging down over the peaks of the mountains, but it occasionally lifted long enough for us to see bits of hanging glaciers and frozen waterfalls. Like Perito Moreno, this glacier seemed to draw in the coolness of Patagonia around it, and I shivered as we neared the Glacier Gray’s face. The unfortunate thing about this glacier is that it is difficult to comprehend its massiveness just by looking at the face. From space, it looks like a white boa constrictor that winds its mouth around a dark boulder. 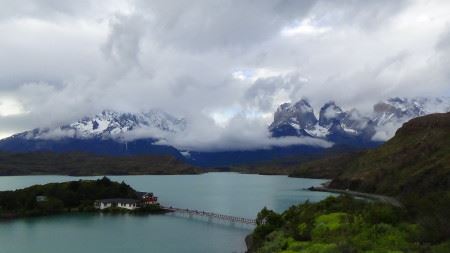 Later in the afternoon, once the clouds had lifted just enough so that we could see the Cuernos, our bus stopped at a lookout point overlooking Lake Pehoe and a little island. The island has a bridge and a hotel connecting it to the world, but it looks as though it is floating on clouds, backed by the mythical Cuernos mountains. The Cuernos (Horns) seem like an angry mob of massive granite peaks, with curved horn-like tips that were carved by glaciers. The tangle of peaks rises up out of nowhere, seemingly, to form this intense knot of fury and majesty wrought together.

Hike to the Cuernos

The following day, we hit the trail again, this time in the direction of the Cuernos. It was another beautiful day, with hardly a cloud in the sky, and I wanted to see the Cuernos without the clouds obstructing their view. I also heard that the hike was much more leisurely than the previous hike. So we set off, following the edge of Lago Nordenskjöld. We passed through lenga forests and enjoyed incredible views of the crystalline lake to the left and jagged peaks to the right. We saw condors and harriers. Once we passed Almirante Nieto, we approached the Cuernos, and soon we could see them in full force. We walked around a bend and a valley opened up, and there we saw the Cuernos Refugio. There were several small cabins built into the woods in the river valley. We stopped at the restaurant and had some overpriced chocolate and a beer. Then we set off for the hotel; it was a long trek (20 km total) and we made it just in time for dinner. 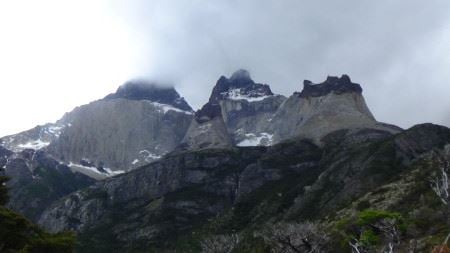 Our final morning at Hotel Las Torres was also blessed with good weather. The morning birds were chirping and there were large hares hopping about the grass. When I saw them out my window, I thought they were the nandu deer I had read about. I watched a long train of horses march across the field in front of the hotel. It was a comfortable place, with very little lacking. We had enjoyed the large fireplace in the lobby, the bar, the friendly guides and staff, the decent Wi-Fi, the tours, and especially the meals. It should be noted, that the staff at the Coiron Restaurant at Hotel Las Torres is impeccable. A troupe of dashing men dressed in traditional Patagonian gear, with dark berets, white dress shirts, cloth belts, and dark pants, served us at each meal, catering to our every whim. They are tireless, even when listening to our broken Spanish. I would miss it here.

See Torres del Paine for Yourself!

Are you interested in visiting the Torres del Paine National Park and stay at the Hotel Las Torres? Check out our Torres del Paine tour package on our website, and fill out the contact form to receive a free quote. Keep in mind, the best time to travel to Torres del Paine is from October through April each year. 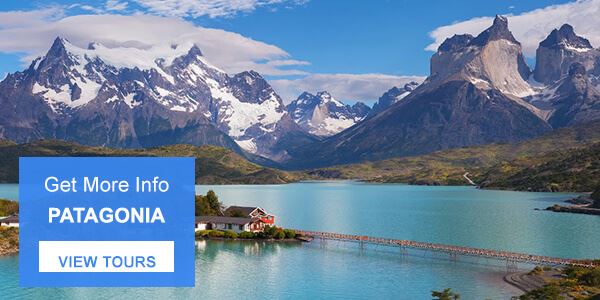