Surfing South America: Where to Go for the Ultimate Waves
Adventure Tours

Surfing South America: Where to Go for the Ultimate Waves

Surfing in South America: Where to Go for the Ultimate Surfing Experience 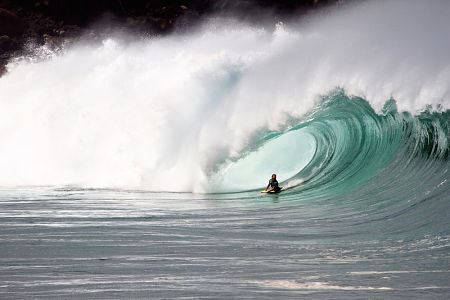 Surfing is one of the most popular oceanic sports in the world. The continent of South America features thousands of miles of coastline with picturesque beaches that receive waves from the Atlantic and Pacific oceans. Add in the ideal climate that most of the continent enjoys for a majority of the year and all the ingredients are there for ideal surfing conditions. Join us for a look at the six countries with the best surf and the locations within each where you might like to shred it up someday soon! Whether you are seeking a guide to surfing in Chile, surfing in Peru, surfing in Ecuador, or surfing in Brazil, this list has you covered! 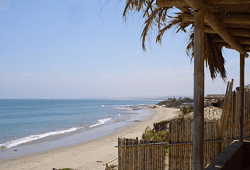 Surfing is a very popular sport in Peru with a long and storied history. In fact, it is said that the origins of the very sport itself might have come from the Peruvian coast (for proof, you can take a Lima city museum tour to see the pre-Incan ceramics that feature surfing images). It also helps that Peru and Polynesia (the more commonly rumored birthplace of the sport) likely connected at an early point in time.  Peru has a wave for everyone, from beginners to the most experienced riders. Peru is a place where people of all classes and backgrounds can participate, thanks in large part to cheaper and more widely available equipment than in decades past. 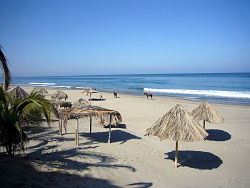 Mancora – located in the northwest corner of Peru along the great Pan-American Highway, Mancora is known for a lively party scene, and some pretty good surfing too. A town of less than 10,000, the citizens regularly welcome more than a quarter-million guests each year. As such, the town has a very large number of nightclubs and eateries per capita, as well as ample accommodations. It’s very hot from December to April and the sunny weather during the remainder of the calendar makes for good surfing year-round.  This spot is also said to feature the largest left point break in the entire world! Combine with: a tour of nearby Cuenca, Ecuador

Ecuador is loaded with great surf spots. One of them is even located over 500 miles from the main shoreline (the Galapagos Islands). With over 2,200 miles of coastline and the Equator running directly through the country, ideal surfing conditions can be found virtually year-round. Ecuador is also one of the more inexpensive surf locations on the continent, as compared to relatively more expensive beach destinations in Brazil and Chile. Be sure to pack a wetsuit just in case though, as the Humboldt Current can drop water temperatures below the usual 68 to 75-degree waves that beaches typically enjoy. 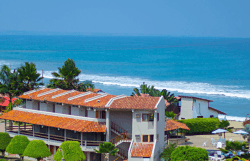 Montañita this small town has a big reputation for surfing. Located along the fabled Ruta del Sol, the typical surf season is November to April. Two-meter waves can be found January through March and the town hosts an international competition during Carnival in February each year. Just as the name ‘route of the sun’ suggests, the surrounding areas are known for sun and waves, partying and relaxation and lots of great little beaches. Combine with: a tour of nearby Guayaquil Galapagos Islands the Galapagos are associated with many things such as the research work of Charles Darwin and breathtaking wildlife like the giant tortoise. Surfing is not typically a large draw for Galapagos tourism, but this can be advantageous for the novice rider looking for some time and space to practice, far away from the often crowded beaches of the mainland. The island chain benefits from its location on the Equator by receiving waves from both the north and south Pacific. San Cristobal is the epicenter of island surfing here, which can be done year round. November to March is the ideal season for swells, with the full season running November through May. Book it! — a tour of the Galapagos Islands Other Ecuador surf spots to check out: Atacames, Punta Carnero, Salinas, Manta, Playas

Brazil is a massive country with thousands of miles of surfable coastline and swells that come down from the North Atlantic and up from Antarctica. We will focus on the southern part of the country where conditions are the most consistent, and where there is less concern over shark attacks as compared to the northeastern portion of the country. 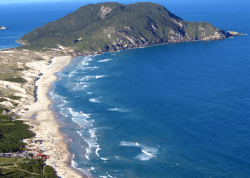 Santa Catarina – the state of Santa Catarina is known for its resounding beauty, with the capital city of Florianopolis as its crown jewel. This is where some of the best surfing in the country can be found. Similarly, the cities here are considered some of the most modern and livable in the country, rating high for safety, cleanliness and organization. Surfing was brought to Brazil in 1928 when an American pushed off from Copacabana Beach in search of swells. The sport took off in the southern regions during the 1970’s and has remained extremely popular ever since. Swells can be found year round, with the true season running April to October. The region also plays host to a good number of professional competitions and events such as the ASP World Championship each April. There are a lot of options for beaches here, and many surfers can find their ideal spot to drop in and ride a few waves. Just ask around and locals will usually help direct you to the best beach based on your experience level. Book it! — A tour of Santa Catarina and Florianopolis Combine with: Oktoberfest in nearby Blumenau

With more than 3,000 miles of coastline, Chile is sure to have at least a couple of spots worth paddling out to. Surfing in Chile South America can be surfed nearly year-round, with the exception of the winter months of July and August. A wetsuit is required just about anywhere you go, however, as water temperatures typically hover between the mid-’50s and low 60’s (F). Nevertheless, Chile attracts riders from all over the world thanks to consistent six-meter waves that can be found in multiple locations.

Arica – one might not expect to find great surfing on the edge of a desert, particularly the driest desert in the world (the Atacama). But that is exactly what the oasis of Arica offers in the form of a delightful little seaside town. This region has been inhabited for thousands of years now, but surfing didn’t really take hold until the 1970s. Arica is home to Playa Gringo, aptly named for the large number of Americans that show up each year to tackle waves up to four meters high. Arica is in an extremely remote part of the world, so plan your trip carefully to avoid spending too much time on the trek and more time on the board. The good news is that the area is cheaper to visit than most of the rest of Chile, which tends to be one of the more expensive countries on the continent, but also one of the most modern. Combine with: a tour of nearby UNESCO city Arequipa, Peru, or a classic tour of La Paz, Bolivia

Pichilemu – while it might not be the easiest paddle out around, Pichilemu and the surrounding spots are worth it in order to take advantage of consistent left points that can rise up to 2-meters. The national championship is held here and the region is considered the hands-down winner for the best surf spot in the country. It’s cold, and a wetsuit is pretty essential, but the wide variety of conditions that can be found here provide a wave for people of all skill levels and abilities. Pichilemu is a popular destination for Chileans from the big city of Santiago, and many locals surf regularly in addition to the usual stream of visiting riders. Combine with: a tour of nearby Santiago or venture out to Easter Island

Despite a considerable lack of reputation, great surfing can be found up and down the diminutive Uruguayan coastline. Beginning with Solis Grande in the West and running through Barra del Chuy on the border with Brazil to the East, at least 20 great surf locations with more than 80 breaks can be found. Thanks to its low profile, Uruguayan beaches are not usually crowded with surfers, as most riders typically focus on neighboring surfing giant Brazil. 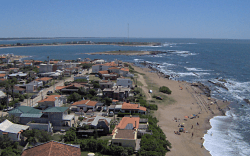 La Paloma – this little fishing village with a relaxed vibe and expansive beaches sits right in the middle of the stretch of surfable Uruguayan coastline. The town of fewer than 4,000 people sits on a peninsula that juts out from the coastline, making for a wide variety of surfing conditions. The peninsula has created two bays as well as the waves that wash ashore. The best surfing can be found from October to May here, with three specific locations providing for occasional two-meter waves. Just south of the peninsula is Zonja Honda, and to the north, you’ll find La Aguanda and El Desplayado. Combine with: a tour of nearby Punta del Este 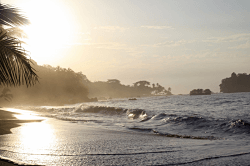 Colombia might not be as well known for surfing as some of its neighbors, but don’t let that fool you into thinking that a decent swell can’t be found along its coastline. The country is rapidly emerging as one of the hottest travel destinations on the continent, and surfers are taking note as well. The Colombian coast is divided into two parts. Running northeast from the border with Panama, Colombia and Venezuela combine to provide gorgeous Caribbean beaches as far as the eye can see. South of the Panamanian divide, the Pacific Ocean washes up on the shores of Nuqui, our final stop on the South American surfing map. 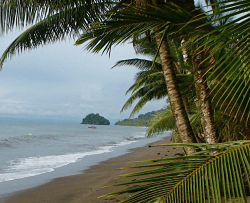 Nuquí – known for fishing and livestock, this remote destination is capable of stirring up some decent swells, depending on the activity of the often fickle Rio Nuquí. If you’re up for making this trek, be sure to do so during the June to October window for the chance to add a whale watching tour. This is the migratory time of year and the waters of the Pacific team with pods of massive whales. Nearby surf spots include the Playa Olímpica and Guachalito near Terquito beach.  Learn more: view our recommended hotels in nearby Medellin Are you ready to book a South American adventure? Complete the below form to contact our Travel Team and begin planning your customized itinerary today! 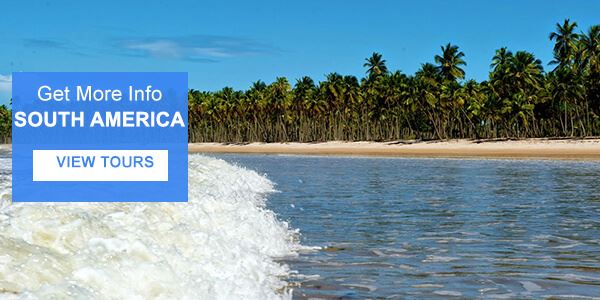