15 Things to Do in Sao Paulo
Brazil Tours

15 Things to Do in Sao Paulo

For those who are interested in traveling to Brazil, make sure to include São Paulo in your itinerary, as there are plenty of things to do. São Paulo is the most important economic center in Brazil and the capital of culture in Latin America. This vibrant city has a lot to offer with its great architecture, history, culture, world-class restaurants, museums, theaters, and famous boutiques. Here are my expert-rated ideas for what to do in São Paulo. 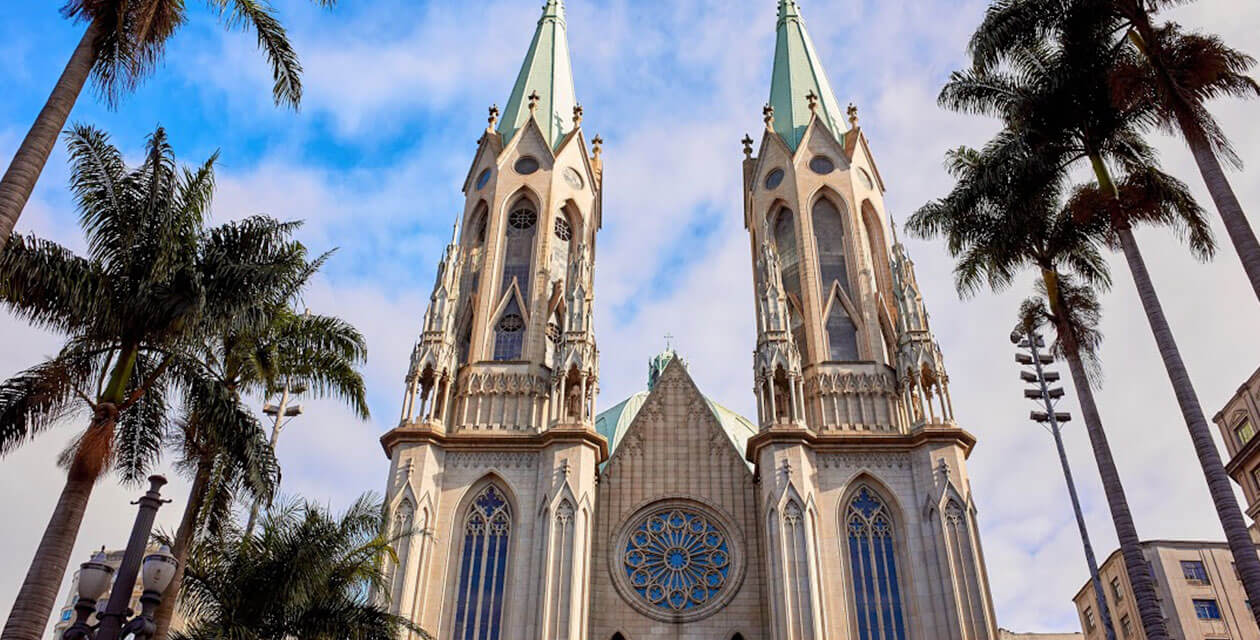 The Sé Square is the ground zero of the city and the Metropolitan Cathedral of Sé is an attraction that goes beyond religion as it represents a large part of São Paulo’s history. In addition to the cathedral featuring unique architecture, the cathedral is the largest church in São Paulo and one of the five largest neo-Gothic temples in the world. It has a capacity of about 8 thousand people, and it is from there that the distance from any point in the city is calculated. Here, people of all styles get together, and the square is a reference for the old city center.

#2. Go Shopping on the Avenida Paulista

To see more about the amazing architecture of the city you can walk on one of the most important avenues in São Paulo. Paulista Avenue is located between the “old” and “new” parts of the city. There are many museums, theaters, cinemas, exhibition halls, large bookstores as well as craft fairs and street artists. Avenida Paulista is where the business center and cultural landmarks meet and represent all the plurality of São Paulo. This avenue has an extensive shopping area and it’s home to the São Paulo Museum of Art, the Rose’s House, and Trianon Park, reminiscent of the Atlantic Forest native to the city.

The São Paulo concert hall is where symphonic and chamber performances take place. It is part of the Júlio Prestes Cultural Center, in the old and historic Júlio Prestes train station. It is the headquarters of the São Paulo State Symphony Orchestra and the “Osesp” Choir. It was designed according to the most up-to-date international standards and many experts consider it one of the best acoustics in the world.

#4. Sip on Coffee at the Pátio do Colégio 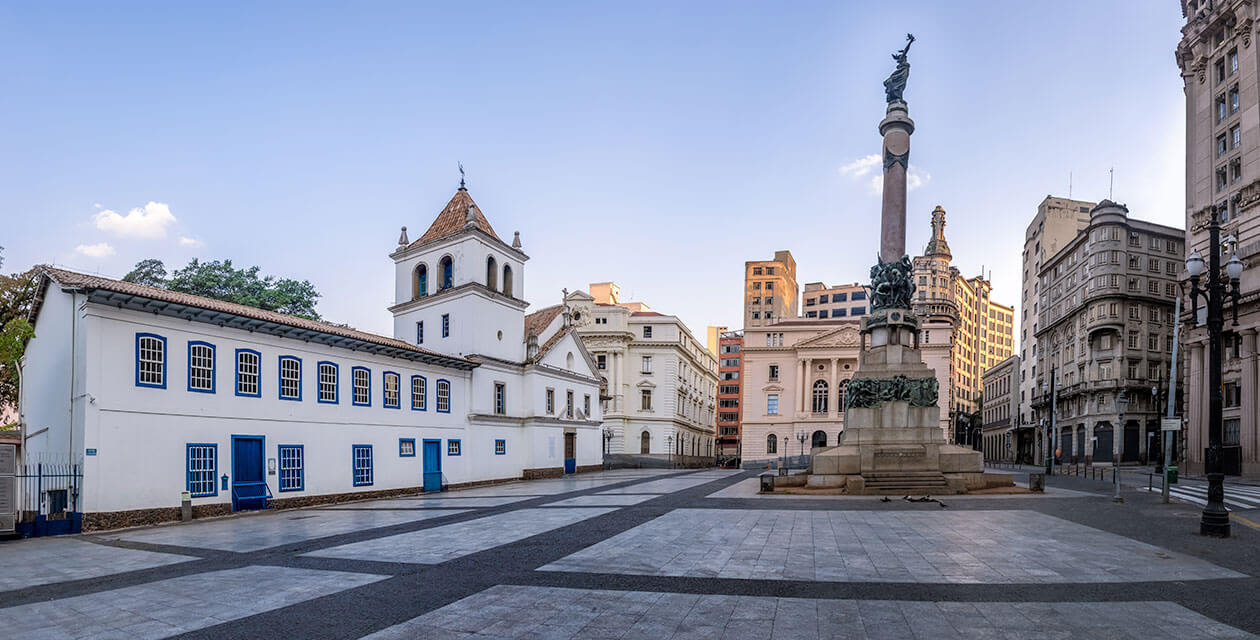 Pátio do Colégio is where the city of São Paulo emerged. Visiting Pátio do Colégio is a unique opportunity to see where it all started. The complex belongs to the Companhia de Jesus, a religious order of the Jesuits founded in 1540. The Anchieta Museum is intended to preserve the origins of São Paulo, using models, maps, and panels. It is possible to compare the evolution of São Paulo from a village to one of the largest metropolises in the world, the museum also has several objects of sacred art from the colonial period. The complex also has the S. José do Anchieta church, the P. Antônio Vieira library and the “Café do Pateo”, one of the best places in downtown to enjoy a delicious cup of coffee.

#5. Explore the Exhibitions at Pinacoteca

The Pinacoteca has the main exhibitions that arrive in the city, not to mention the permanent exhibits that occupy the upper floors of the place. The Pinacoteca is located in a privileged place: next to Estação da luz and Parque da Luz, in an incredible green area of the capital. To extend your tour here, have lunch or stop by at the charming Cafeteria Flor Café, which has an incredible outdoor area overlooking the park.

The Museum of Contemporary Art is located in a building designed by Oscar Niemeyer, offering a wonderful view of Ibirapuera Park. The collection consists of famous works in painting, sculpture, photography, and conceptual arts. To add to your experience, consider visiting the Obelisco Bar on the rooftop. This is a perfect place to see the city from another angle. Enjoy traditional drinks inspired by Brazilian culture accompanied by well-served portions.

#7. Enjoy Cocktails at a Hidden Bar

The Municipal Theater in São Paulo is one of the most important theaters in Brazil and another postcard of the city of São Paulo. The building was inspired by the Paris Opera House. Historically, the theater was the stage of the Week of Modern Art, the landmark of an important event in São Paulo. The underground of the Theater hides a gem, “Bar dos Arcos“, one of the trendiest bars in São Paulo.

#8. Observe Art at the MASP 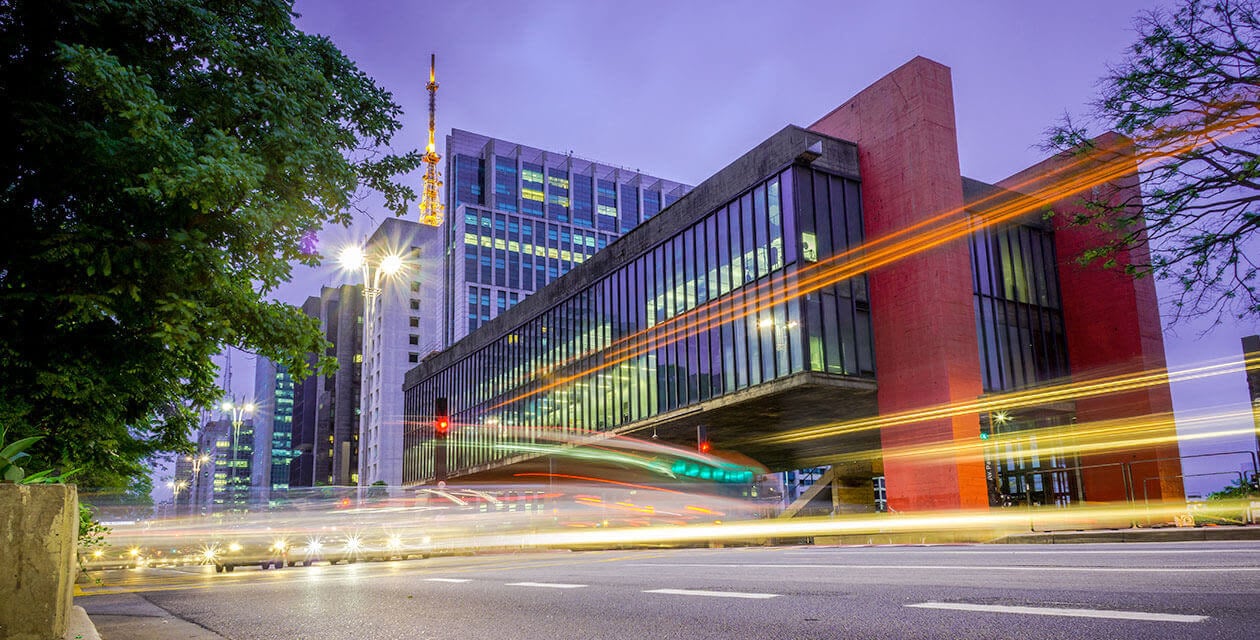 São Paulo is considered the art center of the country and offers a large choice of museums and cultural centers. Among them, the São Paulo Museum of Art, popularly known as MASP is an absolute must for art lovers, as it has a collection of European art considered as the finest in Latin America and all Southern Hemisphere. It also has a great variety of Brazilian art, prints, and drawings as well as some collections of African and Asian art, antiquities, and decorative arts. This is the only building in the world that has its main structure supported by four pillars and with a span of approximately 75 meters under it.

#9. See the Street Art in the Vila Madalena Neighborhood

In addition to bohemian life, the Vila Madalena neighborhood is also a very important cultural stronghold for São Paulo. Here is where “Beco do Batman” is, a lane with walls completely covered with colored graffiti that are changed from time to time. It is a perfect place for photography It is an open-air art gallery.

The Butantan Institute is the world-famous research lab specializing in anti-venom research and is one of the major touristic attractions in the district of Butanta in Sao Paulo. There you can learn more about snakes and vaccines by visiting a serpentarium, a historical museum, a biological museum, and a museum of microbiology. You can also see a variety of snakes kept in environments similar to their natural habitats. 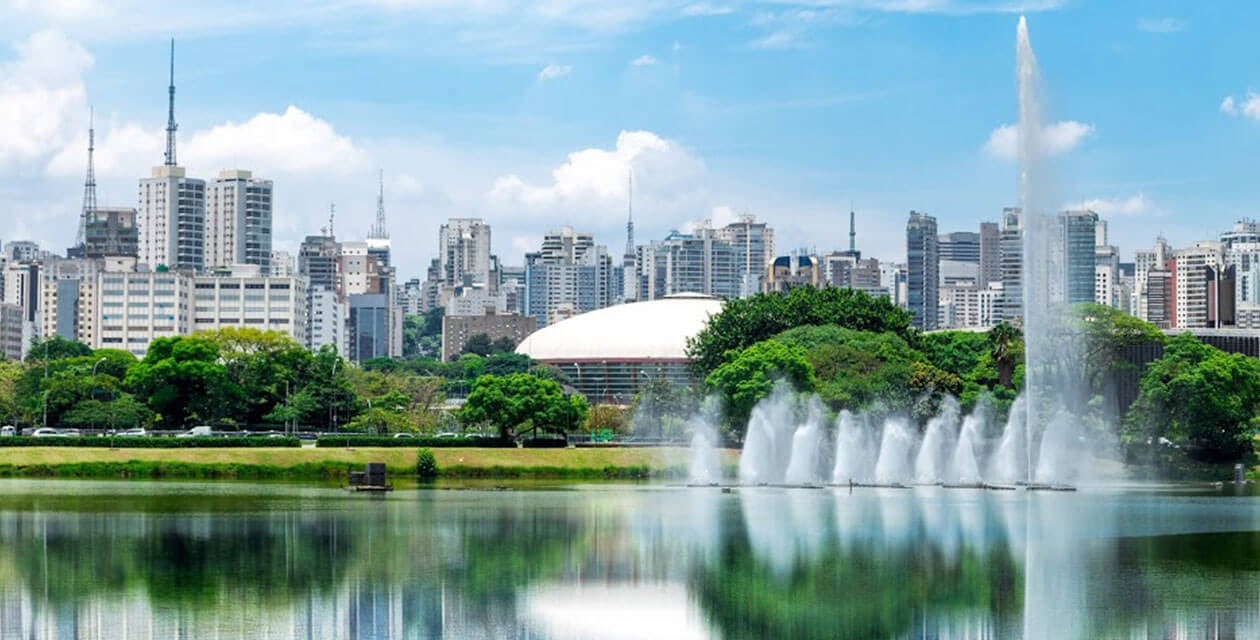 Ibirapuera, the most famous park in the city of São Paulo, opened in the 1950s and receives many visitors every day. This place is ideal for those who want to go for a walk outdoors, ride a bicycle, practice yoga, or have a picnic with friends. Inside the Park, you will find a Japanese Pavilion, the Museum of Contemporary Art, a planetary, and a sculpture garden. These are just some of the numerous attractions here.

If you are a food lover, you are going to love your stay in São Paulo as there are a lot of really good restaurants serving delicious Brazilian food. And if there is one thing you shouldn’t miss, it’s a visit to the municipal market where you can find anything from imported delicacies such as Italian salamis to tropical delights such as fresh fruits you have never seen before. There are also some very nice restaurants within the market, where you can eat and enjoy this food paradise.

Expert tip: While here, try the bologna sandwich. Among the most popular and well-known is the bologna sandwich, considered the most famous in the world. There are more than 300 grams of mortadella, in addition to seasonings and spices that make the snack even more delicious.

The largest city in Brazil has a lot to offer in terms of nightlife! Whether it’s live shows, famous restaurants, “pizzarias” or simply hanging out, there is something for everyone in this cosmopolitan city. When thinking about bars and clubs, two places are a must: Vila Madalena and Rua Augusta.

Rua Augusta is most famous for its nightlife, but Vila Madalena combines the best of nightlife and hot afternoons with a beer around Rua Aspicuelta. There you will find a multitude of bars that open around lunchtime (and, therefore, it is a great opportunity to eat a Saturday feijoada!). Stay until late at night and listen to all musical tastes.

São Paulo is famous for the best pizza places in Brazil. The Jardins neighborhood, more precisely at Haddock Lobo street, has some of the best Italian restaurants, and steakhouses, such as Rodeio and Figueira Rubayat (with a charming fig tree in the courtyard). La Macca and Gero are great choices of Italian restaurants. 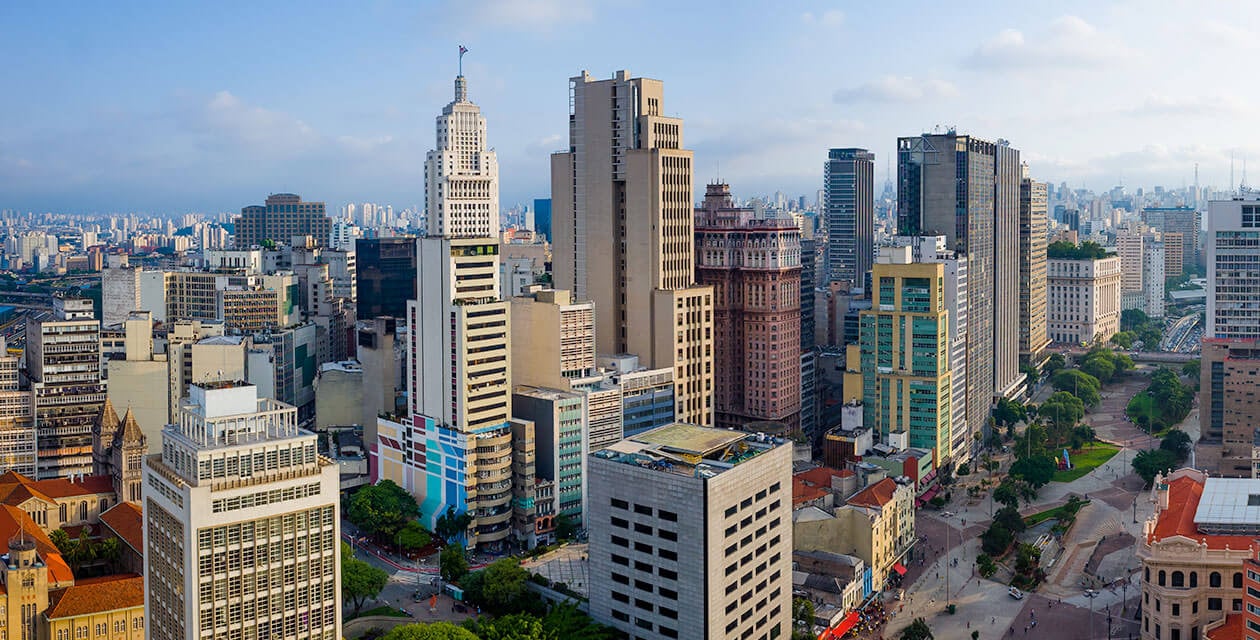 To enjoy the best view of the city’s landscape, go to the top of the Altino Arantes Building. The Santander Lighthouse is one of the most emblematic buildings in downtown. Its architectural design was inspired by the Empire State Building in New York and for 8 years it was the tallest building in the city. There you will be able to take great pictures of the city and its surroundings. There’s no doubt you’ll see for yourself how gigantic São Paulo really is. In addition to the viewpoint, the building has a chandelier with 10,000 crystals, granite floors, marble walls, and a small museum that receives interesting exhibitions.

Interested in visiting São Paulo? Take a look at some of our favorite Brazil tours which incorporate the metropolitan city in their sample itineraries.

This tour will lead you from Buenos Aires to the majestic Iguazu falls and through the Atlantic Rainforest where you will be able to enjoy a mix of landscapes. The contrast of Brazil will then become evident as you travel from natural wonders to the cosmopolitan Sao Paulo where you will be able to visit all of its highlights such as its historic center, its amazing museums, and relax at the Ibirapuera Park. You will then end this tour with Salvador and Rio.

Get a taste of some of the most beautiful and historic cities in Brazil on this 12-day tour! Travel from Belo Horizonte to sweet, colonial towns such as Ouro Preto and Tiradentes, all the way to Rio de Janeiro, the marvelous city on the coast. The highlights include trips to the amazing Inhotim open-air art museum, the baroque-style churches of Ouro Preto, Tiradentes and Congonhas, and of course the iconic sites throughout Rio de Janeiro such as Corcovado, Christ the Redeemer, Ipanema, Copacabana, and more! For an added bonus, arrange a visit to São Paulo on this tour, as it’s only a 45-minute flight from Rio!

In this Tango, Samba, and Waterfalls tour, you will enjoy a visit to Buenos Aires, before being amazed by the majestic Iguassu Falls. You then take an unforgettable railway journey on the Atlantic Rainforest Mountains and enjoy a mix of landscapes view. You will then have the opportunity to visit the megacity of São Paulo and all of its cosmopolitan highlights, before finishing your trip in marvelous Rio de Janeiro.

Looking for more information on things to do in Sao Paulo? Check out our Brazil Tours or contact our travel experts and start planning your trip to Sao Paulo.

Browse through 30 pages of travel planning tips and ideas – a great resource for planning your Brazil dream vacation.

A Beginner’s Guide to Planning a Tour of Brazil

6 Expert Tips for Traveling in Brazil

10 Best Destinations to Visit in Brazil