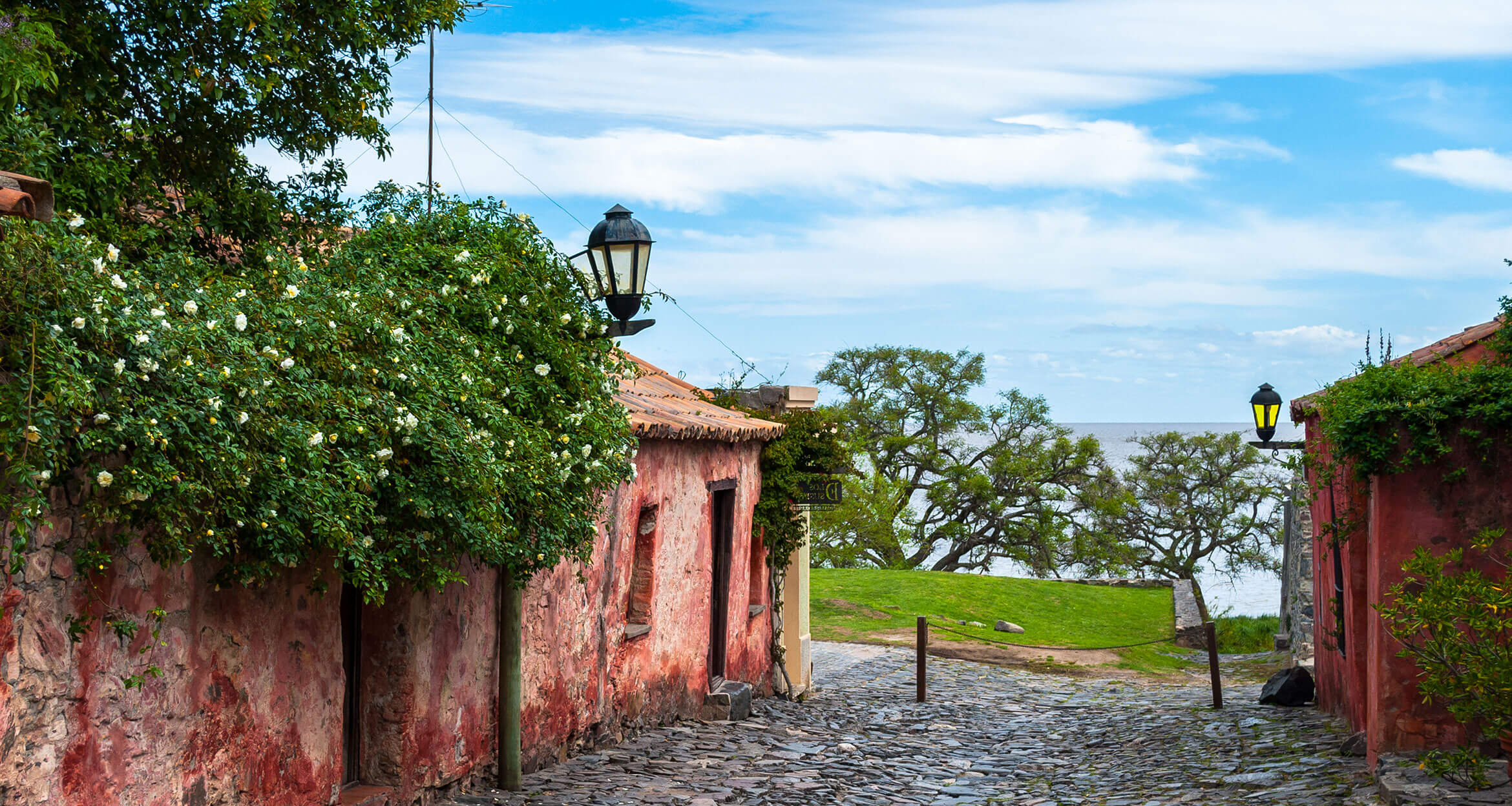 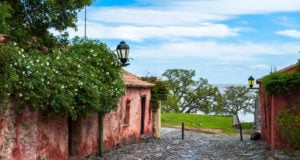 Uruguay is an excellent destination for all kinds of travelers. In Montevideo and Punta del Este, Uruguay offers fancy beaches and restaurants for those who enjoy high comfort and luxury travel. Additionally, in Colonia del Sacramento and the Uruguay wine region, you’ll experience a great, rustic atmosphere. It’s perfect for those looking for peace and relaxation. Uruguay also gives travelers access to the Rio de la Plata and the Atlantic Ocean. It’s a great country to visit all by itself, or we recommend adding Uruguay to any Buenos Aires or Argentina tour. Start planning Uruguay today.

Uruguay is what Canada is to the United States. The locals are friendly, the food and wine is delicious, and the atmosphere is calming and laid-back. Natives and tourists from Buenos Aires often take the ferry to Uruguay to unwind and enjoy the country’s natural beauty. Uruguay is truly one of my favorite places in South America.

The Portuguese were the first Europeans to set foot in Uruguay, and soon enough, the country contended between the Portuguese and Spanish Empires. During the Napoleonic Wars, Montevideo was finally occupied by a British force from February to September 1807. In 1811, José Gervasio Artigas started a revolt against the Spanish authorities and managed to defeat them on May 18 at the Battle of Las Piedras, becoming a national hero.

The newly formed nations of Brazil and Argentina continued battling for control of the region. In 1828 Uruguay was proclaimed as an independent state through the Treaty of Montevideo, fostered by the United Kingdom. Uruguay’s Independence Day was set for August 25 and is a national holiday. The nation’s first constitution was then adopted on July 18, 1830.

From Independence till 1904, Uruguay’s political scene was determined by constant military conflicts and civil wars between the Blanco and Colorado Parties. In the 1950s, economic instability caused student militancy and labor unrest, which rose during the following decades.

In 1968 president Jorge Pacheco declared a state of emergency, followed by a further suspension of civil liberties in 1972. The establishment of a 12 years civilian-military regime started the next year. This involved intense political repression and a state of terror with many casualties.

National elections held in 1984 declared Colorado Party leader Julio María Sanguinetti the new president of Uruguay. Sanguinetti served from 1985 to 1990 and made a significant change to the country’s political scene. More importantly, he implemented economic reforms and consolidated democracy. Since then, Uruguay has been a democratic republic.

Uruguay is a democratic republic that utilizes a presidential system. The members of the government are elected for a five-year term by a universal suffrage system. The president holds Executive Power with a cabinet of 13 ministers.

The legislative power is exercised by the General Assembly, which is composed of two chambers: the Chamber of Representatives (99 members) elected based on proportional representation; and the Chamber of Senators (30 members + the Vice-President).

The Partido Colorado has governed for most of Uruguay’s history, till the Broad Front got the upper hand from 2004 till 2020 with Tabaré Vázques and José Mujica. In 2020 Luis Alberto Lacalle Pou from the National Party won the 42nd Presidency.

Uruguay is known as one of the best supporters of democracy between Latin American countries. José Mujica legalized abortion, same-sex marriage, and cannabis in the following year.

Uruguay has an export-oriented agricultural sector, which represents one of the country’s primary sources of income. Meat and sheep farming occupies nearly 60% of the land. Beef and wool account for the primary income source for over 65% of the farms, followed by vegetable and dairy farming. Uruguay is also one of the world’s largest producers of soybeans, wool, horse meat, beeswax, and quinces.

The Uruguayan economy was significantly dependent on its neighbors (Brazil and Argentina) until it decided to find new strategies to gain stability. The authorities decided to decouple the economy from its large neighbors, export to new markets, and enter new industries. Its small density has allowed its economy to find more chances to grow than its neighboring countries.

Today Uruguay’s economy is relatively diversified, with its main export products being tourism, meat, and manufactured goods. Over the years, this has helped Uruguay’s middle-class and reduced inequality and poverty.

Trees grow mainly in narrow stretches along watercourses making the country forested only in a small percentage. In addition to several lagoons located along the Atlantic coast, Uruguay has four main river basins (deltas): the Río de la Plata Basin, the Uruguay River, the Laguna Merín, and the essential internal river: Río Negro.

Uruguay has ten national parks, of which five are in the east’s wetland areas, three in the central hill country, and one in the west along with the Rio Uruguay.

Large mammals are rare within Uruguay; however, 105 recorded mammal species in the country include fox, deer, otter, rodents, and other smaller species. There are still some jaguars and pumas, but mostly in the remote areas. Travelers may also spot reptiles, serpents, and other wild animals.

Uruguay is also home to a significant amount of coastal wildlife. A prevalent fish is a croaker, which is often fished. Dolphins and whales live in the waters of Cabo Polonio National Park in addition to three endangered species of sea turtles and three kinds of penguins. The coast also provides resting areas during the migration period of Seals.

Uruguay is currently implementing a National System of Protected Areas (SNAP) to promote conservation and protect the country’s natural landscapes and beauty.

Tourism in Uruguay is a meaningful part of its economy. 60% of tourists come from Argentina, 14% from Brazil and the remainder from North America, Europe and the rest of the world. For a cultural experience, you cannot miss the charming colonial towns you find by journeying up Rio de la Plata.

Colonia del Sacramento is a beautiful example of colonial and historical heritage and attracts all those tourists which love authenticity, quaint towns, and cobblestone streets. You can enjoy some of the most spectacular sunsets and romantic strolls along the harbor and the many green and flowered alleys from the town.

Montevideo is excellent for those who don’t particularly love big cities. In fact, despite being the country’s capital, the city is very laid-back and tranquil. Montevideo is a culturally vibrant city. It offers a great variety of cultural activities and houses some important historical monuments such as the Torres Garcia Museum and Estadio Centenario. Estadio Centenario is where the first World Cup in history was played.

Punta del Este is the place to go for those looking for a more upscale and resort stay. This is also the most popular holiday destination for rich and famous Argentines and Brazilians during the summer season. The period between mid-December till the end of February is generally quite busy.

Punta del Este is located on a peninsula and has beaches on both the river (Mansa side) and the ocean (Brava side). There are plenty of things to do in Punta del Este. The river waters are tamer and suited for sunbathing, snorkeling, and other recreational activities. The ocean side is perfect for adventurous activities like surfing.

Some low key clients prefer the quieter areas of La Barra and José Ignacio, which are further east from Punta del Este and generally have simpler accommodation and services.

For full immersion in nature, Uruguay has a wide choice of ranches to do various activities such as horseback riding and treks. Accommodation tends to be more humble but still good enough to guarantee a comfortable stay with a private room and bathroom and a lovely traditional breakfast.

Cabo Polonio National Park is becoming more and more popular for tourists who love rustic stay, isolated from the noisy city life. The park is home to a tiny fishing village nestled in sand dunes, and in addition to nice beaches, it hosts Uruguay’s second-largest colony of sea-lion and small rustic houses, and a precious lighthouse.

Montevideo’s Carrasco International Airport initially inaugurated in 1947 and expanded in 2009, is the main airport of Uruguay and rated as one of the world’s best four airports. PLUNA was the flag carrier of Uruguay in Carrasco.

Following a new national transport plan, from 1988 the rail system has been mainly dedicated to cargo duties rather than passenger commute services. Thereafter bus transportation became the “economic” alternative to travelers. Bus services are of good quality and often include free WiFi connection. The country has several international bus services connecting the capital and frontier localities to neighboring countries too, making this a popular way for locals to move around the continent.

Rail passenger commuter service into Montevideo was then restarted in 1993 and now comprises three suburban lines. Montevideo is easily connected to the other urban centers in the country with surfaced roads. Main highways lead to the border and neighboring cities, while numerous unpaved roads connect farms and small towns.

Uruguayans are of predominantly European origin, with nearly 90% of the population claiming European descent (mainly Italian and Spanish). Culture is, therefore, strongly influenced by Europe, mainly Southern Europe. For instance, in both Uruguay and Argentina, the gaucho tradition has occupied an important role. We can find significant evidence of this in both the art and folklore of these countries.

Throughout the 19th-century, large-scale European immigration created opportunities for different styles and designs to combine and create new drifts in the country’s contemporary culture. The main art hubs are Montevideo and the Punta del Este area on the east coast. A nice collection of museums and galleries is available for all different kinds of culture enthusiasts.

Uruguay and Argentina share similar musical traditions in terms of folk and popular music due to its common gaucho roots and tango. Another essential tradition typical of Uruguay is the candombe. Candombe is a vibrant folk dance performed at the Uruguayan Carnival, and mainly by Uruguayans of African ancestry.

It’s also relevant to mention the payada between the popular traditions, which involves two singers who take turns improvising verses to the same tunes with a guitar. Finally, rock music and the Caribbean genres are quite popular too and have a frequent presence in the national radio stations’ programs.

Why Travel to Uruguay with SouthAmerica.travel

We take care of all the details!

We'll ensure the safety of your trip.

Postpone your trip for any reason!