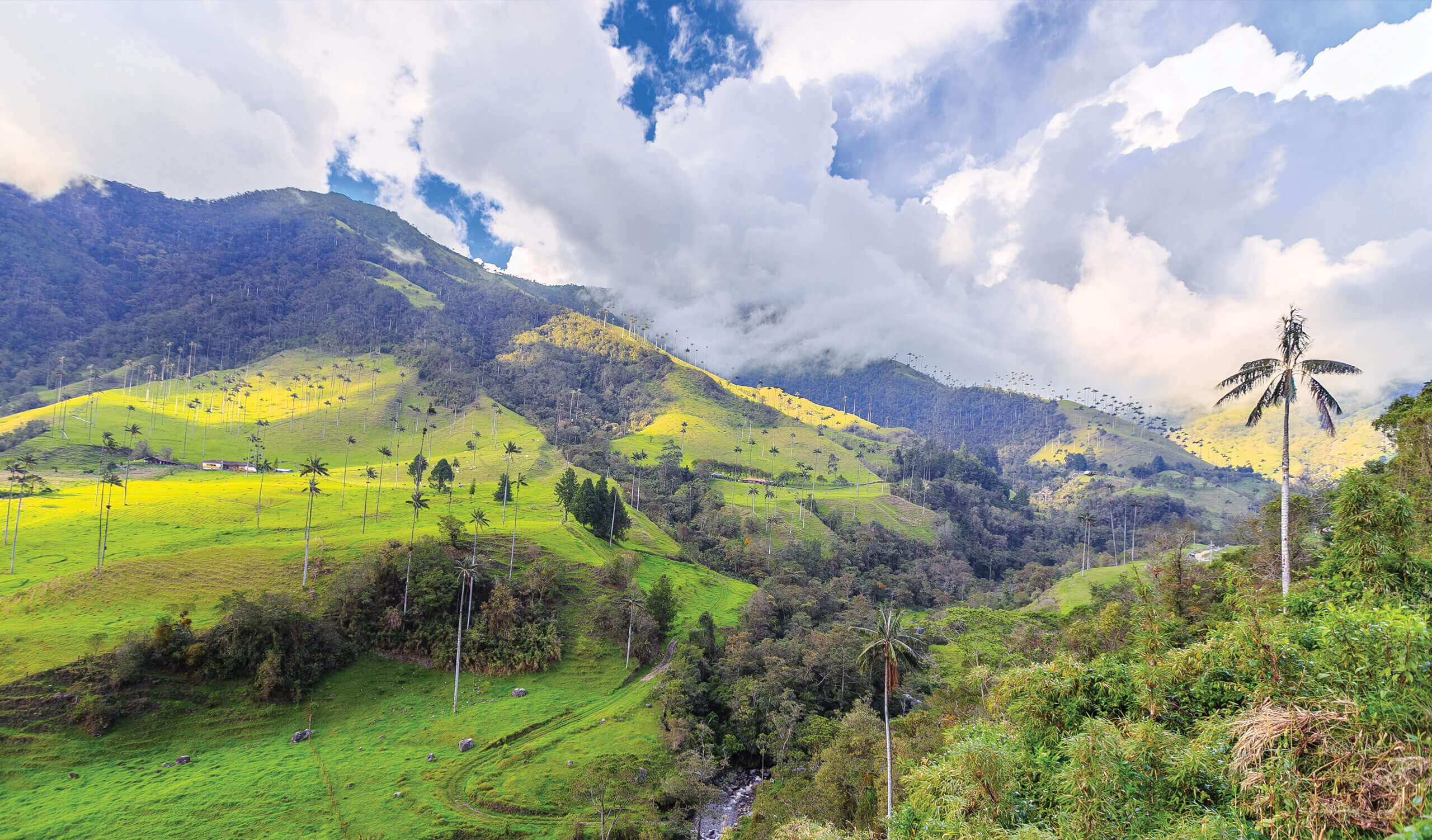 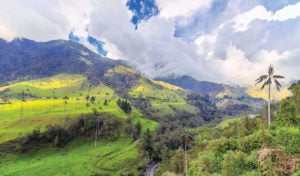 When is the Best Time to Visit Colombia?

The best time to visit Colombia is during the summer months of July and August and the winter months of December and January. These months have some of the lowest rainfall of the year. In addition to low rainfall, July and August coincide with whale watching season on the Pacific Coast and the very popular Medellin Flower Festival.

Colombia weather is not strongly affected by seasons and the time of year doesn’t make a great deal of difference in terms of weather, due to its proximity to the Equator. The factor that makes the biggest difference to Colombia weather is the altitude of the places you are visiting rather than the time of year meaning Colombia is a pleasant country to visit in any month. From the Caribbean Coast to the Pacific and from high mountains to deep river valleys, our Top 9 Colombia Tours include a really varied range of destinations and climates.

“In my opinion, the best time to visit Colombia is anytime! Colombia is one of those privileged countries that can be visited all year round because weather-wise there are no extreme differences, making all travel to Colombia enjoyable. To save money and avoid crowds, visit anytime except between December and January when most Colombians take vacation time from work. Expect more rain from April to June, however, the temperatures stay relatively constant as Colombia’s weather depends more on the altitude rather than the season.”

Visiting Colombia in Spring: March, April, and May

From December to March, Colombia experiences the driest weather, with less frequent rainfall, making it the best time of the year to visit. However, thanks to its geographic location on the Equator, Colombia experiences consistent warm temperatures throughout the year, making every season a good season for travel. Even if a couple of rain showers hit throughout the day, the weather will soon be clear, blue skies will come out, and the warm temperature will remain consistent.

Note: In this article, for easy reference, we refer to the seasons by their northern hemisphere name and with the exception of the Amazon, Colombia is north of the Equator. However, the seasons are not really comparable to those in North America and there is not a huge amount of seasonal variation other than some difference in amounts of rainfall.

Spring in Colombia (March – May)

Easter is a time of often colorful processions in Colombia. Some places can be a little busy with Colombians traveling around the country. Away from Easter, spring is a fairly quiet time to visit and as good a time as any if you don’t mind some rain during the trip.

Colombia Weather in the Spring

Typically, in the Andes, including Bogota and the Coffee Country, Easter is one of the rainier times of the year. On the Caribbean Coast, rainfall increases a little later than in the Andes – from May onwards. Wetter weather on the coast doesn’t make a whole lot of difference when out exploring as the temperature is warm and a sharp shower is not a bad thing to break the heat. At higher altitudes, such as in Bogotá or Villa de Leyva, it can feel chilly on a rainy day. In the Coffee Country, this is also one of the wetter times of year though temperatures are pleasant at around 26C / 79F by day.

Best Things to Do in Colombia during Spring

Spring is a good time to head to some of the warm parts of Colombia. This is a nice time to be on the Caribbean Coast, for example, Cartagena, Tayrona National Park, and the islands of San Andres and Providencia.

In the Coffee Country, coffee is harvested year-round and this is a pleasant time to visit traditional towns such as Salento.

For traditional Easter processions, the colonial town of Mompox is the place to go. The town is a few hours by road and ferry (the town is on an island of the River Magdalena) from Cartagena. Book well in advance.

Take a trip to the desert peninsula of La Guajira in the far north of Colombia. Stay a few nights in simple accommodation run by the indigenous Wayuu people and explore the area on a 4×4 tour.

Visiting Colombia in the Summer: June, July, and August

June to August are some of the best months of the year to visit Colombia. It is one of the driest times of year and there are a number of interesting festivals. Prices of flights to Colombia might be a bit higher at this time than at some times of year, but prices once in the country are generally not higher and aside from special festivals, it is actually not that busy despite being an excellent time to travel.

Colombia Weather in the Summer

The weather is good at this time! Every region of Colombia experiences some of their driest weather in the summer months, though in most areas that by no means rules out the rain. For the Andes, in particular, this is the best time of year to visit.

Best Things to Do in Colombia during Summer

Take a trip to the colonial town of Villa de Leyva a few hours from Bogota in Colombia’s mountainous center. If traveling in August catch the Festival of Kites in the town. Other colonial towns in the Andes are great to visit from June to August too including Barichara.

Medellin’s world-famous Flower Festival takes place in August and the streets fill with colorful floral celebrations making for the perfect excuse to plan a visit.

The Pacific Coast of Colombia is one of the wettest places on earth and as a result is extremely lush and full of life. This is the time to go if you want to go whale watching.

Much of the country’s highlights can be found near the water, like Tayrona National Park. Famed for its palm-shaded coves and coastal lagoons, the park’s natural beauty is a highlight of South America. In the nearby UNESCO heritage port town Cartagena, one of the simple pleasures is strolling the small cobblestone streets. Once the parading ground of 14th-century settlers and wealthy traders, the main squares and quaint alleys of the town are remarkably preserved, perfect for some relaxed exploring of Colombia’s most important cultural landmarks.

Download our FREE Colombia Travel Guide and get inspired to travel to Colombia. Browse through 30 pages of travel planning tips and ideas – a great resource for planning your Colombia dream vacation.

October and November are typically some of the wetter months in the Andes and on the Caribbean Coast, though temperatures change little and rainfall patterns are not very fixed. All of Colombia continues to be possible to visit at this time. Whales are still present on the Pacific Coast until October and colorful algae bloom in Caño Cristales until November.

Especially in October and November, most parts of Colombia have an increase in rainfall. In October Cartagena has its wettest month by a considerable margin. As always, temperatures are fairly constant. As with spring, the rainfall doesn’t matter that much for the traveler except those planning to spend a lot of time in the Andean regions. The water levels on the River Amazon continue to fall until November. This is a good time to stay in a beautiful eco-lodge and explore the lush and diverse Amazon rainforest on foot.

Best Things to Do in Colombia during Autumn

This is the last chance of the year to catch the spectacle of whales on the Pacific Coast or visit the colorful river of Caño Cristales before the algae fade. Head to Cali to learn salsa, or travel to the wildlife-rich plains of Los Llanos and stay on a traditional farm.

Note: there are no “fall colors” during Colombia’s autumn season like in Europe or the United States. It is always green in Colombia.

Visiting Colombia in the Winter: December, January, and February

One of the best times to travel to Colombia is from December to February. This is one of the driest times of the year, the very driest in some places – particularly the Caribbean coast. Bogota is especially pleasant during this time as travelers are left with sunnier skies and the ability to spend more time outside for example hiking in one of the national parks that surround the city. Christmas and New Year celebrations fill up popular destinations like Cartagena, so for the best boutique hotels book early.

Colombia Weather in the Winter

Everywhere in Colombia experiences a drier period from December to February. Temperatures are consistent with the rest of the year. The dry weather is particularly noticeable along the Caribbean Coast and in the Andes, making this a good time for treks. In the Amazon, this is a high water season as the river is fed by rain in countries to the south, particularly Peru.

Best Things to Do in Colombia during Winter

This is a time of celebrations in Colombia, including Christmas and New Year, but also carnival. The Barranquilla Carnival is one of Colombia’s most important folklore events and one of the largest carnival celebrations in the world. Under the warm summer sun, enjoy watching locals dress in extravagant costumes bursting with color. Parades are filled with music, dancing, and large floats.

For sightseeing, take a trip to Bogota, Colombia’s capital and largest city. During the summer, the climate is warm and dry, perfect for walking tours around the city. Stop by the famous Gold Museum or Plaza Bolívar for a unique history tour.

Trek to the mysterious Lost City in the mountain of the Sierra Nevada de Santa Marta. The trek takes a couple of days each way and involves staying in simple hammock camps at night. This is one of South America’s top treks.

This Colombia coffee and Caribbean tour is geared for those who want to see a variety of landscapes and cultures. Perfect ...

Discover the beauty of Colombia on our new Colombia Botanical Tour. Start in the capital city of Bogotá; explore the hist...

Taste and see delicious Caribbean and Andean Colombian cuisine on this Colombia gourmet tour. We can create a personalized...

Just outside the village of San Agustín can be found a well known (yet at the same time relatively unexplored), an assort...