Create a custom Cuenca Ecuador vacation for less than most premium group tours. Get started by adding destinations and activities to view Ecuador tour ideas that match your interests.

All Cuenca Tours in Ecuador

Cuenca is the capital of the Azuay Province in southern Ecuador. Besides being a beautiful city with colonial architecture, Cuenca has an active expat community and is a major seller of Panama hats. Cuenca is also known for its large number of well-preserved historical sights. When Ecuador achieved independence, Cuenca became the capital of one of three provinces that made up the nascent republic. Explore Ecuador’s most elegant city with its old and new cathedrals, and nearby the largest Incan ruins in the country.

While visiting Ecuador, consider a stop in the Galapagos Islands or a visit to the one-of-a-kind Cloud Forest.

Accessible by road, flight, or rail along the Avenue of the Volcanoes from Quito, the city of Cuenca is a major junction in southern Ecuador. From Quito, travel down the Avenue of the Volcanoes through central Ecuador, or take the Devil’s Nose Train, until you reach Cuenca. Then spend a few days enjoying this city, which is the third-largest in Ecuador. It has cobblestone streets, historical churches and buildings, colonial-era mansions, and UNESCO status. Nearby is the El Cajas National Park and the Ingapirca ruins. We recommending including these sites on any Cuenca tour. In the Cajas National Park, you can go hiking and birdwatching, or mountain biking. At the Ingapirca ruins, you can view the largest site of Inca ruins in Ecuador.

This Quito-to-Cuenca Ecuador tour is chock-full of highlights to see in Ecuador’s fascinating mainland. Ride the Cha...

The Heart of the Andes 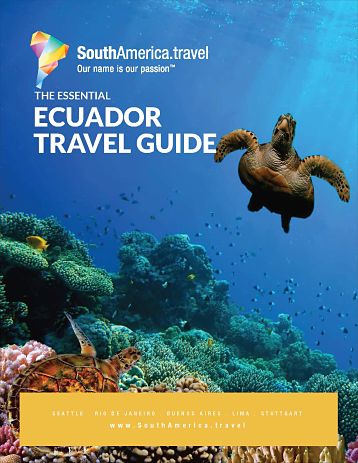 Download our FREE Ecuador Travel Guide and get inspired to travel to Ecuador. Browse through 30 pages of travel planning tips and ideas – a great resource for planning your Ecuador dream vacation.

The 5 Best Hikes in South America