“It was like dreaming, my friends & I [were] so…involved in the beauty that we didn’t speak for hours.” –Traveler visiting Salto Angel

Earlier this year I had the privilege of visiting two of the world’s most jaw-dropping destinations. Brazil is well known for the world’s most beautiful city, Rio de Janeiro, and Venezuela perhaps for the late Hugo Chavez. Both, however, contain other areas that don’t make the press very often, and that’s probably for the best. Warm, wet and fecund, the two regions detailed below are prime destinations for viewing wildlife and exploring nature’s verdant abundance. Combine Brazil & Venezuela on a tour, and you’ve paired the world’s most diverse wildlife with the world’s highest waterfall! Brazil: The Center of the Amazon Once you’ve flown into Manaus, almost anything Amazonian is accessible. And with direct flights from the US, Manaus is easily accessible too. 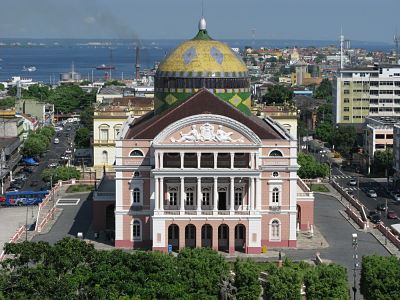 There she sits, the jungle city on the banks of the Amazon River. Actually, unless you’ve been there before, Manaus can be misleading. Located 800 miles from the mouth, Manaus is a highly unique commercial port. It’s a fascinating city with a delicious menu of jungle dishes—try the tacacá, a superb jungle version of hot & sour soup—as well as more global fare to choose from. Spending a day touring the city, including the world-famous Teatro Amazonas, the very affordable hammock shops and the meeting of the waters, is well worth it. The following morning, walk down to the river and step aboard the Tucano. This classic Amazon expedition boat is the perfect vessel for plying the teeming waters of the Amazon. Scan the trees for toucans, monkeys, sloths, and other colorful species. Meals are served on board, as dramatic sunsets bring the animals to life. There will be ample time set aside for hikes, swimming, and canoe trips up the smaller tributaries. And you simply must take part in the piranha-fishing contest!                       Getting from Brazil to Venezuela: 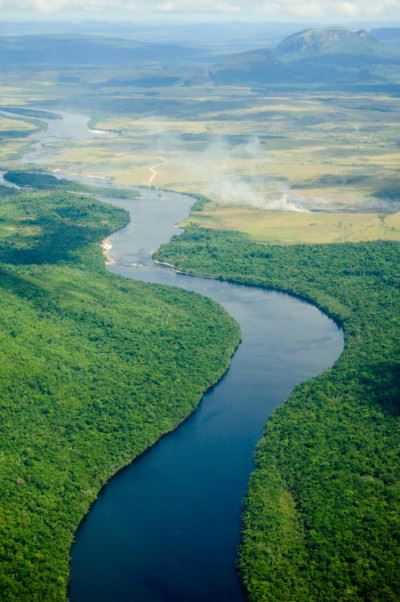 From Manaus, you can catch a bus for a 20-hour ride through the jungle. The seats recline, and sleep comes easy, but it’s actually well worth staying awake for the views along this particular leg. The further north you travel, the sparser the jungle becomes. Thick vine gives way to palm trees and, what do you know, distant views! Surreal rock formations begin to dominate this strange scenery. You are entering the Rupununi located in the south of the Guiana Shield. When I passed through this empty landscape, I realized no one could have prepared me for the ancient look, and the distinct feeling that dinosaurs were just around the corner. Along with the other passengers, the drivers will help you with border formalities. It’s only a little further to Santa Elena, where you can stay a night and enjoy a delicious dinner, either alone or with any number of other travelers preparing for their own treks to the nearby tepuis. Santa Elena may technically be a border town, but a charming and laid back atmosphere pervades the streets in the evenings. And any conversation you have here is bound to be memorable. Not too many people make it out this way and those who do have stories to tell. Canaima National Park is the next destination. There are no routes overland to Canaima, so you’ll be catching an hour-long flight from Santa Elena the following morning. Venezuela: Lost Land of the Tepuis Do you enjoy stunningly remote locations; places that seem to exist only in dreams? If you’ve seen the Pixar film Up, you may know that Carl’s balloon-house actually floats to the misty land of the legendary tepuis, in Venezuela. Specifically, it floats to Angel Falls, located in Canaima National Park. The falls really is as magical as the film depicts them. The difference is you can leave your house at…well, home! “Tepuis,” in the local Pemon Indian tongue, means “house of the gods.” And no wonder! These towering plateaus are some of the oldest rock in the world, formed around 1.7 billion years ago. Far older than the Andes, they rise thousands of feet above the surrounding country and harbor their own unique flora and fauna. From one of these tepuis flows the highest uninterrupted waterfall in the world, dubbed Angel Falls after American gold hunter Jimmy Angel discovered it by plane. Plunging from a height of 3,212ft, its waters fall such a great distance that they resemble a heavy mist by the time they reach the bottom. Angel Falls is not the easiest travel destination to reach, so that makes it all the more fulfilling when you’re standing there, at the base of one of the most mystical and impressive scenes in the world. Plan for at least two nights and three days in order to fully enjoy the journey to the falls, via dugout canoe and a hike through the wonderful gallery forests. Remember, Angel Falls may be the highlight of Canaima, but there is so much more to explore in this emerald area. If you like to avoid tourist groups, you may hike Auyan-tepui. Very few travelers make it up this surreal plateau, where carnivorous pitcher plants cling to bare rock, and dramatic views from the crown of the falls easily surpass anything you’ve seen before (or since). Ending a trip with Angel Falls is a fantastic idea. When you’re ready to head home, you can take a one-hour flight to Ciudad Bolívar, then a one-hour flight to the capital of Caracas. From there, you can catch a flight back home and remind yourself that where you’ve just been is not a dream, it’s real!