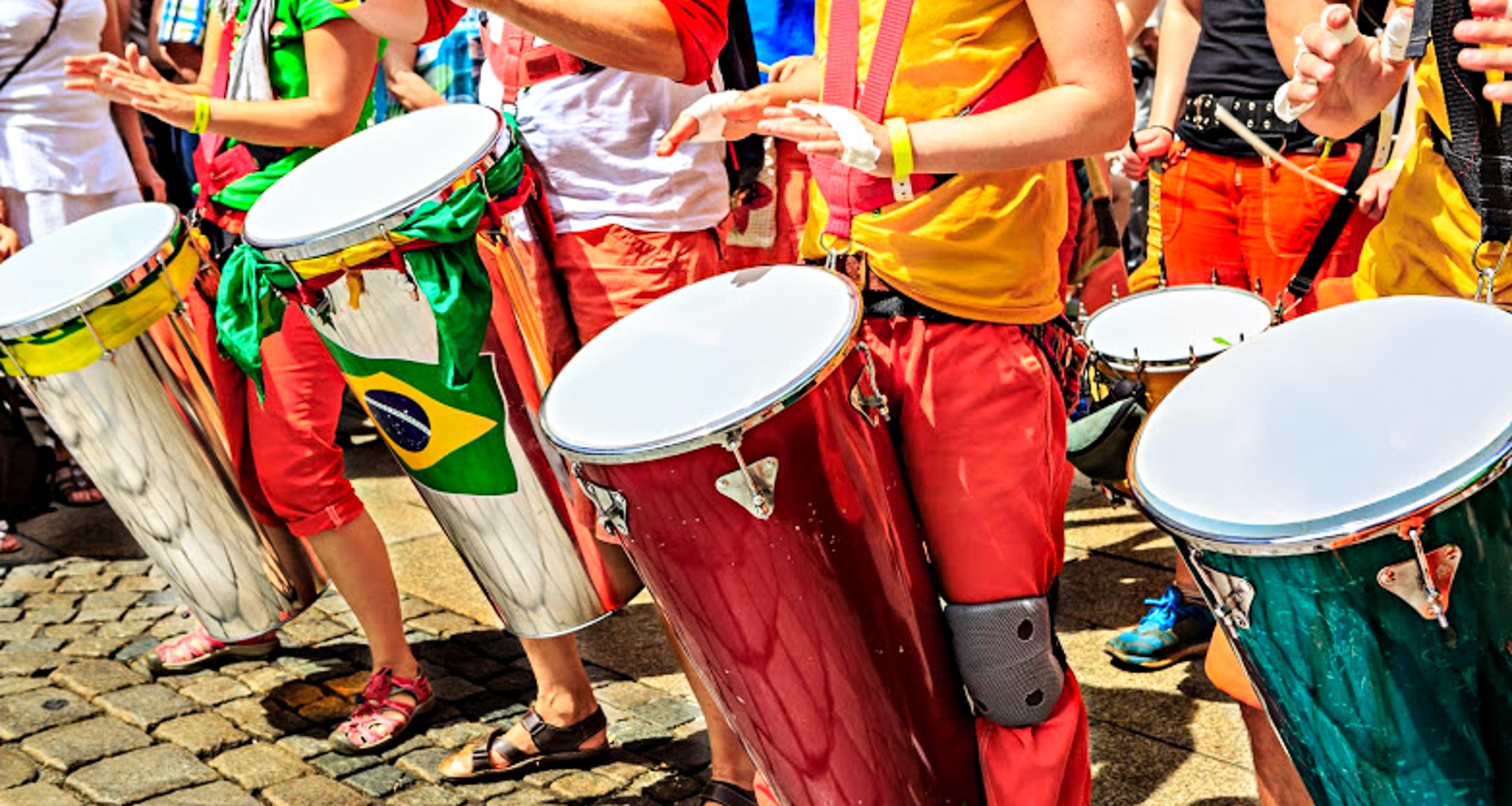 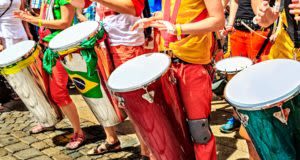 Our Rio Carnival tours will see you travel to Brazil for the world’s largest party! During Carnival, the cariocas (Rio’s inhabitants) celebrate with samba dancing, colorful costumes, delicious food and drink, blocos street parties and masquerades. The beating heart of the Rio de Janeiro Carnival is the Sambadromo parade, where over 75,000 people gather to see samba schools strut their stuff each night.

A Rio de Janeiro Carnival tour will guide you through the highlights, taking in parties and parades as well as some of Rio’s top highlights like Sugarloaf and Corcovado. Throughout Carnival, there are multiple parties and parades, bands playing and street parties guided by drummers and singers who will encourage you to dance with them as they make their way through the streets of Rio de Janeiro. For the largest organized street dance, head to the city center. There, you will hear Brazilian music blaring and see locals draped in colorful costumes and elaborate headpieces. Rio is not the only carnival in Brazil, but it is the largest and certainly the most famous. Salvador and Olinda also have large carnival celebrations. Customize your tour of South America and include Rio Carnival Parade in a tailor-made travel package, or read on for more on trips to see Carnival in Rio.

Arrive in Rio for Carnival’s Winner’s Parade and combine it with the gems of the colonial hinterland of Rio: T...

This tour is a highlight! You’ll play on the best golf courses of Brazil and travel from Sao Paulo, the business cap...

It’s Carnival fever! Gear up for a celebration of samba music, elaborate costumes, and vibrant nightlife known as Ri...

For those that want a taste of Rio’s famous Carnival without five solid days of all-consuming dancing and celebrating, take a tour during Champion’s Parade. Champion’s Parade is smaller than Carnival but has the same passion and buzz as the main event. The best seven samba teams of Rio's Carnival parades are celebrated. Instead of an environment full of tense competitors, it is an environment of encouragement and respect for the samba schools' dedication to the art of dancing. Held the week after Carnival, Rio returns to closer to normality, meaning less congested streets, and locals returning to the workplace. Hotels are typically a bit cheaper and more lenient with their minimum stay policies. For example, during Carnival, you’ll need to book 4-5 nights as a minimum. For Champion’s Parade, hotels typically require only a minimum of 2 nights. Seeing Rio's beaches, Sugarloaf and Corcovado is easier after the main Carnival too, so another reason to consider travel during the Champion's Parade.

How to buy tickets for Rio Carnival

We include tickets to see the parades in Rio's Sambadrome in our Rio Carnival tour packages. The Sambadrome is a specially designed stadium just for the Carnival. There are tickets available for different sectors, varying in price and how good a view you'll get of the parades. We particularly recommend tickets in sectors 7, 9 and 11. A part of a Rio Carnival tour booked through us, you'll be met at your hotel, taken to the Sambadrome, have assigned seating and get taken back to your hotel afterwards - in the early hours of the following morning. This works in the same way for the parades during the main carnival, and the winners' parade.

Add Buenos Aires - Consider flying into Buenos Aires, the capital of Argentina, before you begin your Brazil vacation. Buenos Aires is known as the Paris of South America, because of the influx of European pioneers who brought their cultural tastes and styles to the southern hemisphere. Here you can shop for antiques, go bike riding, or take a cruise along the Tigre River Delta to see the stately mansions on the outskirts of the city. The city is also known for its excellent wine, steak, and passionate tango dancing, so make sure to catch a dinner and tango shows. Add the Amazon Rainforest - If you have time, add a trip to the Brazilian Amazon rainforest, where you can spend a few days relaxing at a lodge deep in the forest, as well as hiking and enjoying the incredible wildlife. Add the Iguazu Falls - Another breathtaking South America travel destination is the Iguazu Falls, one of the world’s largest waterfalls. It straddles the border between Argentina and Brazil and is the perfect stop-off on your way between the two countries.
One More Thing...
Just a few more details to create your perfect trip:

When is carnival in Rio?

The date of carnival changes each year and depends on the date of Easter. It starts on the Friday before Ash Wednesday with the biggest parades held on the Sunday and Monday, then on the following weekend the Champions’ Parade is held.

The History of Rio Carnival

Carnival’s roots lie in ancient Greek traditions. The drunken revelry of the legendary festivals worshiping Dionysus, the god of wine, later influenced Roman customs. The Romans put their own spin on things by trading clothes for a day with their slaves and drinking together as equals. Later the Catholic Church amended a few points, ensuring the celebrating occurred before the first day of Lent, Ash Wednesday. This way the long period of self-denial could be somewhat balanced by the preceding festivity of indulgences. Think of bachelor parties before the wedding. Not altogether dissimilar. Since then, Carnival was spread, especially by the Portuguese explorers, to dozens of countries around the world. It is perhaps one of those very few gems of colonization if that’s not a complete oxymoron. The celebrations vary considerably; though costumes and music are common elements, and nowhere else does the party shine quite as brightly as in Rio.

The reason most people associate Carnival with Rio de Janeiro is due to the wildly popular flavor that samba has paired with an already successful Carnival. Samba evolved from candombe, African drumbeats imported during the West African slave trade. In the early 20th century samba rose to prominence, with recordings expressing a much slower, romantic mood. During the 50’s a new style of samba was incubated within Brazil’s favelas (or shantytowns), known by the name of samba-de-batucada. Much quicker and more powerful than previous incarnations, this was the flavor of samba that would emerge as the sound the world most associates with Carnival.

Today, samba’s popularity has reached fever pitch. Sambadromes (stadiums) have been constructed around Brazil, reminiscent of the Roman Coliseum. After all, it is a competition. Other elements of Rio’s particular Carnival have borrowed from the invention of cars, colorful characters from Rio, and now corporate sponsors as well. Today, Rio’s Carnival groups can be compared to professional sports teams. Like a sports game, teams fiercely compete in an entertaining and highly structured environment.

Other carnivals in Brazil and South America

Salvador Carnival – The capital of the Northeastern Brazilian state of Bahia and the largest city on the northeast coast typically begins its Carnival celebrations early! It is said this is a much more intimate Carnival than Rio’s and is a close second when it comes to greatest Carnival celebrations ever. Parties run for six consecutive days, starting around 5 PM each afternoon and run until 5 AM and beyond the next morning.

Cajamarca Carnival – In the northern mountains of Peru, is known for its colonial charm, but during the Carnival season the town changes, with a colorful and lively festival. At the end of Carnival week, the King of the Carnival parades into town singing traditional songs, and then the locals symbolically bury the king.

Oruro Carnival, Bolivia
Located near Lake Uru Uru and southwest of Cochabamba, this highland mining town is a popular destination for Bolivian party-goers. The distinctive traditions of the present-day Carnival has its roots in ancient Andean history.

Barranquilla Carnival, Colombia
Another major Carnival, this is a serious rival to Brazil’s carnivals. The city is not normally a popular tourist attraction, but that all changes during carnival and visitors decent from around South America and the world to take part in the semi-organized chaos!