Brazilian cuisine is heavily influenced by African as well as Italian, Chinese, Japanese, and Iberian cuisine. You can easily find traditional Brazilian restaurants, street markets, and cafes around the country for delicious dishes and treats!

Food in the south of Brazil

Like its neighbors Argentina and Uruguay to the south, meat and mate are popular in the southern region of Brazil. Churrascos (Brazilian barbeques) are king here so be sure to make your way to a rodizio, or all you can eat meat buffet. Yerba mate, known locally as chimarrão, is a highly caffeinated tea sipped through a straw from a hollowed out gourd. Southern Brazil is also home to many families of German descent so expect good beer and colorful Oktoberfest activities.

Food in the center and west of Brazil

The Central-West region of Brazil is home to the Pantanal which is the largest tropical wetland ecosystem in the world. Fish is therefore widely consumed throughout the region and pacu is a commonly eaten fish that is roasted, baked, or stuffed with farofa (toasted cassava) and banana. Dried meat, plantains, and empadãos (literally translated as big empadas, or pies filled with chicken, cheese, or corn) are also popular throughout this region.

Food in the southeast of Brazil

The Southeast is home to three of Brazil’s largest cities which are home to immigrants from all over the world including Italy, Japan, Lebanon, among many others. Because of the melting pot of cultures, you can expect to find just about any type of cuisine and inventive fusion dishes throughout big cities like Sao Paulo, Rio de Janeiro, and Belo Horizonte.

One of the national dishes of Brazil that is popular in the southeast is feijoada which is a stew of black beans, meats, and spices served with rice and farofa. Because it takes so long to prepare this dish, it is often served on Saturdays. Minas Gerais in the interior is home to some of the country’s best dairy products and its namesake cheese, quiejo Minas, is not to be missed.

Food in the north-east of Brazil

Brazil has more than 4,600 miles of coastline so seafood of all kinds is enjoyed throughout Brazil’s 19 coastal states. The northeast is said to have some of the best seafood available and dishes like Acaraje, Moqueca, and Bobo are a must when visiting this corner of the country. Bahia was once the terminus of the transatlantic slave trade so there is a heavy influence of African ingredients and traditions in the dishes you will eat here. The secret ingredient in the cuisine of the northeast is Dende oil, or red palm oil, which gives the foods a rich, distinctive flavor.

Food in the north of Brazil

Unlike other parts of Brazil, the cuisine in the northern half of the country is less influenced by foreign ingredients as it is surrounded by rainforest and isolated from the rest of the country. The north is home to the Amazon rainforest and you can expect to enjoy some of the freshest exotic fruits like acai, guarana, cupuaçu, graviola, cajú, and acerola while you are here.
Fresh fish is also widely consumed throughout the north as there are more than 1,200 species of fish found in the freshwaters of the Amazon and its tributaries. Some of the most popular fishes include pirarucu, surubim, and tucunaré. While in northern Brazil, we recommend trying Tacacá which is a unique and delicious soup made from cassava, shrimp, peppers, and tingly tart jambu leaves. The jambu leaves produce a slight numbing sensation in your mouth so it is definitely a different kind of soup than what you are used to at home!

Fifteen foods and drinks to try while in Brazil 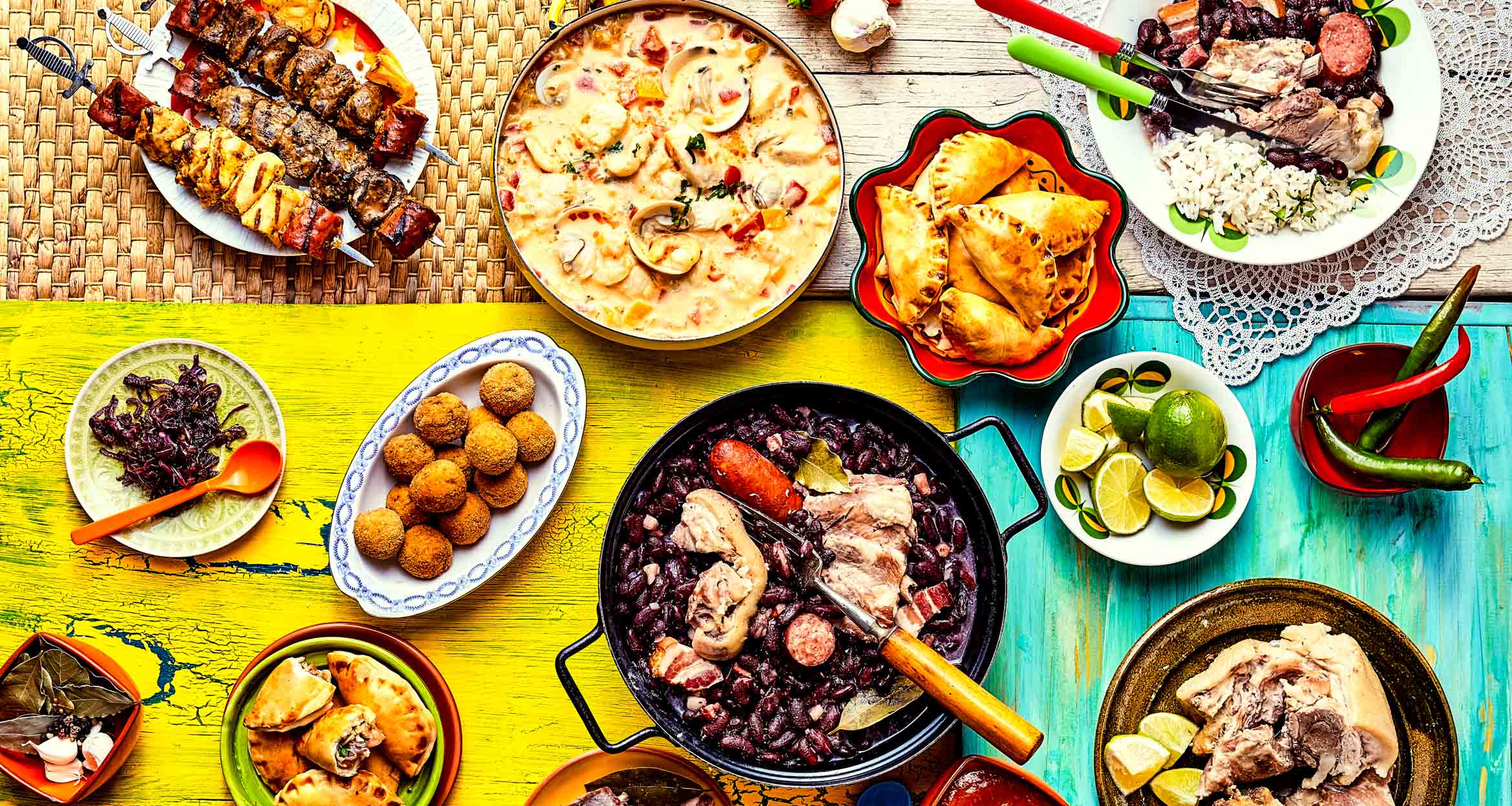