How many volcanoes does South America have? South America has over 200 volcanoes! Situated mostly in the Andes, they offer lovely landscapes with their snow-capped cones. If you feel a little adventurous, you can climb them to enjoy an amazing view from the top. Here are 5 Amazing Volcanoes in South America according to SouthAmerica.travel.

First on our list of volcanoes in South America is Volcano Osorno. This is the most famous volcano in Chile as it is one of the symbols of the Lake Region landscape. It is also one of the most active volcanoes in the southern region of Chile. Despite its height of 2,652 meters (8,701 feet) — considered low for a mountain — the top of the volcano is always entirely covered in glaciers.

During Chile’s winter season (from July to September) you can go skiing on the volcano. If you feel a little adventurous, take our Lake Volcanoes Adventure Tour and hike the Osorno Volcano to enjoy the breathtaking view of Lake Todos los Santos and the surrounding volcanoes such as Tronador. Admire the waterfalls of Petrohué, on the foot of the Osorno Volcano, before taking an incredible rafting trip on the Petrohué River. 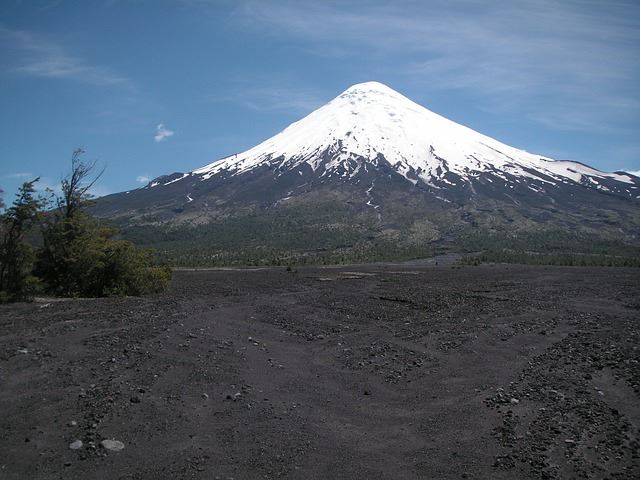 Second, on our list of volcanoes in South America is Villarica Volcano. This is one of Chile’s most active volcanoes and also makes for a great Chile vacation destination. Indeed, it is one of the most climbed stratovolcanoes worldwide. Hikes to the crater start from the town of Pucón but depending on volcanic activity and weather conditions they can be forbidden. It is also possible to see these volcanoes from the sky with a helicopter tour, or during the winter (July to September) you can go skiing on the northern slopes.

3. Avenue of the Volcanoes, Ecuador 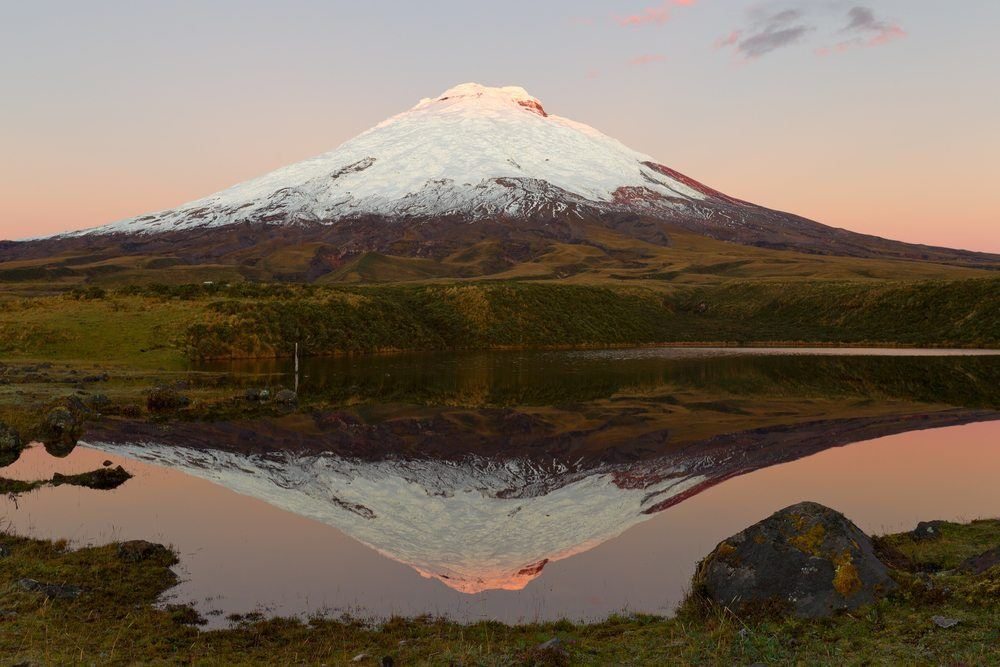 With a height of 5,897 m (19,347 ft), Cotopaxi is the highest active volcano in Ecuador. It has been dormant for over 70 years and from its recent history it is an unusually long interval, so there is always a risk that it will erupt again soon. Nevertheless, Cotopaxi is a popular touristic attraction as you can climb on top of it, on a two-day guided climb (you stay the night at a refuge). Although less than half of climbers actually reach the top. Another famous volcano in Ecuador is the active stratovolcano of Tungurahua.

You cannot go near it right now as it has recently undergone several explosions that produce huge ash plumes. However, it is still nice scenery to admire from the natural hot springs of Baños. To see these volcanoes and other highlights of Ecuador, take our Heart of the Andes Tour. It will lead you from Quito to the Avenue of the Volcanoes.

Meet Ecuadorians and learn more about their culture and traditions by visiting small communities such as Peguche and Otavalo market. Take a ride on the Devil’s Nose train, visit some Incas ruins and discover the Avenue of Volcanoes and its landmarks: Cotopaxi and Tungurahua. 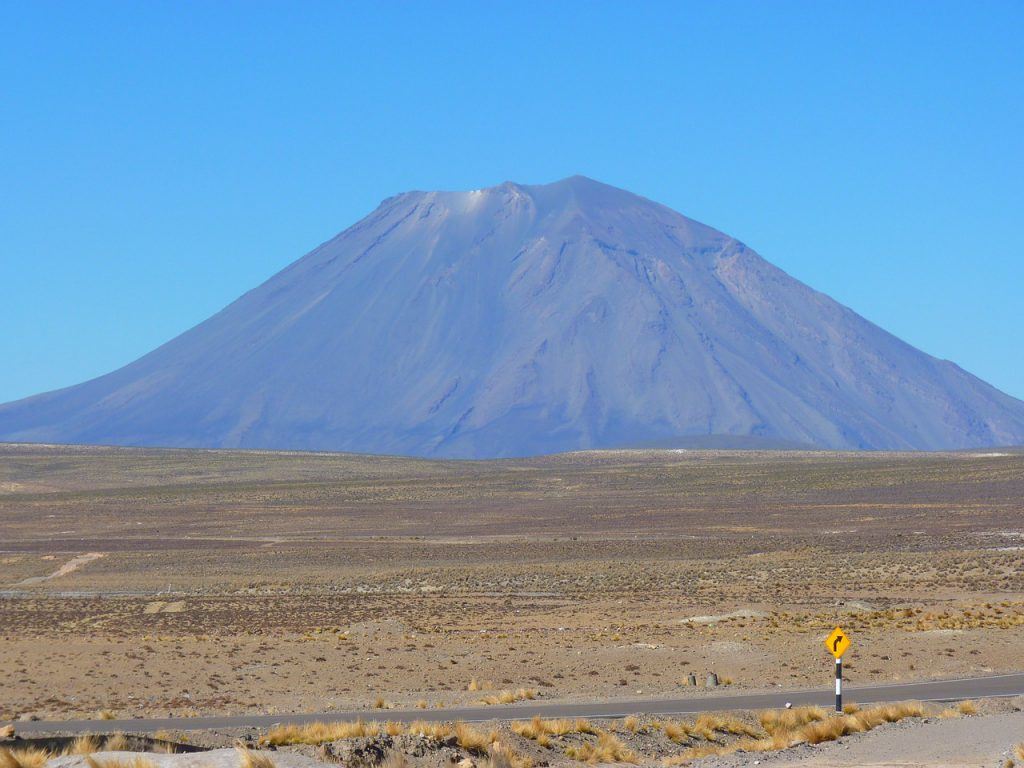 El Misti, situated near the city of Arequipa, is a stratovolcano that stands at 5,822 meters (19,101 ft) above sea level and is the most well-known volcano in Peru. Its last eruption was registered in 1985. El Misti is not the only peak around Arequipa, there are also Chachani, the highest mountain of the region with an elevation of 6,057 m (19,872 ft), and Pikchu Pikchu, an inactive volcano. Though, it is the most popular to climb.

At the top, you have spectacular scenery of Lake Salinas and Arequipa. It is best to climb between July and November and although it is considered as one of the easiest climbs, you need an ice ax and even sometimes crampons to get to the top. Discover El Misti and Peru’s other highlights on our Essence of Peru Tour.

On this tour, learn more about the Inca civilization with visits to Cusco and Machu Picchu, the Spanish conquistador’s history in Lima, and the mysterious Nazca lines. Enjoy the view of the peaks surrounding Arequipa and the peaceful Colca Valley. 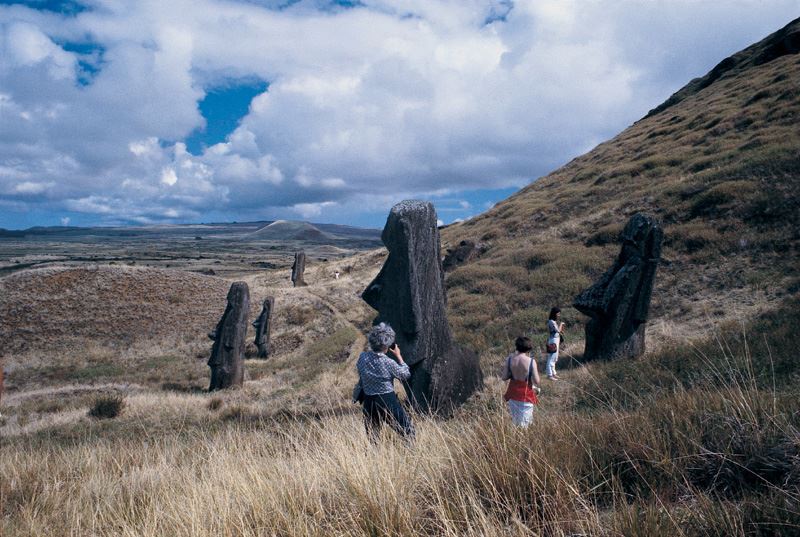 Last on our list of volcanoes in South America is Easter Island. Easter Island has three extinct volcanoes that are situated in each corner of the island: Rano Kau, Terevaka, and Poike. These volcanoes are not very high. The tallest is Volcano Terevaka at 507.41 m (1,664.73 ft). You can easily climb to the top and go inside their craters.

The crater of Rano Kau is one of the island’s only three natural bodies of freshwater. In the Rapa Nui National Park, a UNESCO World Heritage Site, you can also go into Rano Raraku. This is a volcanic crater famous for being a quarry to supply the stone to build the Moais.

If you want to explore these volcanoes, consider our Easter Island tour packages including Santiago & Easter Island Tour. On this tour, visit Chile’s highlights such as metropolitan Santiago, colorful (and coastal) Valparaiso, and Easter Island and taste Chile’s best wine on a winery tour.

While visiting Easter Island, not only will you see these amazing volcanoes, but you will also discover and learn more about this mysterious island and its Moai in different stages of completion and sizes.

Create a custom tour and a member of our Travel Team will be in contact with you within 24 hours to begin planning your trip to South America!