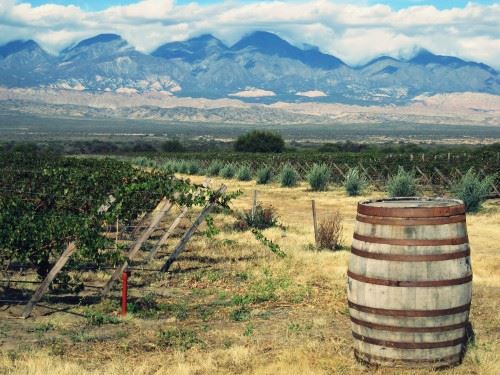 The arid region of Northern Argentina and Southern Bolivia is chock-full of naturally epic arenas to explore. Think cowboys & horses in the Wild West, but substitute ‘cowboys’ for ‘gauchos,’ ‘horses’ for llamas (though there are horses too), and ‘Wild West’ for a much better-kept secret. In fact, remember Butch Cassidy and the Sundance Kid? After they robbed all those American trains, they escaped the law and ended up here. Hopefully when you think about visiting, it’ll be for different reasons. And there are plenty of them. Explore superb landscapes by train and sip wine in the areas surrounding two exemplary cities located where Bolivia and Argentina meet. Read on to find out more, or view our Argentina Tours and Bolivia Tours, as well as our South America Wine Tours. We can also combine Argentina & Bolivia Tours with a custom itinerary. 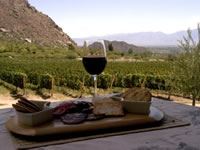 Sitting tranquilly at the foot of the Andes, and easily reached by plane from any of Bolivia’s major cities, Tarija enjoys a spectacular Mediterranean climate. And by Mediterranean, I do mean to imply wine and charming, romantic people. Back during Bolivia’s post-revolutionary period, Tarijeñans had the option to join Argentina or remain loyal to Bolivia. They opted for the latter, and as a result they are respected immensely for their patriotism and loyalty. Still, Tarija stands apart from the rest of the country. One of the reasons for this is best expressed in a local saying: “¿Si usted no va a beber el vino en Tarija, entonces por que venir a Tarija?” Translation: “If you are not going to drink the wine in Tarija, then why come to Tarija?”

The word is beginning to spread. Bolivia has a wine country! And if you have a hard time being in the moment, the knowledge that Bolivia does not export its wines should help you savor the first glass that reaches your lips. So is it any good? To answer this, start off at a bodega familiar with the local wines for some shoptalk and comparisons. La Vinoteca is just such a place, where they will open any of the dozens of different Bolivian wines they carry. Order a plate of picados—ham, cheese, pickled onion bits and olives arranged in a tapas-like appetizer—to munch on while you deliberate. When you have learned enough to further pique your curiosity, consider visiting any, or all, of the following: Campos de Solana’s tasting room glitters with medals earned in a variety of world competitions. Their Reserve bottle won a tasting competition in Atlanta, GA. Sip their selection before heading over to Casa Vieja, a 400 year-old Jesuit convent with a view of the Andes towering above their vineyards. Just getting there involves crossing gorgeous gorges and rock formations so strange you’re likely to forget about wine until you arrive at the door. Once there, imbibe from a spread of ten different wines: both sweet and light whites, tannic reds and less tannic reds, and a grape infused with singani (which is similar to eau-de-vie, or grappa if you prefer). If your teeth are still white, spend an afternoon with Jesús, the owner of Hosteria. Let yourself be influenced both by his wine—grown from Sangiovese vines—and his cheerful personality.

Getting From Tarija to Salta

After a couple days in Tarija, it’s easy to adjust to a new, relaxed normal. You’ve checked out the Bolivian wine country, but what about Argentina’s? The best part is that it’s only one bus ride to Salta from Tarija. Watch the pueblos come to life along the way. You will follow the river to Bermejo, with views of the tropical foliage filling the valley.  A light breakfast snack will be provided, and there will be a reminder to adjust your watch by an hour. You will be helped through customs before continuing through northern Argentina, arriving in Salta by midday. 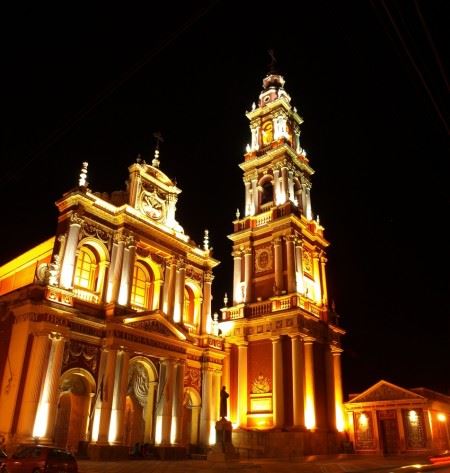 I will never forget the vivid landscapes surrounding Salta, a sleepy, Andean city in the far north of Argentina. Though there are plenty of mountain peaks to gaze up at when you arrive, you’re already standing 7,000 feet above sea level. Brave the thin air, however, and your rewards are rich. Along with horseback riding, rafting, trekking and a visit to the ancient ruins of Tastil, travelers can ride the fifth highest railway in the world.

Train to the Clouds 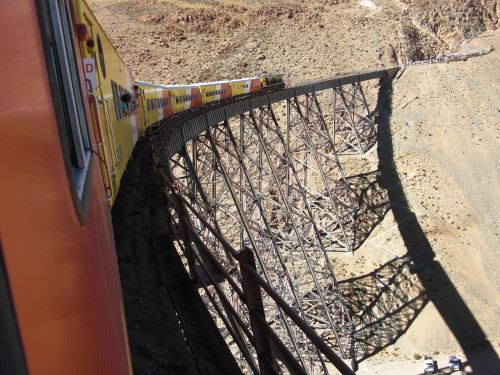 El Tren a las Nubes boasts 29 bridges, 21 tunnels, 13 viaducts, 2 spirals (!) and 2 zigzags. Originally designed to provide a route between Argentina and Chile, American Richard Maury designed the railway to utilize the very turns in the tracks to sufficiently slow down or speed up the train. The train leaves Salta every Saturday morning (Apr.-Nov.) and returns around midnight. Meals are served along the way, and passengers can gaze out at small Andean villages, tobacco farms, dramatic gulches and the famous altiplano. And there’s more in store when your train returns. View our Train to the Clouds Tour.

Highest Vineyards in the World

What does a microclimate composed of high elevation and low humidity produce? Torrontes Riojano wine! A number of vineyards around Salta grow at nearly 10,000ft. First, spend a night in Colomé to enjoy the Cabernet-Malbec before moving on. Cafayate Valley wines have won numerous international awards for their fruity yet dry personality. Originally grown by the Jesuits in Mendoza, Torrontes wines are unique to Argentina. Pass through the exquisite Quebrada de las Flechas (Gorge of the Arrows) and visit four different vineyards in laid-back Cafayate, just don’t forget to take advantage of the cheese buffet. Ultimately, the joy of experiencing Tarija and Salta is a kind of dramatic, arid and decadent secret that begs to be shared later with friends.

We don’t have this exact itinerary listed on our website, so contact us if you are interested in seeing Salta and Tarija. You can also view our Argentina Tours and Bolivia Tours, as well as our South America Wine Tours.

Contact us for a free Argentina and Bolivia tour quote to Salta and Tarija!